How to Produce a Downtempo, Trip Hop Beat. Reverb Rating. Cubase Pro 8 gives you four different reverb plug-ins to choose from, but which one should you be using? 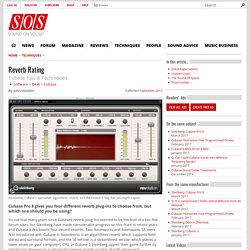 It’s not that many years since Cubase’s reverb plug-ins seemed to be the butt of a fair few forum jokes, but Steinberg have made considerable progress on this front in recent years and Cubase 8 Pro boasts four decent reverbs. Two, Roomworks and Roomworks SE, were first introduced with Cubase 4. Roomworks is an algorithmic reverb which supports both stereo and surround formats, and the SE version is a streamlined version which places a lower strain on your computer’s CPU. In Cubase 5 Steinberg upped their game further by introducing Reverence, a convolution-based reverb capable of both stereo and surround-sound operation. Mixing with Reverb: How to Use Reverb for Depth Without Creating a Mess. 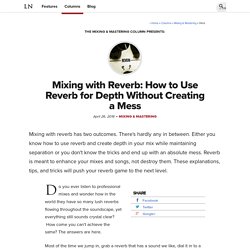 There's hardly any in between. Either you know how to use reverb and create depth in your mix while maintaining separation or you don't know the tricks and end up with an absolute mess. Reverb is meant to enhance your mixes and songs, not destroy them. These explanations, tips, and tricks will push your reverb game to the next level. iZotope Running Free Audio Mixing Masterclass With Enrique Gonzalez Müller. How To Separate The Kick Drum and Bass Guitar In Your Mix – Audio Issues.

Processing Vocals Part 5 – Compression. How do you use your Master Fader? Quote: +1 Also use this kinda system. 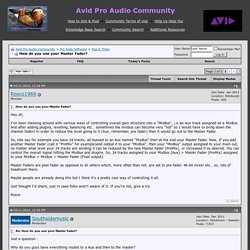 Found it once in a forum and have been using it since then. The "Master section" is made up of 3 channels/tracks. Headroom & Master Fader. Know how to use the Pro Tools master fader properly and you need never suffer clipping in your mixes again. 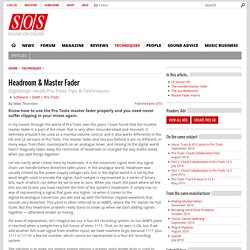 In my travels through the world of Pro Tools over the years, I have found that the humble master fader is a part of the mixer that is very often misunderstood and misused. It definitely shouldn't be used as a monitor volume control, and it also works differently in the HD and LE versions of Pro Tools. The master fader and mix bus behind it are no different, in many ways, from their counterparts on an analogue mixer, and moving to the digital world hasn't magically taken away the restriction of headroom or changed the way maths works when you add things together! Let me clarify what I mean here by headroom. Mixing - Bassline Not Audible on Laptop Speakers. The 4 Step Listening Check For Your Mix.

I think the hardest part of a mix is the end. 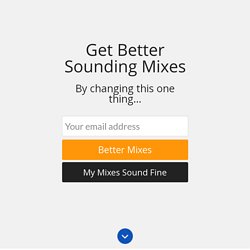 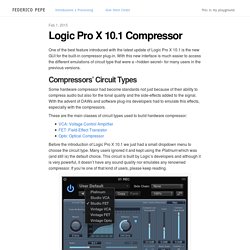 With this new interface is much easier to access the different emulations of circuit type that were a «hidden secret» for many users in the previous versions. Compressors’ Circuit Types Some hardware compressor had become standards not just because of their ability to compress audio but also for the tonal quality and the side-effects added to the signal. With the advent of DAWs and software plug-ins developers had to emulate this effects, especially with the compressors. These are the main classes of circuit types used to build hardware compressor: Before the introduction of Logic Pro X 10.1 we just had a small dropdown menu to choose the circuit type. The other circuit types were in fact emulations but nobody could name exactly all of them (try a quick search on google to find the guesses), until now. Platinum Digital Studio VCA. Voice Processing – Compression Techniques. There are any number of different ways compressors can be applied. 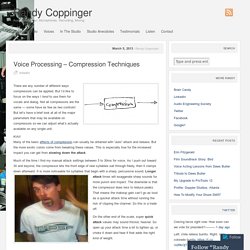 But I’d like to focus on the ways I tend to use them for vocals and dialog. Not all compressors are the same — some have as few as two controls! But let’s have a brief look at all of the major parameters that may be available on compressors so we can adjust what’s actually available on any single unit. KIAI! 11 Essential Logic Pro X Shortcuts for Producers. There are over 1000 key commands for Logic Pro X, both pre-assigned and unassigned. 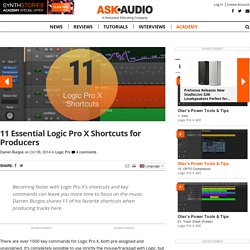 It’s completely possible to use strictly the mouse/trackpad with Logic, but key commands help you to realize your musical vision much faster. In this article I’ll be narrowing the focus on production in Logic, and show 10 of my favorite commands for this. Even if you’re more interested in recording, arranging, mixing, or editing… most of these commands will cross over to those areas too, so read on. #1 - Capture a MIDI Recording After it’s Played (Shift-R) When playing a virtual instrument along with your track, you might end up doing something great that you wish you’d have recorded. Noisia In The Studio With Future Music. 5 Minutes To A Better Mix: The Mute Button - TheRecordingRevolution.com. 5 Minutes To A Better Mix: Pre Vs. Post Fader Sends - TheRecordingRevolution.com. Mixing Orchestra Tips: Pre or Post Fader Send Reverb? I was inspired to write this article after discussing a situation with several composers who sought my advice on how to “put more distance between the listener and the direct sound of the samples”. 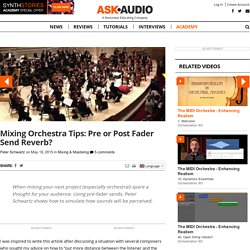 In other words, their end goal was to simulate what an orchestra sounds like from the perspective of an audience member seated in the middle row of a concert hall, as opposed to the front row or even closer to the source—the conductor or player’s positions. Episode 3: Mad Max String Theme - Studio Time with Junkie XL. Learn to Produce Drum and Bass in Live 9 by DJ Fracture - Part 3 of 3. Making the Beat: Drum N Bass Drums. Welcome to the fifth and final installment of the drum based tutorial series that will show you what the beats are and how to make them sound good. 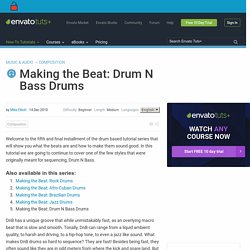 In this tutorial we are going to continue to cover one of the few styles that were originally meant for sequencing, Drum N Bass. DnB has a unique groove that while unmistakably fast, as an overlying macro beat that is slow and smooth. Tonally, DnB can range from a liquid ambient quality, to harsh and driving, to a hip-hop tone, to even a jazz like sound. What makes DnB drums so hard to sequence? They are fast! Keep in mind that this tutorial is not aiming for how to program all the extra drums and beats that usually come along with a lot of DnB beats. 6. Drum Pattern. 6. Drum Pattern Drum and Percussion sequencing.My preference for producing Drum and Bass and Breakbeat over House probably originates from my love of solid Drums and contemporary rhythmic variety. The following drum patterns have been seperated into 3 categories, Breakbeat, Hip Hop and Drum and Bass. PressReader.com - Connecting People Through News.

Reaktor 5 Tutorials - Introduction. How to Produce a Larger Than Life Drum Sound - Envato Tuts+ Music & Audio Tutorial. There aren't many of us who produce beat based music who don't crave a bigger, badder drum sound. Although producing monster drums is often the audio equivalent of slight of hand, getting the illusion right is essential if you want your new drum track to sit well in your mix. Let's run through a few techniques here for creating bigger drum sounds.

Drum Production Tips for EDM: Dubstep Snare. This month, iZotope visited Together Boston and presented workshops on drum production, mixing and mastering, and vocal editing! In this post, we’ll be exploring the drum production techniques we dove into at Together. EDM producers are on a continual quest to create powerful, impactful sounding drums. Many producers — from Pendulum to Noisia to Skrillex to BT to Morgan Page and many more — have developed their own signature sounds largely based on the way their drums are mixed.

Designing a single drum sound can be quite involved, making use of everything from filters to distortions to sub-bass tones to high frequencies. Layers are key to the sound design of an effective kick, snare or hi-hat. The Ultimate Guide to Drum Programming - EDMProd. It’s been a while since I wrote an “Ultimate Guide”, or mega-post. The last one, I believe, was on writing better and more memorable melodies which many of you found helpful. This time around, we’re looking at an area of music production that’s just as important—if not more important—than writing melodies: drum programming. Now, this post is particularly long (around 6,000 words). It’s not the kind of article you should skim over or read while you’re having a conversation with someone on Facebook.

Logic Audio Tape Saturation Trick (tube Compression) How to Effectively Layer Drum Sounds. How to Use Saturation Effectively. Saturation is an often misunderstood process, sometimes written off as basic distortion effect, too subtle for most uses. Converse Rubber Tracks Sample Library. Home - Parsons Audio. 72 Music Production Tips I Wish I Knew When I Started. Dear Past Zac, The year is 2015. I … well you, are older. Keeping Your Pro Tools Sessions On Track. Tips For Beginners. We continue our newcomer's guide to Pro Tools with a selection of techniques that every user should know.

Mike Thornton Our workshops bring you useful techniques every month, but there are some that are especially applicable if you want to get up and running in the most efficient way. Here's a quick roundup. Auto Backup Pro Tools saves your chosen number of automatic backups in the Session File Backups folder. Make sure you're using the Pro Tools Auto Backup feature, as one day soon it will save your bacon! Template Sessions.