Got Apple TV for Christmas, any cool tips anyone? : apple. Key Qualities for a School Makerspace. QR Codes in the Classroom. If you haven’t noticed, there has been an influx of strange black-and-white codes showing up all over the place. 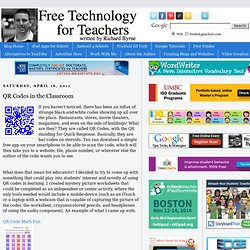 Restaurants, stores, movie theaters, magazines, and even on the side of buildings! What are they? They are called QR Codes, with the QR standing for Quick Response. Basically, they are bar codes on steroids. QR Codes Explained and Ideas for Classroom Use. When I lead workshops or give presentations I typically don't distribute handouts in paper form. 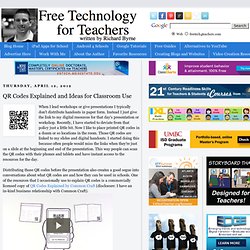 Instead I just give the link to my digital resources for that day's presentation or workshop. Recently, I have started to deviate from that policy just a little bit. Now I like to place printed QR codes in a dozen or so locations in the room. Those QR codes are linked to my slides and digital handouts. Cram. The Five Best Tools for Creating Videos Without Installing Software. Over the years I've published some lists and reviews of free tools for creating videos online. 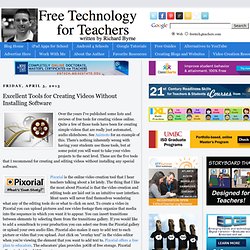 Quite a few of those tools have been for creating simple videos that are really just automated, audio slideshows. Read Write Think Makes It Easy to Create Crossword Puzzles. I've never been a big fan of crossword puzzles, but my grandmother who taught Language Arts for decades loved them. 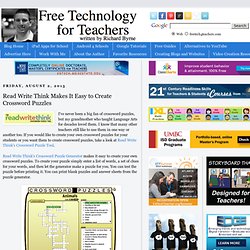 I know that many other teachers still like to use them in one way or another too. Two Online Forensic Science Games. Earlier this month David Andrade published a good collection of resources for teaching about forensic science. 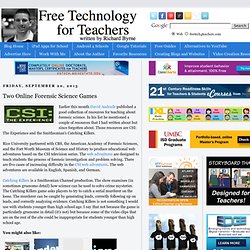 In his list he mentioned a couple of resources that I had written about but since forgotten about. Those resources are CSI: The Experience and the Smithsonian's Catching Killers. Rice University partnered with CBS, the American Academy of Forensic Sciences, and the Fort Worth Museum of Science and History to produce educational web adventures based on the CSI television series. 8 Classroom Apps To Try This Fall. How to Get Your School Ready for STEM This Year. Teaching Strategies Getty By Anne Jolly Are you ready for STEM this year? 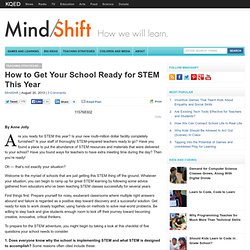 Is your new multi-million dollar facility completely furnished? Is your staff of thoroughly STEM-prepared teachers ready to go? 5 Ways Students Can Create Audio Slideshows. Somewhere between a PowerPoint presentation and a full-fledged video is the audio slideshow. 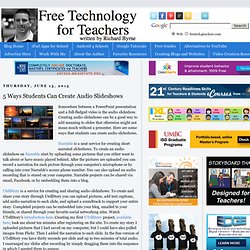 Creating audio slideshows can be a good way to add meaning to slides that otherwise might not mean much without a presenter. Here are some ways that students can create audio slideshows. Narrable is a neat service for creating short narrated slideshows. To create an audio slideshow on Narrable start by uploading some pictures that you either want to talk about or have music played behind. After the pictures are uploaded you can record a narration for each picture through your computer's microphone or by calling into your Narrable's access phone number. UtellStory is a service for creating and sharing audio slideshows. Three Ways to Make Useful QR Codes for Your Students.

This morning I did a very simple QR code activity at the Practical Ed Tech Summer Camp. 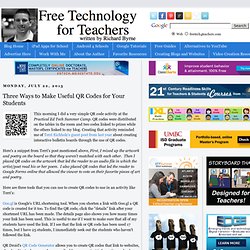 QR codes were distributed on the tables in the room and two codes linked to prizes while the others linked to my blog. Keith Hughes Explains How to Make Flipped Classroom Videos. New memoir shines harsh light on U.S. schools. After more than 30 years as a writer, editor and publishing executive, John Owens left a high-paying job as senior vice president and editorial director of Hachette Filipacchi Media to "give back" to the U.S. public schools he'd attended as a kid. 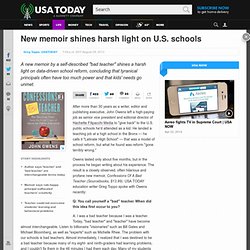 He landed a teaching job at a high school in the Bronx — he calls it "Latinate High School" — that was a model of school reform, but what he found was reform "gone terribly wrong. " Owens lasted only about five months, but in the process he began writing about his experience. The result is a closely observed, often hilarious and profane new memoir, Confessions Of A Bad Teacher (Sourcebooks, $13.99). USA TODAY education writer Greg Toppo spoke with Owens recently: Q: You call yourself a "bad" teacher.

321 Free Tools for Teachers - Free Educational Technology. TenMarks. Pixar Vets Unveil A Genre-Busting iPad Talk Show That Talks Back. There's a moment in every episode of Dora the Explorer and Blue's Clues when the character on screen asks the children watching at home to answer a question, followed by a silent pause. 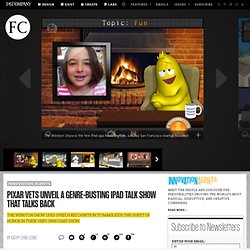 The child is supposed to respond, of course, but the adults know that the TV isn't really listening. But what if Dora was able to hear the child's answer, and respond? That’s the idea behind The Winston Show, the first iPad app from a buzzy San Francisco startup called ToyTalk that is founded by technical goliaths from Pixar Animation Studios. ToyTalk’s breakthrough is that the app's wise-cracking host Winston, and his tangerine-shaped sidekick Ellington, ask questions of their pint-sized viewers, listen to the answer, respond intelligently, and get smarter as more children play along. Take a Sneak Peek at Socrative 2.0. Create Choose Your Own Adventure Videos. Five Changes Every School Should Make. Video While You Work with MirrorCase for iPad — A Successful Kickstarter Project.

By Emily | May 28, 2013 | No comment yet Students or professionals who use the iPad to record video while note taking know that this variety of multitasking requires more than a little juggling on the part of the user. RHP Multimedia’s MirrorCase for iPad plans to solve this (decidedly first world) problem, and they’ve turned to Kickstarter to raise the necessary funds to produce this useful iPad accessory. MirrorCase lets you use the rear camera while the iPad is in the horizontal position, affording the notetaker a chance to record while he writes. While the MirrorCase has already bested its modest 5K goal by more than 50 percent, the funding period ends in less than two days! 25,000 Images of Art That You Can Re-use for Free. The U.S. National Gallery of Art hosts more than 25,000 images of famous and not-so-famous works of art.

Nearly all of the images can be downloaded and re-used for free. NGA Images also allows you to register and create online collections of images. The collections are called lightboxes. When you find an image in NGA Images click on the magnifying glass icon to enlarge it and learn more about it. 5 Sources of Free Sound Effects and Music. This morning Greg Kulowiec and I are teaching a workshop on creating content in iBooks Author. I'm starting the morning with a discussion about Copyright, Creative Commons, and Fair Use.

This collection of resources for locating music and sounds licensed for re-use is one that I am sharing with the group. The Free Music Archive provides free, high-quality, music in a wide range of genres. The content on Free Music Archive is used under various creative commons licenses. The New York State Music Fund provided initial funding for FMA. Sound Bible is a resource for finding and downloading free sound clips, sound effects, and sound bites. Royalty Free Music hosts music tracks that can be reused in numerous ways. Jamendo is a source of free and legal music downloads. Six Free Alternatives to PowerPoint and Keynote. Twice in the last week I've been asked for a list of free alternatives to either PowerPoint or Keynote.

I've written a couple of these lists over the last five years, but some of the alternatives I've shared in the past have either gone out of business or started charging a fee. Here's my updated list of free alternatives to PowerPoint and Keynote. Empressr is a fully functional, high quality, online slide show presentation creation and sharing service. Six Free Alternatives to PowerPoint and Keynote.

Applications for Education The games found on Try Engineering are appropriate for middle school and elementary school use. The Five Best Tools for Creating Videos Without Installing Software. Over the years I've published some lists and reviews of free tools for creating videos online. Quite a few of those tools have been for creating simple videos that are really just automated, audio slideshows. Forsyth Co Ga. BYOT tour info.