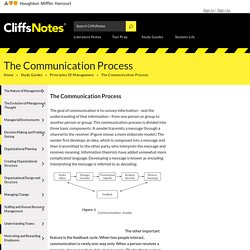 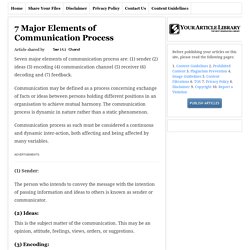 Communication may be defined as a process concerning exchange of facts or ideas between persons holding different positions in an organisation to achieve mutual harmony. The communication process is dynamic in nature rather than a static phenomenon. Communication process as such must be considered a continuous and dynamic inter-action, both affecting and being affected by many variables. Lexicology - Wikipedia. The term first appeared in the 1970s, though there were lexicologists in essence before the term was coined. 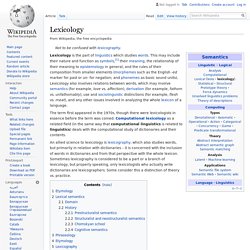 Computational lexicology as a related field (in the same way that computational linguistics is related to linguistics) deals with the computational study of dictionaries and their contents. An allied science to lexicology is lexicography, which also studies words, but primarily in relation with dictionaries – it is concerned with the inclusion of words in dictionaries and from that perspective with the whole lexicon. Sometimes lexicography is considered to be a part or a branch of lexicology, but properly speaking, only lexicologists who actually write dictionaries are lexicographers. Some consider this a distinction of theory vs. practice. Etymology[edit] Lexical semantics[edit] Domain[edit] Semantic relations between words are of many kinds, for example homonymy, antonymy, meronymy, and paronymy. Morphology (linguistics) The discipline that deals specifically with the sound changes occurring within morphemes is morphophonology. 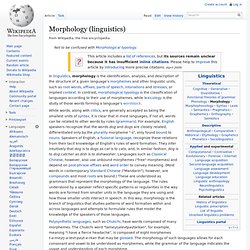 The history of morphological analysis dates back to the ancient Indian linguist Pāṇini, who formulated the 3,959 rules of Sanskrit morphology in the text Aṣṭādhyāyī by using a constituency grammar. The Greco-Roman grammatical tradition also engaged in morphological analysis. Studies in Arabic morphology, conducted by Marāḥ al-arwāḥ and Aḥmad b. ‘alī Mas‘ūd, date back to at least 1200 CE.[1] The term "morphology" was coined by August Schleicher in 1859.[2] Here are examples from other languages of the failure of a single phonological word to coincide with a single morphological word form. Proto-Indo-European language - Wikipedia.

Proto-Indo-European (PIE)[1] is the linguistic reconstruction of the hypothetical common ancestor of the Indo-European languages, the most widely spoken language family in the world. 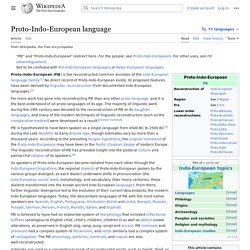 PIE is estimated to have been spoken as a single language from 4500 BC to 2500 BC[2] during the Late Neolithic to Early Bronze Age, though estimates vary by more than a thousand years. Proto-Indo-European root. Cause - definition of cause in English. Matter. C.1200, materie, "subject of thought, speech, or expression," from Anglo-French matere, Old French matere "subject, theme, topic; substance, content, material; character, education" (12c., Modern French matière), from Latin materia "substance from which something is made," also "hard inner wood of a tree" (cf. 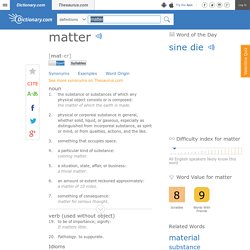 Portuguese madeira "wood"), from mater "origin, source, mother" (see mother (n.1)). Or, on another theory, it represents *dmateria, from PIE root *dem-/*dom- (cf. Latin domus "house," English timber). With sense development in Latin influenced by Greek hyle, of which it was the equivalent in philosophy. Matter - definition of matter in English. Noun 1[mass noun] Physical substance in general, as distinct from mind and spirit; (in physics) that which occupies space and possesses rest mass, especially as distinct from energy: ‘the structure and properties of matter’ ‘This is the amount of heat energy necessary to change the phase or state of matter from liquid to gas.’ 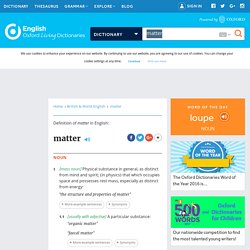 ‘Their properties are determined locally by the changing patterns of matter and energy residing within them.’ ‘Thus dark energy is intrinsically relativistic and is more like energy than matter.’ ‘When ionizing radiations pass through matter, energy is deposited in the material concerned.’ ‘With their knowledge, the spaceships could become mass, matter, energy or any form of radiation.’

Verb [NO OBJECT]1[usually with negative or in questions] Be important or significant: ‘it doesn't matter what the guests wear’ ‘what did it matter to them?’ Phrases Origin Pronunciation.