9/11 Video Timeline: How The Day Unfolded. Remembering September 11 With an Oral History Project. On the morning of September 11, 2001, I was on my way to work in Springfield, Illinois. 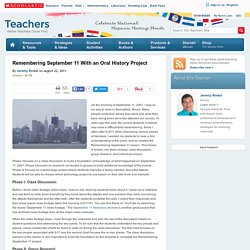 Many people remember where they were and what they were doing when terrorists attacked our country 10 years ago this year. My current students, however, may have a difficult time remembering. Since I often refer to 9/11 when discussing various pieces of literature, I wanted my students to have a firm understanding of the event, and so created the Remembering September 11 lesson. This lesson is broken into three phases: class discussion, group research, and individual project.

Phase I focuses on a class discussion to build a foundation of knowledge of what happened on September 11, 2001. Phase I: Class Discussion Before I show video footage of the event, I want to see what my students know about it. While the video footage plays, I look through the notecards and plan the rest of the discussion based on student questions and addressing the key points.

Phase II: Group Research. Britannica Library. National September 11 Memorial & Museum. We invite you to add your voice to our Reflecting on 9/11 exhibition at the recording booth inside the museum. 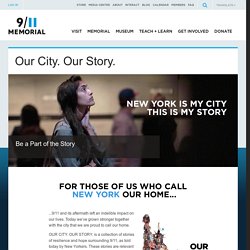 Your visit helps to support the nonprofit institution. Your story will help preserve this important history. Powered by Cincopa <a href=' Hosting</a> for Business solution. <span>Reflecting on 9/11</span><span>Reflecting on 9/11 is an ongoing media installation in the Museum that allows visitors to add their voice regarding topics surrounding 9/11. </span><span>Lee V. Learn about other ways you can share your story. Stony Brook WTC Wellness Program. Today’s Front Pages. September 11, 2001 : Attack on America. September 11, 2001 : Attack on America Remarks by the President After Two Planes Crash Into World Trade Center 9:30 A.M. 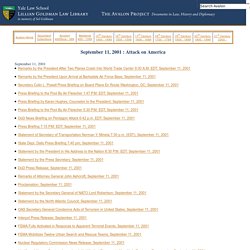 James B. Home · September 11 Digital Archive. Poetry of September 11: Library of Congress Bibliographies, Research Guides, and Finding Aids (Virtual Programs & Services, Library of Congress) About this Collection - September 11, 2001, Documentary Project. The September 11, 2001 Documentary Project captures the reactions, eyewitness accounts, and diverse opinions of Americans and others in the months that followed the terrorist attacks on the World Trade Center, the Pentagon, and United Airlines Flight 93. 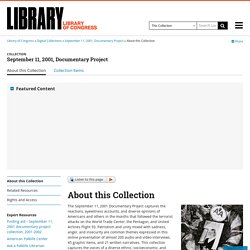 Patriotism and unity mixed with sadness, anger, and insecurity are common themes expressed in this online presentation of almost 200 audio and video interviews, 45 graphic items, and 21 written narratives. This collection captures the voices of a diverse ethnic, socioeconomic, and political cross-section of America during trying times and serves as a historical and cultural resource for future generations. The voices of men and women from many cultural, occupational, and ethnic backgrounds are represented. More than 60 years ago, the American Folklife Center mounted a similar effort to document national sentiment in 1941 following the attack on Pearl Harbor.