Turkey Travel Information and Travel Guide. A richly historical land with some of the best cuisine you will ever taste, one of the world’s greatest cities and scenery from white-sand beaches to soaring mountains. 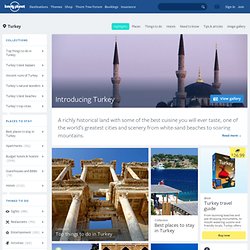 An Epic History When you set foot in Türkiye (Turkey), you are following in the wake of some remarkable historical figures. Ottoman sultans used to luxuriate in İstanbul’s Topkapı Palace, surrounded by fawning courtiers, harem members, eunuchs and riches from an empire stretching from Budapest to Baghdad. Centuries earlier, Byzantine Christians cut cave churches into Cappadocia’s fairy chimneys and hid from Islamic armies in underground cities. At other points over the millennia, the Hittites built Hattuşa’s stone walls on the Anatolian steppe, Romans coursed down the Curetes Way at Ephesus (Efes), whirling dervishes gyrated with Sufi mysticism, and the mysterious Lycians left ruins on Mediterranean beaches.

Cultural Depth Of course, Turkey’s current inhabitants are just as memorable. Ready to go? Read more. The most attractive tourist places in Turkey make tourists satisfied. Arts and Handicrafts of Turkey, Turkish culture. Arts in Turkey Islamic Art varies substantially from Western Art due primarily to restrictions in the Koran on depicting the human form. 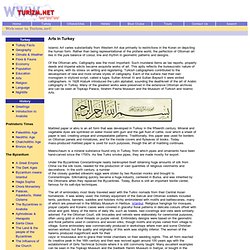 Rather than being representational of the profane world, the perfection of Ottoman art lies in the pure balance of colour, line and rhythm in geometric patterns and designs. Of the Ottoman arts, Calligraphy was the most important. Such mundane items as tax reports, property deeds and imperial edicts became exquisite works of art. This aptly reflects the bureaucratic nature of the empire, with its stress on writing and registering. Turkey national football team. The Turkey national football team (Turkish: Türkiye Millî Futbol Takımı) represents Turkey in association football and is controlled by the Turkish Football Federation, the governing body for football in Turkey. They are affiliated with UEFA. Turkey has qualified three times for the World Cup finals, in 1950, 1954, and 2002, although they withdrew from the 1950 event. Turkey has also qualified three times for the UEFA European Championship, in 1996, 2000 and 2008.

They have reached the semi-finals of three major tournaments: the 2002 World Cup, the 2003 Confederations Cup, and Euro 2008. History[edit] The Turkish national team played their first ever match against Romania in 1923 drawing 2–2.[2] Turkey played their first ever official match at the 1924 Summer Olympics losing 5-2 to Czechoslovakia. Turkey rounds up academics who signed petition denouncing attacks on Kurds. Turkey has been accused of violating academic freedom by rounding up university teachers who signed a petition denouncing military operations against Kurds in the south-east of the country. 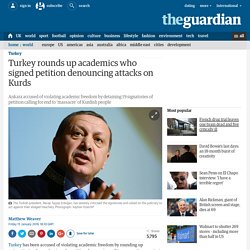 Police detained 19 academics over alleged “terror propaganda” after they signed a petition together with more than 1,400 others calling for an end to Turkey’s “deliberate massacre and deportation of Kurdish people”. The US ambassador to Turkey condemned the crackdown as “chilling”. Fifteen of the group were later released. Turkey releases almost 34,000 prisoners 'to make space for more coup plotters'

Almost 34,000 inmates have been released from prisons in Turkey in a suspected move to free up space for thousands of people detained over a failed coup. 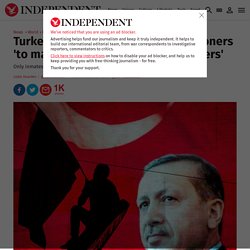 The move appeared to be part of measures announced last month to allow the release of inmates unrelated to the attempt to oust President Recep Tayyip Erdogan. Those who had served half their sentence were eligible, with crimes such as murder and rape excluded from the scheme. Analysts suspect the mass release is a move to make room in Turkey’s overcrowded jails to allow the imprisonment of more alleged coup plotters. Bekir Bozdag, the justice minister, said 33,838 prisoners convicted before 1 July who had demonstrated “good behaviour” were released on Thursday evening. Play Video Close This is a modal window. Greek anger at Turkey border treaty remarks. Image copyright Getty Images Greece has reacted angrily after Turkish President Recep Tayyip Erdogan appeared to question a treaty that set borders between the two countries. 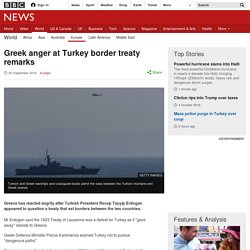 Mr Erdogan said the 1923 Treaty of Lausanne was a defeat for Turkey as it "gave away" islands to Greece. Greek Defence Minister Panos Kammenos warned Turkey not to pursue "dangerous paths". Bulgaria to Raise 100 Km Fence Across Borders With Greece and Turkey. 10 11Google +0 0 0 21 Bulgaria is to build a 100 km barbed wire fence along its border with Greece and Turkey and deploy thousands of border guards to prevent migrant flows. 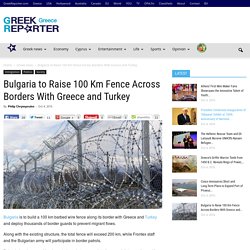 Along with the existing structure, the total fence will exceed 200 km, while Frontex staff and the Bulgarian army will participate in border patrols. Bulgaria has increased border patrols and at some points there are joint operations with Greek border guards. Even though migrant flows from Turkey have decreased significantly, Bulgaria is preparing for the possibility that the European Union-Turkey agreement on refugee flow might collapse. In a press conference in Sofia, Bulgarian Interior Minister Rumiana Bachvarova announced that the border guard forces will receive 420 modern jeeps, helicopters, thermal cameras and a special communication system for mobile phone reception. Turkey purges 13,000 police officers over failed coup. Image copyright Reuters Turkey has suspended almost 13,000 police officers for their alleged links with the US-based Muslim cleric, Fethullah Gulen. 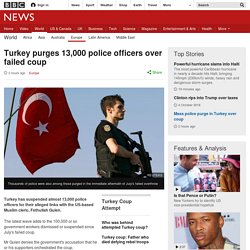 The latest wave adds to the 100,000 or so government workers dismissed or suspended since July's failed coup. Mr Gulen denies the government's accusation that he or his supporters orchestrated the coup. The government in turn rejects claims it is using the coup as an excuse to get rid of its opponents. It insists those without proven links to the coup will be freed. Turkey post-coup purges convulse society More than 2,500 officers whose suspensions were announced on Tuesday were police chiefs, said Turkish national police in a statement.

Turkey post-coup purges convulse society. They are just visible on the white stone entrance: the outlines of letters that once spelled out "Fatih University", removed after the attempted coup. 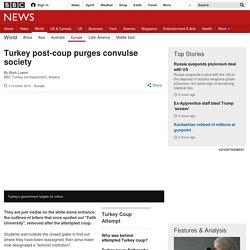 Students wait outside the closed gates to find out where they have been reassigned, their alma mater now designated a "terrorist institution". Turkey: Independent monitors must be allowed to access detainees amid torture allegations. Amnesty International has gathered credible evidence that detainees in Turkey are being subjected to beatings and torture, including rape, in official and unofficial detention centres in the country. 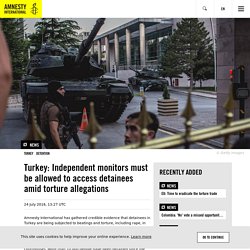 The organization is calling for independent monitors to be given immediate access to detainees in all facilities in the wake of the coup attempt, which include police headquarters, sports centres and courthouses. More than 10,000 people have been detained since the failed coup. Amnesty International has credible reports that Turkish police in Ankara and Istanbul are holding detainees in stress positions for up to 48 hours, denying them food, water and medical treatment, and verbally abusing and threatening them. From ISIS to the Kurds to Erdogan: Why Turkey Is in Serious Trouble. I am usually an optimist when it comes to Turkey’s future. 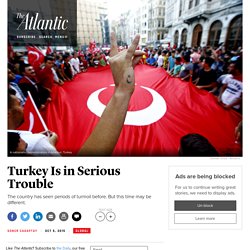 Indeed, I wrote a whole book about The Rise of Turkey. But these days, I’m worried. The country faces a toxic combination of political polarization, government instability, economic slowdown, and threats of violence—from both inside and outside Turkey—that could soon add up to a catastrophe. The likelihood of that outcome is increasing amid Russia’s bombing raids in Syria in support of its ally, Syrian President Bashar al-Assad, which threaten to debilitate the moderate rebels and boost the extremists in Syria’s civil war, while leaving Turkey to deal with two unruly neighbors: Assad and ISIS. Of course, Turkey has gone through periods of political and economic crisis before. But the analyst in me says that things look different this time. For one thing, Turkey’s Kurdish problem has changed.