How to stop Windows 10 from using your PC's bandwidth to update strangers' systems. One of the more intriguing changes in Windows holds the potential to save you a ton of wasted download bandwidth: Its new peer-to-peer (P2P) delivery update mechanism. 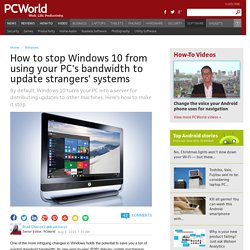 Using the P2P option, you could download a Windows update once, then use that machine to spread the update to all the PCs on your local network. Yay efficiency! Unfortunately, the settings for the new P2P option default to sharing with other computers over the Internet, not just ones on your network, and Reddit users have been fretting over a potential nasty side effect: Windows 10’s P2P sharing eating into your upload bandwidth and slowing down your network connection. We haven’t done enough testing to determine how Windows 10 handles its P2P uploads—and using a P2P cloud circumvents the issue of central Microsoft servers becoming overloaded—but the feature's easy to tweak or outright disable if you’d like. Here’s how. First, open the Start Menu and select Settings, then click Updates & Security. How To Uninstall, Disable, and Remove Windows Defender. Also, How Turn it Off.

If you’re already running a full anti-malware suite, you might not even realize that Windows Defender is already installed with Windows, and is probably wasting precious resources. 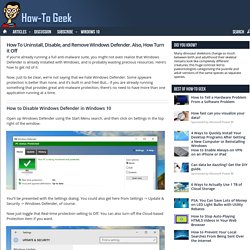 Here’s how to get rid of it. Now, just to be clear, we’re not saying that we hate Windows Defender. Some spyware protection is better than none, and it’s built in and free! But… if you are already running something that provides great anti-malware protection, there’s no need to have more than one application running at a time. How to Disable Windows Defender in Windows 10 Open up Windows Defender using the Start Menu search, and then click on Settings in the top right of the window. You’ll be presented with the Settings dialog. Now just toggle that Real-time protection setting to Off. 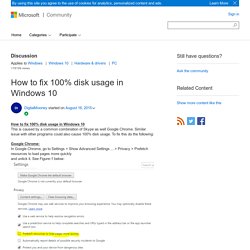 Similar issue with other programs could also cause 100% disk usage. To fix this do the following: Google Chrome: In Google Chrome, go to Settings > Show Advanced Settings ... > Privacy > Prefetch resources to load pages more quickly and untick it. Figure-1. How to stop Windows 10 from using your PC's bandwidth to update strangers' systems.

Rooting the Boostmobile zte warp 4g lte model N9510. LinkedIn Developer Network. The $22 marketing coach. How To Do SEO in 2015? Website. Content. Share. Don't Let YouTube Own Your Audience 07/02/2014. It’s no secret that many marketers and content creators rely on YouTube for their online video strategies, and superficially it makes sense: it’s free, it’s relatively easy, consumer awareness of the platform is high, and it has huge reach. 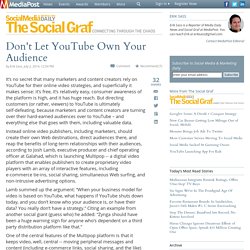 But directing customers (or rather, viewers) to YouTube is ultimately self-defeating, because marketers and content creators are turning over their hard-earned audiences over to YouTube – and everything else that goes with them, including valuable data. Lamb summed up the argument: “When your business model for video is based on YouTube, what happens if YouTube shuts down today, and you don’t know who your audience is, or have their data? You really don’t have a strategy.” Citing an example from another social giant (guess who) he added: “Zynga should have been a huge warning sign for anyone who’s dependent on a third party distribution platform like that.” Multipop - Sign In. Multipop's Official Ad Campaign! — Multipop – Interactive Video Platform. Monetize Video in Minutes. 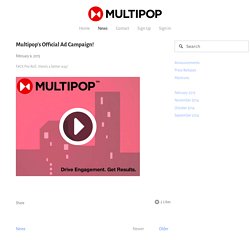 Monetize video in minutes with the Multipop interactive video platform. Add merchandise, advertising, commentary and voting, all without disrupting the show. Multipop New York | 174 Hudson St, New York, NY, 10013, United States. How to Archive Posts Without Deleting Them in WordPress. Have you ever wanted to hide older posts from your blog without deleting them? 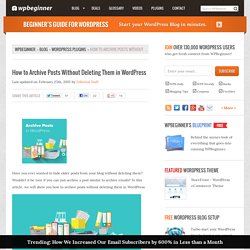 Wouldn’t it be nice if you can just archive a post similar to archive emails? In this article, we will show you how to archive posts without deleting them in WordPress. First thing you need to do is install and activate the Archived Post Status plugin. It works out of the box, and there are no settings for you to configure. Upon activation, the plugin adds a custom post status called ‘Archived’ to your posts, pages, and custom post types. Once you select the archive post statys, click on the update button to update your post. Your post will be marked as archived, and it will stop appearing on the front-end of your site. What if you wanted to quickly archive multiple posts at once? Next, from the bulk actions drop down menu select Edit and click the apply button. That’s all. Progress...