Official SAT® Practice. Talent Search. <div class="noscript-warning"><p><i class="icon-warning-sign"></i> To log in and use all the features of Khan Academy, please enable JavaScript in your browser. 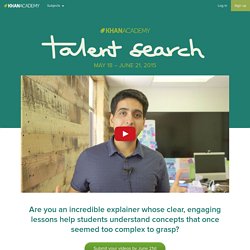 </p></div> Are you an incredible explainer whose clear, engaging lessons help students understand concepts that once seemed too complex to grasp? Submit your videos by June 21st You might be in a classroom, inspiring dozens of students each year. You might be at a kitchen table, kindly tutoring your younger siblings. Whoever you are, wherever you are, we want to amplify your voice so that you can reach millions of students around the world. Spread the word: Facebook Twitter Email Winners will be featured on the Khan Academy website and flown to California to meet, learn from, and work with the Khan Academy and YouTube teams. Learn more Who? We're seeking submissions from anyone and everyone with a passion for learning and a knack for making challenging concepts seem simple. 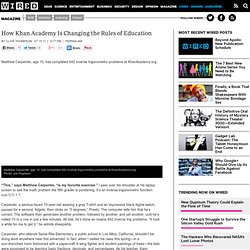 I peer over his shoulder at his laptop screen to see the math problem the fifth grader is pondering. It’s an inverse trigonometric function: cos-1(1) = ? Carpenter, a serious-faced 10-year-old wearing a gray T-shirt and an impressive black digital watch, pauses for a second, fidgets, then clicks on “0 degrees.” Presto: The computer tells him that he’s correct. Carpenter, who attends Santa Rita Elementary, a public school in Los Altos, California, shouldn’t be doing work anywhere near this advanced. But last November, Thordarson began using Khan Academy in her class. Initially, Thordarson thought Khan Academy would merely be a helpful supplement to her normal instruction. “I’m able to give specific, pinpointed help when needed,” she says. The result is that Thordarson’s students move at their own pace. Smarthistory: a multimedia web-book about art and art history.