School of Sociology, Politics and International Studies. MOOCs - All courses. Open Online Courses - Study Anywhere. Penn Open Learning – World-class online education. Public Privacy Course. Course Description “For the internet to remain global and open, it is imperative that countries, including those currently lacking capacity to adequately deal with security concerns, to adopt a growth- and freedom-oriented, participative, bottom-up perspective on security that has human rights at its core.” 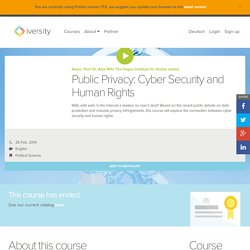 (Joint Governmental Statement at UN Human Rights Council in June 2013) Constitutional Law by Coursera. Course Description This course is designed to introduce you to one of the most important texts in human history-the United States Constitution. 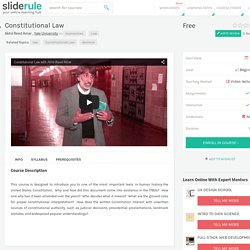 Why and how did this document come into existence in the 1780s? How and why has it been amended over the years? Who decides what it means? What are the ground rules for proper constitutional interpretation? This course will run from January 27 through early May (we are likely to provide you time after the release of the final lectures [April 21 - 25] to complete your final writing assignment). Weeks 1 - 6 will cover material from the book America's Constitution: A Biography. Each writing assignment will have 3 options; you should choose one option to submit. Week 1 Monday, January 27: "In The Beginning" video lectures released Wednesday, January 29: "In The Beginning" bonus content released Wednesday, January 29: "New Rules for a New World" video lectures released Friday, January 31: "New Rules for a New World" bonus content released Week 2 Week 3. English Common Law: Structure and Principles by Coursera.

Course Description The Common Law of England and Wales is one of the major global legal traditions. 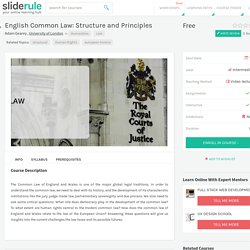 In order to understand the common law, we need to deal with its history, and the development of its characteristic institutions like the jury, judge made law, parliamentary sovereignty and due process. We also need to ask some critical questions. Constitutional Struggles in the Muslim World by Coursera. Course Description Since 2009 there has been a renewed wave of popular unrest sweeping throughout much of the Muslim world. 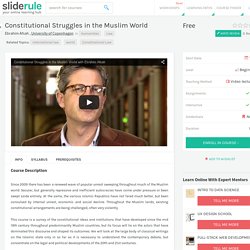 Secular, but generally repressive and inefficient autocracies have come under pressure or been swept aside entirely. The Law of the European Union: An Introduction - Universiteit Leiden. About the Course In 2012, the EU received the Nobel Peace Prize for its decades-long contribution to the advancement of peace and reconciliation, democracy and human rights in Europe. 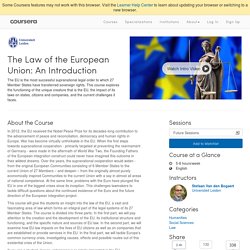 War has become virtually unthinkable in the EU. When the first steps towards supranational cooperation - primarily targeted at preventing the rearmament of Germany - were made in the aftermath of World War Two, the Founding Fathers of the European integration construct could never have imagined this outcome in their wildest dreams. Over the years, the supranational cooperation would widen - from the original European Communities consisting of 6 Member States to the current Union of 27 Members – and deepen – from the originally almost purely economically inspired Communities to the current Union with a say in almost all areas of national competence.

At the same time, problems with the Euro have plunged the EU in one of the biggest crises since its inception. 1. 2. No. 3. 4. 5. International Human Rights Law: Prospects and Challenges - Duke University. About the Course This course analyzes the international and domestic laws and institutions that protect the fundamental rights of all human beings. 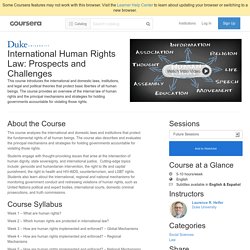 The course also describes and evaluates the principal mechanisms and strategies for holding governments accountable for violating those rights. Students engage with thought-provoking issues that arise at the intersection of human dignity, state sovereignty, and international justice. Cutting-edge topics include: genocide and humanitarian intervention, the right to life and capital punishment, the right to health and HIV-AIDS, counterterrorism, and LGBT rights. Students also learn about the international, regional and national mechanisms for monitoring government conduct and redressing violations of human rights, such as United Nations political and expert bodies, international courts, domestic criminal prosecutions, and truth commissions.

Course Syllabus Week 1 – What are human rights? Week 3 – How are human rights implemented and enforced? Q. Penn Open Learning – World-class online education. Revolutionary Ideas: An Introduction to Legal and Political Philosophy. About the Course What is the purpose of government? 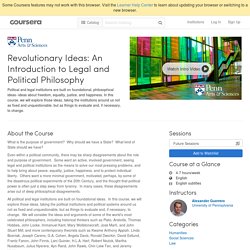 Why should we have a State? What kind of State should we have? Even within a political community, there may be sharp disagreements about the role and purpose of government. Some want an active, involved government, seeing legal and political institutions as the means to solve our most pressing problems, and to help bring about peace, equality, justice, happiness, and to protect individual liberty. All political and legal institutions are built on foundational ideas. LearnSocial - Instructor led and Online Courses from top experts. 8 Online Courses to Build Your Intellect. Intellectual character is formed from a set of attributes that distinguish an individual as capable of clear, effective thought. 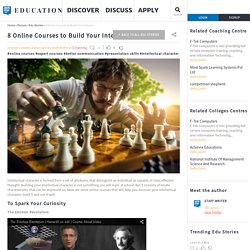 Building your intellectual character is not something you will learn at school. But it consists of innate characteristics that can be improved on. Here are some online courses that will help you discover your intellectual character, build it and use it well. To Spark Your Curiosity. University for Peace Distance Education. Peace Journalism 2 credits / 6 weeks weeks20 Apr 2015 - 29 May 2015 Professor Julia Hoffmann The destructive role that media can play has been amply demonstrated during conflicts in Nazi Germany to that in Rwanda in the 1990s. 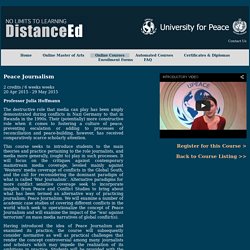 Their (potentially) more constructive role when it comes to fostering a culture of peace, preventing escalation or adding to processes of reconciliation and peace-building, however, has received comparatively scarce scholarly attention.