History and Politics, Mahatma Gandhi. Mahatma Gandhi (First of 5 pages) Vinay Lal Mohandas Karamchand Gandhi was born in the town of Porbander in the state of what is now Gujarat on 2 October 1869. 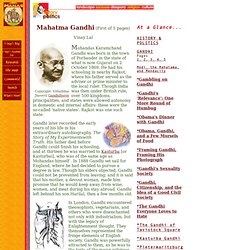 He had his schooling in nearby Rajkot, where his father served as the adviser or prime minister to the local ruler. Though India was then under British rule, over 500 kingdoms, principalities, and states were allowed autonomy in domestic and internal affairs: these were the so-called 'native states'. Rajkot was one such state. Gandhi later recorded the early years of his life in his extraordinary autobiography, The Story of My Experimentswith Truth. Gandhi (film)

Gandhi is a 1982 epic biographical film which dramatises the life of Mohandas Karamchand Gandhi, the leader of India's non-violent, non-cooperative independence movement against the United Kingdom's rule of the country during the 20th century. 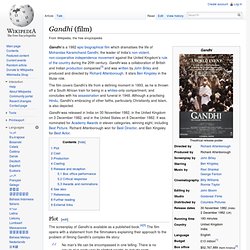 Gandhi was a collaboration of British and Indian production companies[3] and was written by John Briley and produced and directed by Richard Attenborough. It stars Ben Kingsley in the titular role. The film covers Gandhi's life from a defining moment in 1893, as he is thrown off a South African train for being in a whites-only compartment, and concludes with his assassination and funeral in 1948. Although a practising Hindu, Gandhi's embracing of other faiths, particularly Christianity and Islam, is also depicted. Gandhi was released in India on 30 November 1982, in the United Kingdom on 3 December 1982, and in the United States on 6 December 1982.

The early life of Gandhi is not depicted in the film. 55th Academy Awards. Mahatma Gandhi Biography. Early Life Indian nationalist leader Mohandas Karamchand Gandhi, more commonly known as Mahatma Gandhi, was born on October 2, 1869, in Porbandar, Kathiawar, India, which was then part of the British Empire. 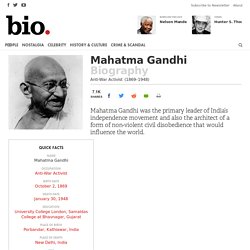 His father, Karamchand Gandhi, served as a chief minister in Porbandar and other states in western India. His mother, Putlibai, was a deeply religious woman who fasted regularly. Gandhi grew up worshiping the Hindu god Vishnu and following Jainism, a morally rigorous ancient Indian religion that espoused non-violence, fasting, meditation and vegetarianism.

Young Gandhi was a shy, unremarkable student who was so timid that he slept with the lights on even as a teenager. In 1885, Gandhi endured the passing of his father and shortly after that the death of his young baby. Upon returning to India in 1891, Gandhi learned that his mother had died just weeks earlier. Spiritual and Political Leader Gandhi formed the Natal Indian Congress in 1894 to fight discrimination. The Salt March. Philosopy. Hindu History. Mahatma Gandhi. Desde 1918 perteneció abiertamente al frente del movimiento nacionalista indio. 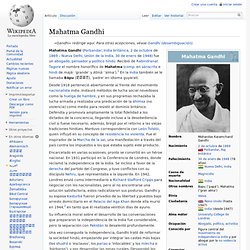 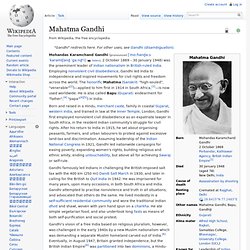 Employing nonviolent civil disobedience, Gandhi led India to independence and inspired movements for civil rights and freedom across the world. The honorific Mahatma (Sanskrit: "high-souled", "venerable"[2])—applied to him first in 1914 in South Africa,[3]—is now used worldwide. He is also called Bapu (Gujarati: endearment for "father",[4] "papa"[4][5]) in India. Gandhi famously led Indians in challenging the British-imposed salt tax with the 400 km (250 mi) Dandi Salt March in 1930, and later in calling for the British to Quit India in 1942. Gandhi is commonly, though not officially,[10] considered the Father of the Nation[11] in India. Early life and background.