Consumer. Want to Resell Your Clothes Online? Here's Which Brands Sell Best (and Worst) Q&A: musicMagpie's Eren Ozagir on the growth of 'recommerce' Eren Ozagir is chief marketing and commercial officer at musicMagpie, a site which buys tech, fashion, entertainment items, and electronics. 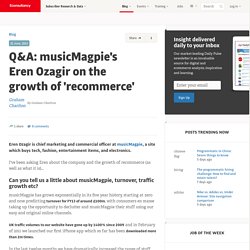 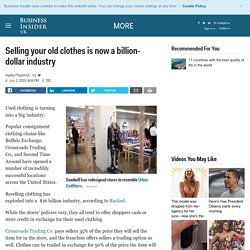 Goodwill Used clothing is turning into a big industry. Popular consignment clothing chains like Buffalo Exchange, Crossroads Trading Co., and Second Time Around have opened a number of incredibly successful locations across the United States. Reselling clothing has exploded into a $16 billion industry, according to Racked. While the stores' policies vary, they all tend to offer shoppers cash or store credit in exchange for their used clothing. Crossroads Trading Co. pays sellers 35% of the price they will sell the item for in the store, and the franchise offers sellers a trading option as well. Second Time Around offers sellers 40% of the final selling price of each item, with different rates for luxury apparel. The stores say many customers believe their clothing is worth more than it is. Want to Resell Your Clothes Online? Here's Which Brands Sell Best (and Worst) What is Recommerce? - Definition from Techopedia.

Recommerce - RECOMMERCE SOLUTIONS. Recommerce Solutions’ business plan was created after a encounter between a re-use expert and an e-commerce expert in 2007. 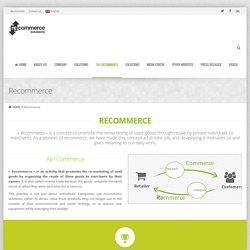 Their conviction that products processed through the re-use channels could acquire commercial value, in particular by using web tools, continued to grow and resulted in the creation of the company in 2009. What the heck is “recommerce”? S October 2011 Trend Briefing covering the consumer trend "RECOMMERCE" English not your preferred language? 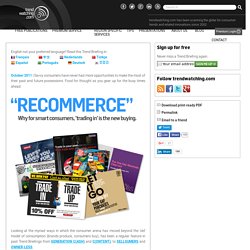 Why Facebook’s new Marketplace is a nightmare for eBay and Etsy [Video] On Monday, Facebook (FB) announced that it would revive Facebook Marketplace. 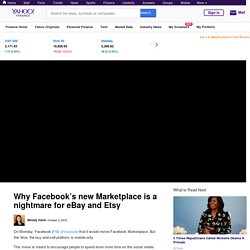 But this time, the buy-and-sell platform is mobile-only. Facebook Marketplace: Is this the new eBay? Facebook is launching Marketplace, its version of the local rummage sale, and it's trying to coax its 1.71 billion users to hunt for new treasures or declutter their closets. 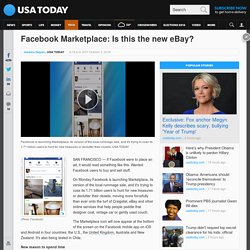 USA TODAY SAN FRANCISCO — If Facebook were to place an ad, it would read something like this. Wanted: Facebook users to buy and sell stuff. On Monday Facebook is launching Marketplace, its version of the local rummage sale, and it's trying to coax its 1.71 billion users to hunt for new treasures or declutter their closets, moving more forcefully than ever onto the turf of Craigslist, eBay and other online services that help people peddle that designer coat, vintage car or gently used couch.

The Marketplace icon will now appear at the bottom of the screen on the Facebook mobile app on iOS and Android in four countries: the U.S., the Australia and New Zealand. New reason to spend time Down the line, Facebook may invite businesses to join Marketplace, too, says Marketplace product manager Bowen Pan. How Marketplace works. How Facebook Can Marketplace Impact eBay. 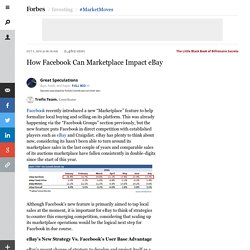 This was already happening via the “Facebook Groups” section previously, but the new feature puts Facebook in direct competition with established players such as eBay and Craigslist. eBay has plenty to think about now, considering its hasn’t been able to turn around its marketplace sales in the last couple of years and comparable sales of its auctions marketplace have fallen consistently in double-digits since the start of this year. Although Facebook’s new feature is primarily aimed to tap local sales at the moment, it is important for eBay to think of strategies to counter this emerging competition, considering that scaling up its marketplace operations would be the logical next step for Facebook in due course. eBay’s New Strategy Vs. 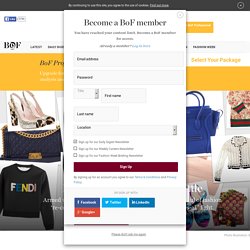 Despite a more challenging venture capital market for e-commerce start-ups, this was not a down round, meaning the company's valuation rose, said a spokesperson for Tradesy. The terms of the transaction were not disclosed, but Tradesy has quadrupled revenue since January 2015, when it raised a $30 million Series B round led by Kleiner Perkins Caufield & Byers, which valued the company at about $100 million.

But shipping and handling items like this is expensive. Related Articles: The Rise and Fall (and Rise and Fall) of eBay. How Facebook Can Marketplace Impact eBay. Uk.businessinsider. Alexandra Marquez makes $5,000 a month selling clothing and accessories on Poshmark. 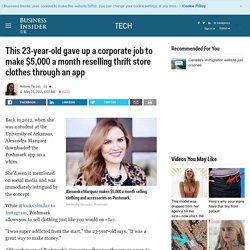 Alexandra Marquez / Poshmark Back in 2012, when she was a student at the University of Arkansas, Alexandra Marquez downloaded the Poshmark app on a whim. Why the Reselling Industry Is on the Rise - The Mogul MomThe Mogul Mom. Posted on October 3, 2016 at 11:17 am by Tiffany Rowe / Business, Reselling & Wholesaling / 0 In the spirit of full disclosure: This post may contain affiliate links. 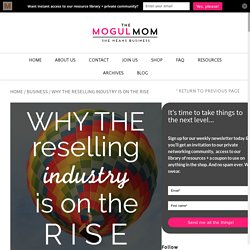 This means I may earn a commission (at no extra cost to you) if you purchase something using one of my links. This helps cover the expense of running the site while keeping the content 100% free. Note that I only recommend products I believe in.