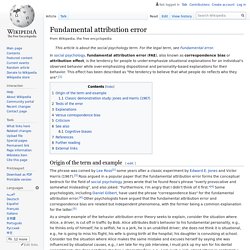 It does not explain interpretations of one's own behavior, where situational factors are more easily recognized and can thus be taken into consideration. Conversely, from the other perspective, this error is known as the actor–observer bias, in which people tend to overemphasize the role of a situation in their behaviors and underemphasize the role of their own personalities. Examples[edit] Alice, a driver, is about to pass through an intersection. Her light turns green, and she begins to accelerate, but another car drives through the red light, crossing in front of her. Details[edit] Classic demonstration study: Jones and Harris (1967)[edit] Explanations[edit] Managers Need to Make Time for Face Time. Alan Buckelew, chief operations officer of Carnival Corp., moved to Shanghai last September so he could help the world’s biggest cruise-ship company expand in China. 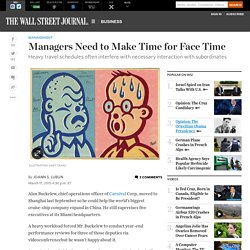 He still supervises five executives at its Miami headquarters. A heavy workload forced Mr. Buckelew to conduct year-end performance reviews for three of those deputies via videoconferencebut he wasn’t happy about it. “A review is probably the one time when you want to be physically present,” Mr. Buckelew says. As businesses expect more senior leaders to both manage more far-flung teams and spend more time with distant clients, face time has become a precious commodity—and a source of professional agita. When it comes down to it, there is still no good substitute for being in the same room with a direct report or a high-level boss, many executives say. Hands-off leadership carries career risks. “Unless you are in the field with your people, it’s difficult for you to manage it,” he adds. Mr. Daniel Goleman on the danger of communicating by email. Online Social Skills Guide - Improve Your Social Skills.

5 Strategies to Read People’s Emotional Energy. Emotions are a stunning expression of our energy, the “vibe” we give off. 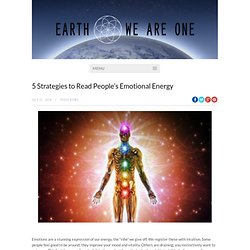 We register these with intuition. Some people feel good to be around; they improve your mood and vitality. Others are draining; you instinctively want to get away. This “subtle energy” can be felt inches or feet from the body, though it‘s invisible. Indigenous cultures honour this energy as life force. Emotional energy is contagious. When reading emotions, realize that what others say or how they appear frequently don‘t match their energy. Here, the surrender to focus on is saying “yes” to the messages your body sends. Strategies to read emotional energy Sense people’s presence - This is the overall energy we emit, not necessarily congruent with words or behaviour. As you read people notice: does their overall energy feel warm? Watch people’s eyes – We can make love or hate with our eyes. Take time to observe people‘s eyes. Reading energy is a game-changer where intense emotions blur your clarity. Neural Mechanisms of Reading Facial Emotions in Young and Older Adults.

Emotion Expression - Emotion Faces and Facial Analysis. Neither emotion nor its expression are concepts universally embraced by psychologists. 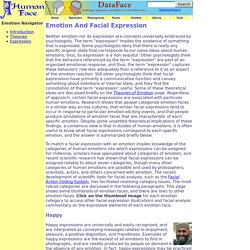 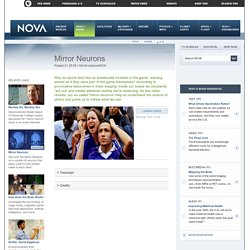 Gaze into a mirror, and what do you see? Well, I see my face, of course. But in my face I see moods, I see shifts of feeling. We humans are really good at reading faces and bodies. Ask yourself, "Why do people get so involved, so deeply, deeply involved, with such anguish, such pain, such nail biting tension over football? " COMMENTATOR: The Cleveland Browns are gambling on defense. ROBERT KRULWICH: Why are we such suckers for sports? Well, as it happens, scientists have an explanation for this strange ability to connect. DANIEL GLASER: It had never been found on a cellular level before. ROBERT KRULWICH: A set of brain cells, found on either side of the head, among all the billions of long branching cells in our brain, these so-called "mirror neurons," have surprising power. (NEURON FIRING): Clack, clack, clack.