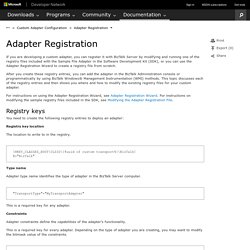 After you create these registry entries, you can add the adapter in the BizTalk Administration console or programmatically by using BizTalk Windows® Management Instrumentation (WMI) methods. This topic discusses each of the registry entries and then shows you where and how to modify the existing registry files for your custom adapter. BizTalk 24 * 7 - BlogDoc. Aggregating messages is a fairly common task in BizTalk.By "aggregating" I mean taking two separate messages with repeating elements and combining them into a new message which contains the elements of both messages - the same as doing a Union in SQL. 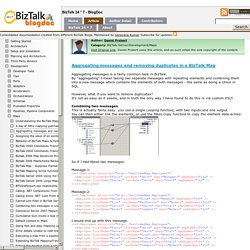 However, what if you want to remove duplicates? It's not as easy as it seems, and in truth the only way I have found to do this is via custom XSLT. Combining two messagesThis is actually fairly easy: you use a single Looping functoid, with two inputs and one output.You can then either link the elements, or use the Mass Copy functoid to copy the element data across: BizTalk BizTips: Sending Flat File over AS2 - A Practical Guide. This article focuses on how to send a flat file message from BizTalk to the Trading Partners using AS2 . 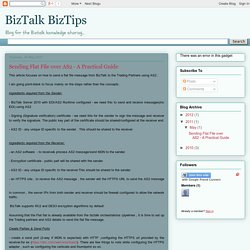 I am going point-blank to focus mainly on the steps rather than the concepts. Ingredients required from the Sender: - BizTalk Server 2010 with EDI/AS2 Runtime configured - we need this to send and receive messages(inc EDI) using AS2 - Signing (Signature verification) certificate - we need this for the sender to sign the message and receiver to verify the signature. The public key part of the certificate should be shared/configured at the receiver end. - AS2 ID - any unique ID specific to the sender . Useful Cheat Code in Mapping (Storing a Repeating Record in an Array) « BizTalk Server Tutorial.

This is another useful cheat code which will be very helpful in EDI mapping. 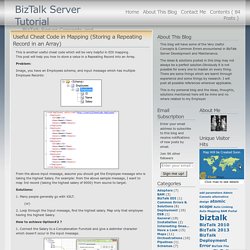 This post will help you how to store a value in a Repeating Record into an Array. Problem: Image, you have an Employees schema, and input message which has multiple Employee Records: From the above input message, assume you should get the Employee message who is taking the highest Salary. Using XPath Inside BizTalk Orchestrations - Stephen W. Thomas BizTalk MVP - BizTalk Blogs. Working with XPath inside Orchestrations is a powerful and simple feature of BizTalk 2004. 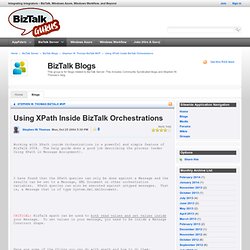 The help guide does a good job describing the process (under Using XPath in Message Assignment). I have found that the XPath queries can only be done against a Message and the results can be set to a Message, XML Document or other orchestration variables. XPath queries can also be executed against untyped messages. That is, a Message that is of type System.Xml.XmlDocument. CRITICAL: BizTalk xpath can be used to both read values and set values inside your Message. BizTalk and WCF: Part V, Publishing Operations Patterns. This fifth article in a series on BizTalk Server 2006 R2 and Windows Communication Foundation (WCF) integration, the focus shifts to exposing WCF services endpoints out of BizTalk Server. 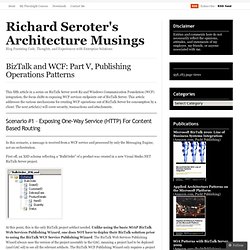 This article addresses the various mechanisms for creating WCF operations out of BizTalk Server for consumption by a client. The next article(s) will cover security, transactions and attachments. Scenario #1 – Exposing One-Way Service (HTTP) For Content Based Routing. Windows BizTalk: Sample: Error Handling in C# for Visual Studio 2010. BizTalk Server Hung in Production due to High volume. Hi sgbiztalk, what is the CPU utilization of the BizTalk server when it hangs? 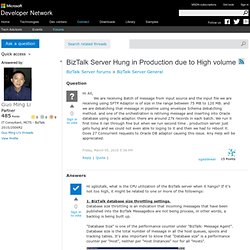 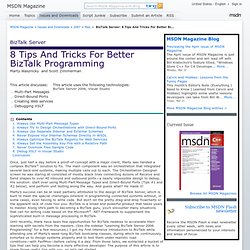 The main component was an orchestration that integrated several back-end systems, making multiple calls out to each. The Orchestration Designer screen he was staring at consisted of mostly black lines connecting dozens of Receive and Send shapes to over 40 inbound and outbound ports—a nearly impossible design to debug. Marty’s success can be at least partially attributed to the design of BizTalk Server, which is built to meet the special challenges inherent in programming connected systems without, in some cases, even having to write code.

Until recently, there have been few opportunities for BizTalk newbies to accelerate their learning with secrets from the masters. 1. Orchestration - Handle SOAP Exception and deal with Suspended (resumable) messages. The main reason for this blog post is due to this newsgroup post Download Sample from here. Step #1: Catching SOAP Exception: Whenever you call a Web service it's a good practice to handle the SOAP exception specifically rather than just leaving the orchestration to throw an un-handled exception which will result in orchestration service instance and all the referenced message instances being suspended. As shown in the following Orchestration diagram, handling a SOAP exception is straight forward. Place your "Send" shape inside a "Scope" and add an Exception Handler with "Exception Object Type" configured to System.Web.Services.Protocols.SoapException (You need to add reference to "System.Web.Services").