Berlusconi assolto, l'esultanza di Francesca Pascale. Free Online Video Editor & Maker. LYNDON BAINES JOHNSON: THE ASSASIN OF JFK!! How To Make An App With Zero Experience. While it seems like anyone can put together an app in an afternoon and make millions selling digital tat to nerds, it's not actually that simple. 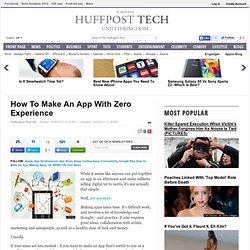 Well, not anymore. Making apps takes time. It's difficult work, and involves a lot of knowledge and thought - and practice. It also requires great ideas, collaboration with artists, marketing and salespeople, as well as a healthy dose of luck and money.

911Truth.org - Investigation. Education. Accountability. Reform.911Truth.org. Ansia e stress, disturbi psicologici, rimedi all'ansia, test di personalità. Internal Apple Document Shows Worries iPhone Growth Could Stall. Internal Apple documents show the concern, at least from the company’s sales force, that the portion of the market occupied by the iPhone was on the wane amid growing competition from Android devices that have either larger screens or lower prices than the iPhone. 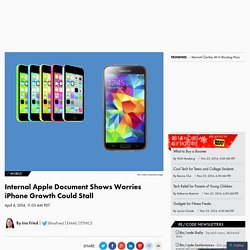 The shift in the market was accompanied by a rising Google ecosystem, the documents noted. “Competitors have drastically improved their hardware and in some cases their ecosystems,” a member of Apple’s sales team wrote in a document that was prepared as part of a fiscal 2014 offsite meeting. Portions of the document were shown Friday to the jury in the Apple-Samsung case. The document, which was presented as part of Samsung’s cross-examination of Apple Senior VP Phil Schiller, noted that all the growth in smartphones was coming either from large-screen devices costing more than $300 or from devices that cost less than $300, with the segment that included the iPhone showing decline.

More Posts About the Apple-Samsung Trial. Passenger Lists. According to the official story, teams of four and five Islamic hijackers took over Flights 11, 175, 77, and 93. 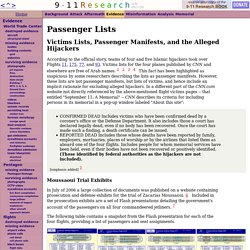 Victims lists for the four planes published by CNN and elsewhere are free of Arab names. 1 2 3 4 This fact has been highlighted as suspicious by some researchers describing the lists as passenger manifests. However, these lists are not passenger manifests, but lists of victims, and hence include an implicit rationale for excluding alleged hijackers. In a different part of the CNN.com website not directly referenced by the above-mentioned flight victims pages -- that entitled "September 11: A Memorial" -- CNN describes its criteria for including persons in its memorial in a pop-up window labeled "About this site":