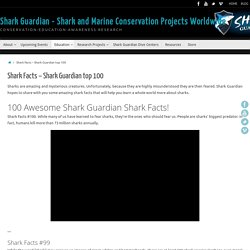 Unfortunately, because they are highly misunderstood they are then feared. Shark Guardian hopes to share with you some amazing shark facts that will help you learn a whole world more about sharks. Shark Facts #100. While many of us have learned to fear sharks, they’re the ones who should fear us. Shark Facts and Information. Slaughterhouse Said to Process "Horrifying" Number of Whale Sharks Annually.

Whale sharks are being slaughtered: That's the shocking news from a report issued by WildLifeRisk, a nongovernmental organization. 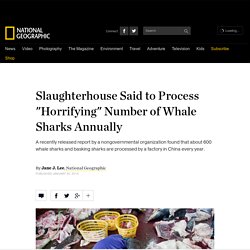 A three-year investigation provides evidence that a factory in southeastern China is cutting up about 600 of the 21-ton (19-tonne) fish a year. It's illegal—whale sharks are a protected species under Chinese and international law. But it's easy to understand why: A single carcass is worth about $30,000. The shark meat is sold for food, the fins are sold to restaurants for shark fin soup, the skin is sold to manufacturers for bags, and the oil is sold to companies that make fish oil supplements. The factory is also reportedly killing and processing other species under international protection, including basking sharks and great white sharks.

Hong Kong-based activists Alex Hofford and Paul Hilton, who founded WildLifeRisk, visited the facility in PuQi township (map), China, three times between 2010 and 2013, posing as buyers. Shark Facts — SEEtheWILD Wildlife Conservation Travel. They also possess a lateral line, a sensory organ comprised of a narrow line of sensory cells that runs the length of the body and into the head. 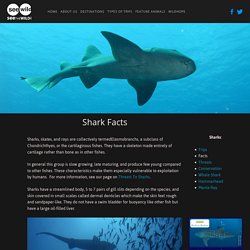 Some pelagic (open ocean) species do not have spiracles and rely on actively swimming to move water over their gills in order to obtain oxygen from the surrounding water. Skates and rays have pectoral fins that are enlarged to form “wings” that propel them through the water and have flattened bodies which help them to feed on the bottom. They are mainly bottom-dwelling with the exception of eagle and Manta rays. Great White Shark Facts. Few creatures strike more fear in humans than the great white shark. 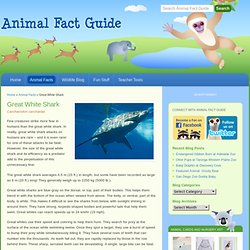 In reality, great white shark attacks on humans are rare – and it is even rarer for one of these attacks to be fatal. However, the size of the great white shark and its efficiency as a predator add to the perpetuation of this unnecessary fear. The great white shark averages 4.5 m (15 ft.) in length, but some have been recorded as large as 6 m (20 ft.) long! They generally weigh up to 2250 kg (5000 lb.). Hammerhead Sharks - Hammerhead Pictures - Shark Facts. Hammerhead sharks are consummate predators that use their oddly shaped heads to improve their ability to find prey. 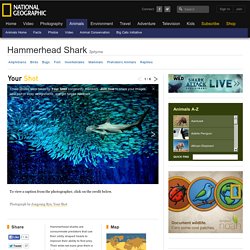 Their wide-set eyes give them a better visual range than most other sharks. And by spreading their highly specialized sensory organs over their wide, mallet-shaped head, they can more thoroughly scan the ocean for food. One group of sensory organs is the ampullae of Lorenzini, which allows sharks to detect, among other things, the electrical fields created by prey animals.

The hammerhead's increased ampullae sensitivity allows it to find its favorite meal, stingrays, which usually bury themselves under the sand. Basic Facts About Sharks. There are more than 465 known species of sharks living in our oceans today. 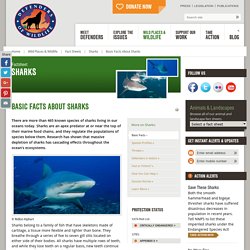 Sharks are an apex predator at or near the top of their marine food chains, and they regulate the populations of species below them. Research has shown that massive depletion of sharks has cascading effects throughout the ocean’s ecosystems. © Ridlon Kiphart Sharks belong to a family of fish that have skeletons made of cartilage, a tissue more flexible and lighter than bone. They breathe through a series of five to seven gill slits located on either side of their bodies. Shark ‘skin’ is made up of a series of scales that act as an outer skeleton for easy movement and for saving energy in the water. Diet Most species of shark eat things like fish, crustaceans, mollusks, plankton, krill, marine mammals and other sharks. Population It is difficult to estimate population numbers since there are many different species spanning a large geographic area.

Did You Know? Sharks predate the dinosaurs by 200 million years. Hammerhead Shark Protected Under the ESA. Hammerhead in net, © Seawatch.org Many, if not most, of our large terrestrial predators – lions, tigers, bears, and wolves – have enjoyed Endangered Species Act (ESA) protections for decades. 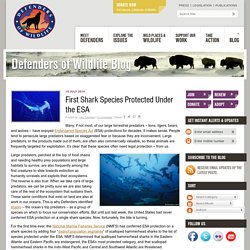 It makes sense. People tend to persecute large predators based on exaggerated fear or because they are inconvenient. Large predators, or the products made out of them, are often also commercially valuable, so these animals are frequently targeted for exploitation. It’s clear that these species often need legal protection – from us. Hammerheads, © ColombiaTravel Large predators, perched at the top of food chains and needing healthy prey populations and large habitats to survive, are also frequently among the first creatures to slide towards extinction as humanity unravels and exploits their ecosystems. Scalloped hammerhead sharks were already considered endangered by a team of experts at the International Union for the Conservation of Nature (IUCN).