17 Words the English Language Needs to Add to its Lexicon. BuzzFeed editor Daniel Dalton recently created a series of entertaining image macros, taking popular words/definitions from Urban Dictionary and overlaying them onto photographs from the royalty free image site, Unsplash. 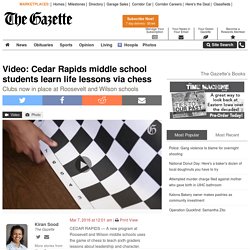 Boss Told Them to Jazz Up Their Cubicle So They Built a Cardboard Castle with Drawbridge. StumbleUpon. StumbleUpon. Will Ferrell Brought a Kitten to The Late Show Last Night. Though he has already run for president, scored one of the top hosting gigs on TV, and interviewed fictional dragon Smaug, Stephen Colbert had one of the most important nights of his career last night. 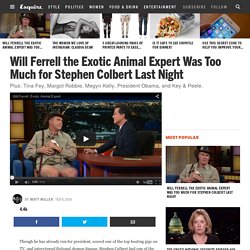 In an effort to give the show a ratings boost, CBS made the bold decision to run The Late Show in the coveted post-Super Bowl slot. The whole country—half drunk, sick on pizza, falling asleep—tuned into CBS as Colbert made his big moment. He didn't waste it. Advertisement - Continue Reading Below. Watch This Teacher’s Elaborate Adele Parody About Snow Days. 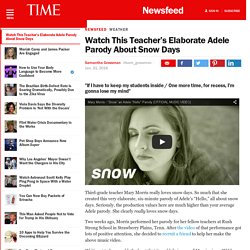 So much that she created this very elaborate, six-minute parody of Adele’s “Hello,” all about snow days. Seriously, the production values here are much higher than your average Adele parody. She clearly really loves snow days. Two weeks ago, Morris performed her parody for her fellow teachers at Rush Strong School in Strawberry Plains, Tenn. After the video of that performance got lots of positive attention, she decided to recruit a friend to help her make the above music video. This Plane Can Detach Its Cabin In Case Of Emergency. Man plays immagine by john lennon at piano near bataclan at paris attack. Teacherpreneurs: Changing education from the inside out SmartBlogs. Welcome to SmartBrief Education’s original content series about the unique stories of teacherpreneurs. 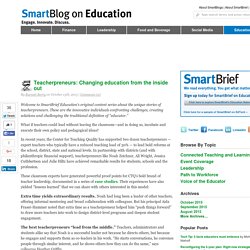 These are the innovative individuals confronting challenges, creating solutions and challenging the traditional definition of “educator.” What if teachers could lead without leaving the classroom—and in doing so, incubate and execute their own policy and pedagogical ideas? In recent years, the Center for Teaching Quality has supported two dozen teacherpreneurs — expert teachers who typically have a reduced teaching load of 50% — to lead bold reforms at the school, district, state and national levels. The U.S. recess predicament: Extraordinary photos of what we can learn from play in other parts of the world.

There's a reason why recess is so often a part of our most vivid memories of childhood. 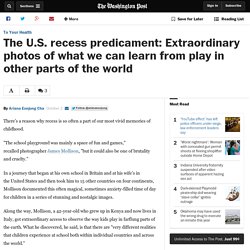 "The school playground was mainly a space of fun and games," recalled photographer James Mollison, "but it could also be one of brutality and cruelty. " In a journey that began at his own school in Britain and at his wife's in the United States and then took him to 15 other countries on four continents, Mollison documented this often magical, sometimes anxiety-filled time of day for children in a series of stunning and nostalgic images. Along the way, Mollison, a 42-year-old who grew up in Kenya and now lives in Italy, got extraordinary access to observe the way kids play in farflung parts of the earth. What he discovered, he said, is that there are "very different realities that children experience at school both within individual countries and across the world.

" In the United States, recess has become one of the most contentious topics in childhood education in recent years. 15 Interlocking Facts About LEGO. It looks like Barbie’s dream house is coming down, one brick at a time. 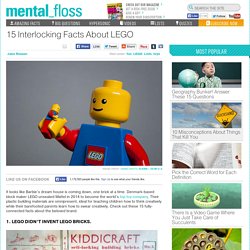 Denmark-based block maker LEGO unseated Mattel in 2014 to become the world’s top toy company. Their plastic building materials are omnipresent, ideal for teaching children how to think creatively while their barefooted parents learn how to swear creatively. Check out these 15 fully-connected facts about the beloved brand. A Breathtaking 4K Aerial Tour of Iceland. TwistedSifter The Best of the visual Web, sifted, sorted and summarized Aug 24, 2015. 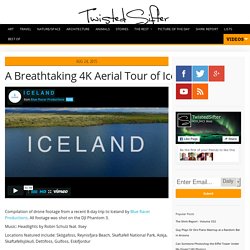 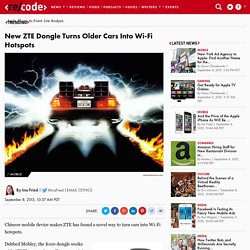 AT&T ZTE’s Mobley turns any car made since 1996 into a hotspot on wheels. Dubbed Mobley, the $100 dongle works with AT&T’s network to offer connectivity by plugging into the diagnostic port that exists on any car made since 1996. ZTE is the latest to tap the OBD-II port to bring modern connected car services to older cars. Verizon is using it to power a new service called Hum, while others are offering pay-per-mile insurance and other services. A phone or portable hotspot could serve the same function as Mobley, but having a dedicated device makes sure there is Wi-Fi anytime the car is running and also eliminates the need for another device that requires charging. Though still less well known than rivals, China’s ZTE has emerged as a significant player in the U.S., in part through inexpensive cellphones but also through creative niche products.

GoPro’s Virtual Reality Camera Costs $15,000, Lands in Early November. At Google I/O this year, Google gave a big thumbs-up to GoPro, announcing that the action camera maker would power some of the first 360-degree videos on YouTube. 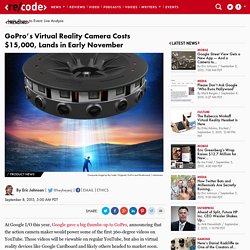 Those videos will be viewable on regular YouTube, but also in virtual reality devices like Google Cardboard and likely others headed to market soon. Google explained back then how its software would make videos filmed in 360 look good, but now we have some new details on what GoPro brings to the table: A sixteen-camera device called GoPro Odyssey, which will cost $15,000 when it launches in early November. You won’t be able to buy the Odyssey off store shelves, however. GoPro plans to sell it only to “select content partners” who apply through the camera’s website. Stephen Curry of Golden State Warriors makes 77 consecutive 3-pointers in practice.

Eight Ways of Looking at Intelligence. In “Thirteen Ways of Looking At A Blackbird,” poet Wallace Stevens takes something familiar—an ordinary black bird—and by looking at it from many different perspectives, makes us think about it in new ways. With apologies to Stevens, we’re going to take the same premise, but change the subject by considering eight ways of looking at intelligence—eight perspectives provided by the science of learning.

A few words about that term: The science of learning is a relatively new discipline born of an agglomeration of fields: cognitive science, psychology, philosophy, neuroscience. A dozen helpful Amazon Echo how-to tips and tricks. The Amazon Echo has found its way into our home (and it's clearly staying here). Even though it can be dumb as rocks sometimes, there are a few things (turning on and off the lighting, basic math, weather) that have provided a level of incremental convenience we've rapidly become used to. That said, in my quest to learn more about what we could do with the rat rod of Pringles cans, I've found some interesting tips and tricks that you might find useful as well. 1.

How to stop the Amazon Echo from listening for its wake word. Video Killed the Radio Star. Now What? Oklahoma Schools Condensing Schedule to Save Money, Attract Teachers. For a lot of schools in Oklahoma, juggling flat budgets with increasing costs means a bumpy road ahead for district superintendents. And getting teachers to work for the meager starting salary is also a struggle. So how do they make it work? Some districts in Oklahoma pay teachers in time – four days a week, instead of five. Explain Everything™ What The Internet Thinks About - Interactive Infographic. Pushing the Boundaries of Human Flight in the Skies of Dubai. Taking a Spin with FlyKly, the Bike Wheel that Does the Work for You (Video) Doctor Uses Robot to Stitch a Grape Back Together.

Berlin in July 1945 (HD 1080p color footage) Science rules! Bill Nye is building a spaceship that runs on sunbeams. What the Internet looks like: Undersea cables wiring ends of the Earth. NASA's experimental plane wing has 18 propellers. Twitter launches its live video-streaming app Periscope for iPhone, here's how it works. Less than two weeks after Twitter confirmed its acquisition of live video-streaming company Periscope, the social network has introduced the first fruits of this deal, kicking off with an iOS app. Periscope, which is optimized for iPhone, is all about letting you broadcast in real-time to your followers.