How the EU could change the world through Data Asylum. Here's an interesting though experiment. 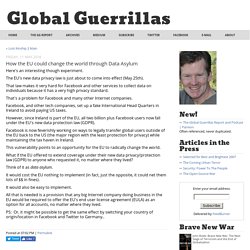 The EU's new data privacy law is just about to come into effect (May 25th). That law makes it very hard for Facebook and other services to collect data on individuals because it has a very high privacy standard. That's a problem for Facebook and many other Internet companies. Facebook, and other tech companies, set up a fake International Head Quarters in Ireland to avoid paying US taxes. GDPR 2017: Insights Analysis - Dec Edition. Legitimate Interests and Integrated Risk and Benefits Assessment. Anonymize IP Geolocation Accuracy Impact Assessment. 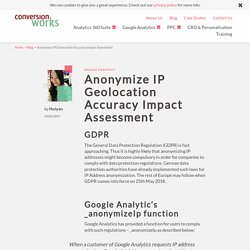 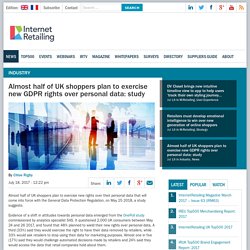 Evidence of a shift in attitudes towards personal data emerged from the OnePoll study commissioned by analytics specialist SAS. It questioned 2,000 UK consumers between May 24 and 26 2017, and found that 48% planned to wield their new rights over personal data. Gdpr joke. Awareness big thing with GDPR. Categories of Personal Information – Enterprivacy Consulting Group. I was looking around a few months ago for a good list of categories of personal information but couldn’t come up with anything I found that was comprehensive enough. 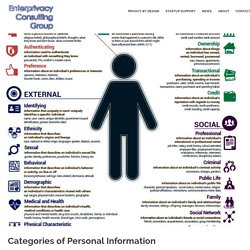 Everyone seems siloed in their little world (financial information, health information, etc..). Nuh-uh, Google, you WILL hand over emails stored on foreign servers, says US judge. Google has been ordered by a US court to cough up people's private Gmail messages stored overseas – because if that information can be viewed stateside, it is subject to American search warrants, apparently. 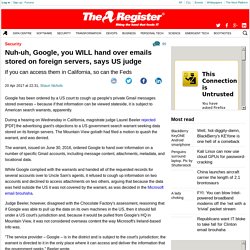 During a hearing on Wednesday in California, magistrate judge Laurel Beeler rejected [PDF] the advertising giant's objections to a US government search warrant seeking data stored on its foreign servers. The Mountain View goliath had filed a motion to quash the warrant, and was denied. The warrant, issued on June 30, 2016, ordered Google to hand over information on a number of specific Gmail accounts, including message content, attachments, metadata, and locational data.

"The service provider – Google – is in the district and is subject to the court's jurisdiction; the warrant is directed to it in the only place where it can access and deliver the information that the government seeks," Beeler wrote. The Impact of EU GDPR on Accountants. What to do to become compliant? The Impact of the EU GDPR on Accountants The working life of an accountant involves daily interaction with vast amounts of sensitive data. 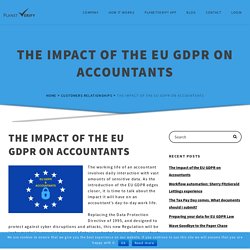 How Will GDPR Affect Your Web Analytics Tracking? - Piwik PRO - Cloud and Enterprise Analytics. You Won’t Believe All the Personal Data Facebook Has Collected on You. As much as consumers claim to have concerns around Facebook privacy issues, we sure don’t mind handing our information over to it left and right. 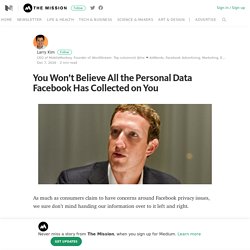 Every single day, more than a billion active users share their thoughts, photos, news, videos, memes, and more with friends and connections on Facebook. Sure, we know we’re sharing that content and the associated meta data that goes with it back to Facebook. Our sign-in and posting locations; where we took a certain photo; what events we attended and which artists we enjoy.

We share all of this, much of it indirectly, without a second thought. GDPR - New regulations could be your iceberg! - Agenci. Author Gary Hibberd On April 14th 1912 the RMS Titanic tragically collided with an iceberg on its maiden voyage, ending what many believed to be a golden age of technological breakthroughs and man’s dominance over nature. 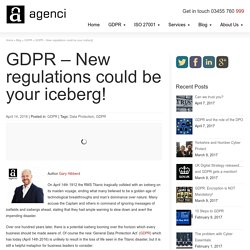 Anonymization and the Future of Data Science. By Steve Touw, CTO and Co-founder of Immuta. 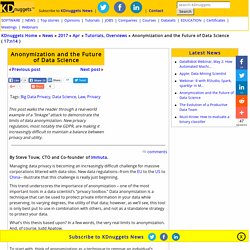 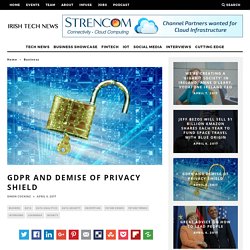 Image from pixabay here. In a little over a year, the most dramatic changes in data protection law in 20 years will take effect. GDPR match up: The Children's Online Privacy Protection Act. In this Privacy Tracker series, we look at laws from across the globe and match them up against the EU General Data Protection Regulation. The aim is to help you determine how much duplication of operational effort you might avoid as you move toward GDPR compliance and help you focus your efforts.

In this first installment, Tay Nguyen explores the relationship between provisions of the U.S. Children's Online Privacy Protection Act and rules for handling children's data in the GDPR. The European Union does not have an independent law that addresses the protection of children’s data similar to the United States’ Children’s Online Privacy Protection Act of 1998. Privacy Regulation - To which companies applies? Top 10 EU Privacy Regulation issues – #1 Which companies shall care about it?

The upcoming EU privacy regulation is relevant not only for European entities but any business looking at Europe because of its extended scope of applicability. The agreement reached at the European level on the new European General Data Protection Regulation (GDPR) is expected to lead to a revolution in the privacy world. Is Tesla Throwing Customer Privacy Under the Wheels? The Doors Are Thrown Open to all 85-Classes of the e-Discovery Team Training Program. I have decided to waive all tuition charges to attend my online training program. It is now entirely free.

You are not even required to register. Call it a senior moment if you will, but it just seemed like the right thing to do. This online e-discovery training program started at the University of Florida’s College of Law in 2010. Online e-Discovery Instruction in Law School Is Now a Reality, After two years of teaching the program online for U.F., I modified it somewhat and started a program available to anyone, not just U.F. law students.

Uber&apos;s redesigned app wants to mine personal information on your phone. Uber is taking its ride-hailing app down a new road in an effort to make it smarter, simpler and more fun to use. The redesigned app also will seek to mine personal information stored on smartphones in a change that could raise privacy concerns, even though it will be up to individual users to let Uber peer into their calendars and address books. The change represents the biggest overhaul in four years to Uber Technologies Inc.'s popular app, which is used by millions of people to summon cars in more than 450 cities around the world for rides that are usually cheaper than traditional taxis. But as Uber has grown, the app has been adding features that have made it more difficult to navigate.

The new design and features are designed to save passengers time and money. How’s Privacy Shield doing? Well, no one’s complaining. While the EU-U.S. Privacy Shield program has been the subject of much consternation, be it due to Trump administration executive orders or advocate-group lawsuits, the program continues to churn forward eight months after the U.S. Department of Commerce began taking applications on Aug. 1, 2016 and just a few months out from its first annual review. Already, reported U.S. Commerce Department Shield program administrator Caitlin Fennessy at the recent IAPP Data Protection Intensive in London, 1,800 companies have self-certified through the Shield program, with another 300 applications in the process.

Those 2,100 companies would represent roughly half of the companies that were participating in the Safe Harbor program at the end of its 10-year run. Who are these companies? Will the GDPR really make a difference to consumers? GDPR and your data: check you comply . . . then check again. Not only GDPR. A new set of data privacy rules is here.

Just after a few months since the European Parliament approved the final version of the new General Data Protection Regulation (GDPR), the European Commission is working on updating yet another set of privacy rules. The European Commission published a new text that, when approved, will replace the current ePrivacy Directive: the EU law that ensures confidentiality of communication and the protection of personal data in the electronic communications sector. Art29 WP. GDPR Infographic.