Clarion India is not responsible for views and claims expressed by contributors and for reports sourced by other media networks and news agencies. They do not necessarily represent or reflect the editorial policy of the publication.

Antony Blinken’s Nomination for US Secretary of State Evokes Optimism Among Indian Americans. Rise of Identity Politics: Minority Votes Hold Key in Bengal Assembly Elections. The party’s enviable performance in Bihar elections has escalated Owaisi’s confidence who has now set his eyes on Bengal and is bent on grabbing at least a fair share of the TMC-ruled state’s Muslim-dominated assembly constituencies Dr Mehebub Sahana | Clarion India AS the nail-biting Bihar assembly polls are over, the West Bengal assembly elections are a bull’s eye for all the political contenders. 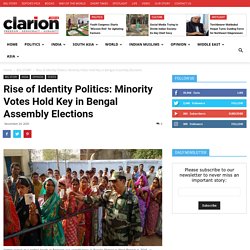 Scheduled in April-May 2021, the media stocks are skyrocketing with the analysis from political theorists, intellectuals, and commons, with the assumptions that Bihar elections might impact the upcoming Bengal polls. From the 2019 Lok Sabha elections, West Bengal is a state of sheer interest for the ruling Bharatiya Janata Party (BJP) to win due to several key factors connected to the national politics. The Centre’s political move to enact the Citizenship Amendment Act in December 2018 has infuriated the masses and sparked a nationwide No-NRC movement. Minority population and number game. After Time Magazine, BBC Names Shaheen Bagh Dadi in ‘100 Women of 2020’ List. Three other Indian women who also made it to the list are musician Isaivani, para-athlete Manasi Joshi and climate activist Ridhima Pandey Clarion India. 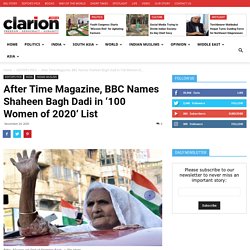 Tejasvi Surya, On Poll Campaign in Hyderabad, Enters Osmania University by Removing Police Barricades. Sikhs Welcome Muslims to 550-year-old Mosque Abandoned During Partition in Punjab’s Kapurthala. On November 13, Sikhs and Muslims of the area held a joint event to mark the opening of the mosque Clarion India NEW DELHI — Muslims offered prayers for the first time since 1947 in a 550-year-old mosque in Sultanpur Lodhi in Kapurthala district of Punjab last Friday. 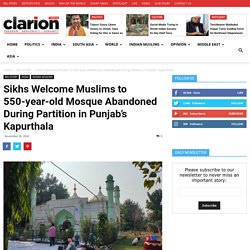 Sikh community members who helped repair the mosque welcomed the Muslims to the abandoned shrine situated inside a fort. Fewer Muslims Approaching Minorities Commission, Data of Last Six Years Reveal. Community leaders say it’s because of loss of faith in the functioning of the statutory body, though official gives credit to decrease in cases of discrimination against minorities Waquar Hasan | Clarion India NEW DELHI – Crimes against minorities, especially Muslims, are on the increase day in and day out but, strangely, data with the National Commission for Minorities (NCM) shows a decrease in the number of complaints lodged with the commission since 2014 when the Narendra Modi-led government was formed at the Centre. 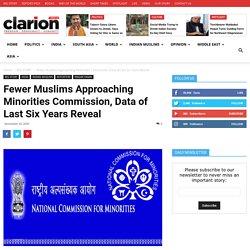 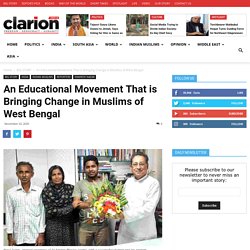 What is significant about this revolution is that it is happening in the marginalised section of Muslims. The Al-Ameen Mission, a Howrah-based charitable organisation, has been spearheading a movement for over three decades to educate those who can’t afford quality education. Its success graph is increasing each year. Supreme Court Refuses Delhi Police Plea Against Bail to Delhi Riot Accused Faizan Khan. The police had invoked the stringent UAPA against him, alleging SIM cards he supplied to fake IDs were used to coordinate protests against the CAA NEW DELHI — The Supreme Court on Monday declined to entertain Delhi Police’s plea against bail granted to a man accused of selling a SIM card on a fake identity to another accused in connection with the violence during the anti-CAA protests in the national capital in February. 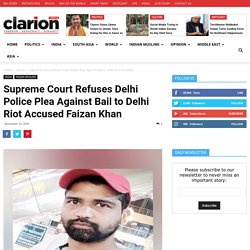 A bench headed by Justice Ashok Bhushan refused to entertain the Delhi Police appeal challenging the Delhi High Court’s October 23 order, granting bail to Faizan Khan, after observing that police have not brought on record convincing material to show the accused was involved in the conspiracy to organise protests against the CAA. The police had accused Khan of supplying a SIM card, without mandatory verification of identity, to a student to enable participation in the conspiracy without being identified. Married to Hindu Women, BJP Leaders’ Rant Against Love Jihad is Like Pot Calling Kettle Black. On Saturday, Chhattisgarh Chief Minister and senior Congress leader Bhupesh Baghel pointed out that family members of several BJP leaders have opted for inter-religion marriages, and asked whether they come under love jihad Clarion India NEW DELHI — A couple of days ago, Bharatiya Janata Party (BJP) leader Shahnawaz Hussain while campaigning in Srinagar for local bodies election was asked by a reporter whether his marriage with his wife who came from a Hindu family was a case of love jihad. 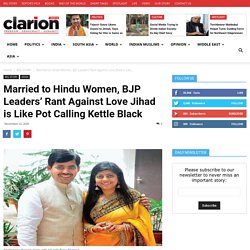 Hussain laughed it off, a video viral on social media shows. The reporter’s question was in the context of the debate triggered by recent announcements by several BJP-ruled states that they would enact laws against love jihad— a bogey invented by the Hindutva parties to allege that Muslim men entice Hindu women into marriage for converting them to Islam. First, it was the BJP government in Madhya Pradesh (MP) which said it would draft a law against love jihad. Eyebrows Raised As Registrar Says Questionnaire for NPR Being Finalised. Activists, who opposed CAA, continuously maintained that NPR was the first step towards the NRC. 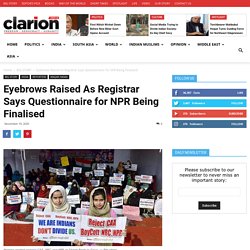 After gathering information through the NPR, the government can prepare the NRC list on its own Waquar Hasan | Clarion India NEW DELHI — The Narendra Modi government seems to be going ahead with its plan for the National Register of Citizen (NRC) despite protests and the pandemic as the office of the Registrar-General of India (RGI) has informed that the questionnaire for National Population Register (NPR), the first step of the NRC, is being finalised. Rajasthan’s Hindu Youth Tops Islamic Studies Test in Kashmir, Says Islamophobia Attracted Him to Subject. Yadav has not studied Islam in his school or college and did self-study to prepare for the test Zafar Aafaq | Clarion India NEW DELHI — Topping a university entrance test does not often make news but 21-year-old Shubham Yadav of Alwar in Rajasthan is being chased by mediapersons for setting the Jhelum River on fire. 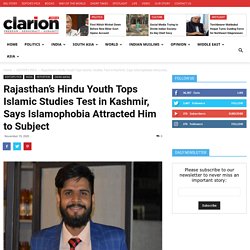 The non-Muslim, non-Kashmiri has created history by topping the list of 93 candidates for the entrance test for a Masters course in Islamic Studies at Central University of Kashmir . “This attention feels good,” said Yadav. “I have been receiving congratulatory messages from Kashmir.” He said he was attracted towards Islamic studies as he wanted to know about Islam amidst the rise in hate towards Muslims in India well as globally. “In the last six years, we have seen a significant rise in Islamophobia in the country,” Yadav said. After going through the Islamic literature, he has come to realise “Islam is not like the way it is being portrayed in public and media.” As Covid Pyres Burn Through Night: High Court Raps Delhi Govt.

The court asked he Delhi govt to file a status report indicating the steps it has been taking to ensure adequate facilities available for cremating those who are succumbing to the deadly virus. 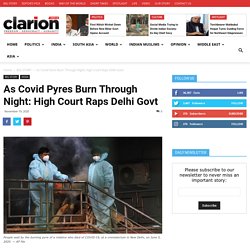 NEW DELHI — As deaths due to Covid rise with each passing day in the national capital, the Delhi High Court on Thursday asked the Aam Aadmi Party government to file a status report indicating the steps it has been taking to ensure adequate facilities available for cremating those who are succumbing to the deadly virus. “It’s disheartening to note that the number of deaths in the national capital have climbed to 131 in a day. Funeral pyres are burning through the night, the crematoriums are overflowing. “Are you conversant?” The high court asked the Delhi government. High Court Seeks Reply from UP Govt over Torture of Juveniles During Anti-CAA Protests. The petition was filed on the basis of a fact-finding report prepared by Quill Foundation in collaboration with Citizens Against Hate and HAQ-Centre for Child Rights Clarion India NEW DELHI — The Allahabad High Court has sought a reply from the Uttar Pradesh government over illegal detention and torture of juveniles during anti-CAA protests in the state in December last year.

The court is hearing a PIL filed by HAQ-Centre for Child Rights alleging that many minors were illegally detained and tortured in UP, particularly in Muzaffarnagar, Bijnor, Sambhal, and Lucknow, during the CAA-NRC protests. The petition was filed on the basis of a fact-finding report prepared by Quill Foundation in collaboration with Citizens Against Hate and HAQ-Centre for Child Rights.

It posted the matter for hearing on December 14. The report, titled ‘Brutalising Innocence–Detention, Torture and Criminalisation of Minors by UP police to quell anti-CAA protests’, was first released on January 31, 2020. High Court Seeks Reply from UP Govt over Torture of Juveniles During Anti-CAA Protests. Eyebrows Raised As Registrar Says Questionnaire for NPR Being Finalised.

While the four-month monsoon season (between June and September) sees a lot of thunder and lightening, the following four-month period (better known as the festive season) witnesses explosive noise that can rattle the nerves of most people and shatter the hearing sense of the young and the old. With the festive season setting in once again, millions of residents are hoping that the government would strictly implement the policy of low-key celebrations during the Covid crisis. 101 Students of Jamia’s Coaching Centre Clear UPSC Civil Services Prelims. The University claims that this is the highest number of qualified candidates from any public coaching centre Mohd Aasif | Clarion India NEW DELHI – As many as 101 students of Jamia Millia Islamia’s Residential Coaching Academy (RCA), Centre for Coaching and Career Planning (CCCP), have cleared UPSC’s Civil Services Prelims Exam 2020.

JMI, a central university, claims that this is the highest number of qualified candidates from any public coaching centre. Leader of Afghanistan’s Hizb-e-Islami to Visit Pakistan. ISLAMABAD — Gulbuddin Hekmatyar, leader of Afghanistan’s Hizb-e-Islami party, is scheduled to embark on a three-day visit to Pakistan on Monday, the Foreign Ministry here said. In a statement on Sunday, the Ministry said that during the visit Hekmatyar will hold discussions on the Afghan peace process and other bilateral issues, reports Xinhua news agency. Hekmatyar will call on President Arif Alvi, Prime Minister Imran Khan, and other senior leaders. He is also scheduled to address a policy think-tank and interact with the media, the statement said. “Pakistan attaches high importance to its fraternal ties with Afghanistan, rooted deep in shared history, faith, culture, values and traditions.

In Growing Crisis for Imran, Army Orders Probe into Arrest of Sharif Son-in-Law, Abduction of Sindh Police Chief. Probe comes after after local politicians alleged that Sindh province’s top police official, Mushtaq Ahmed Mahar, had been abducted on Monday by paramilitary troops, who coerced him into signing an order to arrest an opposition leader. Pakistan Invites Indian Sikhs for Guru Nanak’s 551st Birth Anniversary. Hamza Ameer ISLAMABAD — The Pakistan government has sent out invitations to Indian Sikhs to attend celebrations marking the 551st birth anniversary of Guru Nanak, the founder of Sikhism. As per the details of the invitation, sent in advance via the Indian Sikh Sangats, the devotees will be offered a five-day visa to enter Pakistan after a mandatory Covid-19 test.