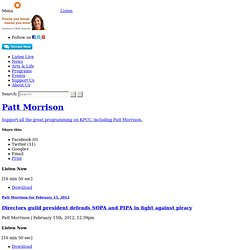 Google and other technology companies spread “outright lies” about anti-piracy bills, according to Directors Guild of America President Taylor Hackford. Supporters of SOPA, PIPA stick to their guns. Why Banks Back SOPA, the “Bring the Chinese Internet to America” Bill. Although lots of technology-related sites are correctly up in arms about the Stop Online Piracy Act, the MSM has given it short shrift, and the financial blogosphere has not paid much attention (cross posts of some of George Washington articles being a welcome exception). 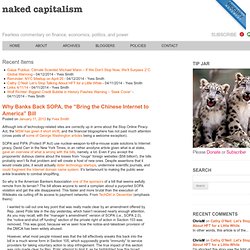 SOPA and PIPA (Protect IP Act) use nuclear-weapon-to-kill-a-mouse scale solutions to Internet piracy. David Carr in the New York Times, in an rather anodyne article given what is at stake, gave an overview of what is wrong with the bills, namely, a lot. Even if you accept the proponents’ dubious claims about the losses from “rouge” foreign websites ($58 billion!) , the bills probably won’t fix that problem and will create a host of new ones. Despite assertions that it would create jobs, it would actually deter technology startups, undermine scientific journals, and could fragment the Internet domain name system. I wanted to call out one key point that was really made clear by an amendment offered by Rep. Amidst SOPA and DMCA, Comedian Louis C.K. Speaks to Artists’ Relationship with Pirates. Popular comedian Louis C.K. 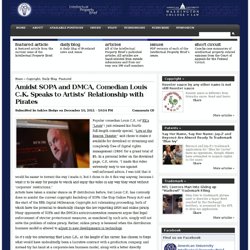 (of FX’s “Louie “) just released his fourth full-length comedy special, “ Live at the Beacon Theater, “ and chose to make it available for download or streaming and completely free of digital rights management (DRM) for a grand total of $5. In a personal letter on the download page, C.K. wrote, “I made this video extremely easy to use against well-informed advice.

I was told that it would be easier to torrent the way I made it, but I chose to do it this way anyway, because I want it to be easy for people to watch and enjoy this video in any way they want without ‘corporate’ restrictions.” Video game industry still supports anti-piracy bill. By Stephen C. 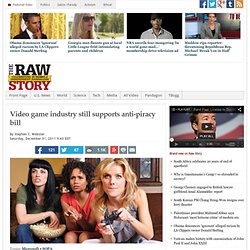 WebsterSaturday, December 31, 2011 9:43 EDT Despite a flurry of reports suggesting that the world’s largest video game companies have dropped their support for the controversial Stop Online Piracy Act (SOPA) — a bill which critics say could break the fundamental structure of the Internet in the U.S. — that assumption appears premature. The Internet was set aflutter the day before New Year’s Eve after Business Insider noticed that Nintendo, Electronic Arts (EA) and Sony Electronics had removed themselves from a list of official SOPA supporters (PDF) curated by the House Judiciary Committee.

Update on publishers and SOPA: Time for scholarly publishers to disavow the AAP. GoDaddy backs away from SOPA after mass. Here Is Godaddy’s Statement In Support Of The Stop Online Privacy Act House Hearing Tomorrow. Here is the statement Godaddy filed with the House: Background First, let me thank Chairman Smith for the opportunity to provide a written statement in support of the Stop Online Piracy Act and on the critical issue of combating illegal activity on the Internet. 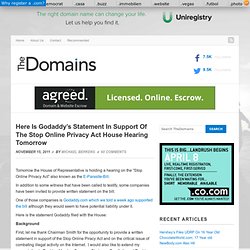 I would also like to extend my appreciation to Ranking Member Conyers, Chairman Goodlatte and Ranking Member Watt, as well as the other bi-partisan co-sponsors of the Stop Online Piracy Act (SOPA) for all of your efforts in addressing this important issue. This bill is the result of previous hearings, and months of meetings and discussions with all interested parties.

I know that this Committee took into consideration the concerns of all parties during this process, and I applaud your efforts. Go Daddy devotes considerable time and resources to working to preserve the integrity and safety of the Internet by quickly closing down websites and domain names engaged in illegal activities. Background on Go Daddy Our Enforcement Efforts. Nintendo, EA, Sony sponsor Internet censorship bill. Paul Graham: SOPA Supporting Companies No Longer Allowed At YC Demo Day. At this point quite a few internet companies have protested H.R. 3261, the Stop Online Piracy Act (SOPA) in creative ways. 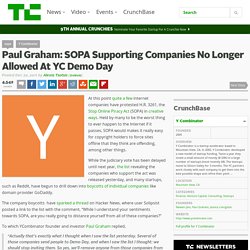 Held by many to be the worst thing to ever happen to the Internet if it passes, SOPA would makes it really easy for copyright holders to force sites offline that they think are offending, among other things. While the judiciary vote has been delayed until next year, the list revealing the companies who support the act was released yesterday, and many startups, such as Reddit, have begun to drill down into boycotts of individual companies like domain provider GoDaddy. The company boycotts have sparked a thread on Hacker News, where user Solipsist posted a link to the list with the comment, “While I understand your sentiments towards SOPA, are you really going to distance yourself from all of these companies?” To which YCombinator founder and investor Paul Graham replied, “Actually that’s exactly what I thought when I saw the list yesterday.

All the Companies Supporting SOPA, the Awful Internet Censorship Law and How to Contact Them. 3M takes SOPA REALLY seriously.