Google Says (Some) Missing Features Will Be Added To New Google Maps. Google took its new Maps site out of beta this week, but many users noticed that some of their favorite features from Classic Maps were missing. 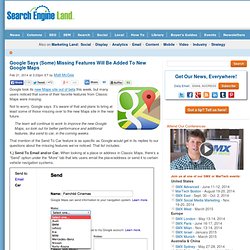 Not to worry, Google says. It’s aware of that and plans to bring at least some of those missing over to the new Maps site in the near future. The team will continue to work to improve the new Google Maps, so look out for better performance and additional features, like send to car, in the coming weeks. That mention of the Send To Car feature is as specific as Google would get in its replies to our questions about the missing features we’ve noticed.

G buys Nest. Google X Marks The Spot On 'Smart' Contact Lenses. Google+ Gmail consolidation. France slaps Google with maximum fine, citing privacy concerns. Gmail scanning becomes censorship. Earlier this weekend I was asked by a journalist friend of mine if I would mind answering a few questions for an article he was writing about the draft Data Protection Regulation and Safe Harbour. 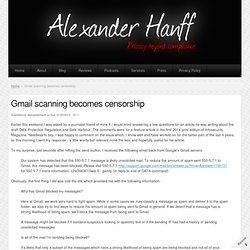 The comments were for a feature article in the first 2014 print edition of Infosecurity Magazine. Needless to say, I was happy to comment on the issue which, I know well and have worked on for the better part of the last 4 years; so this morning I sent my response - a little wordy but relevant none the less and hopefully useful for his article.

To my surprise, just seconds after hitting the send button, I received the following email back from Google's Gmail servers: Our system has detected that this 550-5.7.1 message is likely unsolicited mail. To reduce the amount of spam sent 550-5.7.1 to Gmail, this message has been blocked.

Google logs record 21.5M URL takedown requests in September. Google In Its Advertising Measurement War With Facebook. Google has introduced a new tool to allow advertisers to more accurately measure how many people are buying products after seeing an AdWords advertisement in Google search. 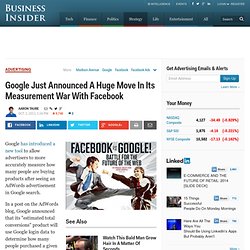 In a post on the AdWords blog, Google announced that its "estimated total conversions" product will use Google login data to determine how many people purchased a given product after seeing an advertisement in Google search. What's important about the new metric is that it will track these purchases, known in the marketing industry as "conversions," across smartphones, laptops, desktop computers, and tablets. India will reportedly ban use of US e-mail services.

The Indian government will reportedly ask all its employees to stop using Gmail for communication purposes to increase the security of confidential government information, amid revelations by former NSA contractor Edward Snowden on cyberspying by the U.S. 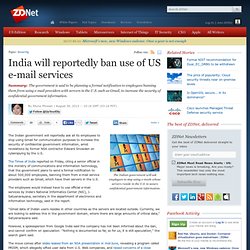 The Times of India reported on Friday, citing a senior official in the ministry of communications and information technology, that the government plans to send a formal notification to about 500,000 employees, banning them from e-mail service providers such as Gmail, which have their servers in the U.S. The employees would instead have to use official e-mail services by India's National Informatics Center (NIC), J. Satyanarayana, secretary in the department of electronics and information technology, said in the report.

"Gmail data of Indian users resides in other countries as the servers are located outside. However, a spokesperson from Google India said the company has not been informed about the ban, and cannot confirm on speculation. 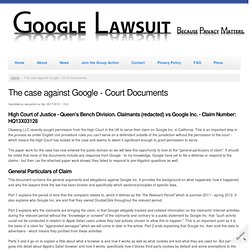 Claimants (redacted) vs Google Inc. - Claim Number: HQ13X03128 Olswang LLC recently sought permission from the High Court in the UK to serve their claim on Google Inc. in California. This is an important step in the process as under English civil procedure rules you can’t serve on a defendant outside of the jurisdiction without the permission of the court - which means the High Court has looked at the case and seems to deem it significant enough to grant permission to serve. The paper work for the case has now entered the public domain so we will take this opportunity to look at the "general particulars of claim". Google faces sanctions in Europe over privacy policy. A German data protection authority has begun a formal action against Google over changes the company made to its privacy policy last year. 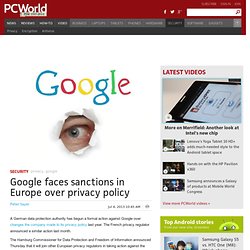 The French privacy regulator announced a similar action last month. The Hamburg Commissioner for Data Protection and Freedom of Information announced Thursday that it will join other European privacy regulators in taking action against the company. De-Googling « Eric Lee. I wonder if that’s a word. 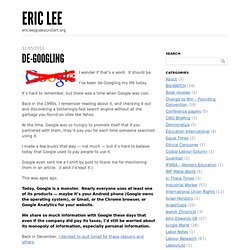 It should be. I’ve been de-Googling my life today. It’s hard to remember, but there was a time when Google was cool. Back in the 1990s, I remember reading about it, and checking it out and discovering a blisteringly-fast search engine without all the garbage you found on sites like Yahoo. 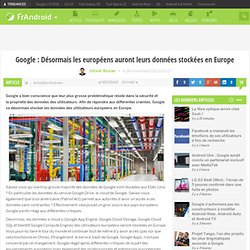 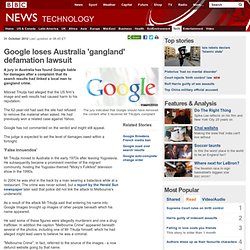 Milorad Trkulja had alleged that the US firm's image and web results had caused harm to his reputation. The 62-year-old had said the site had refused to remove the material when asked. He had previously won a related case against Yahoo.

Hey YouTube, I Don’t Want To Use My Full Name. It’s been a while since I logged in to my personal YouTube account, but when I did so a little while ago, I found out that YouTube wants me to start using my full name. 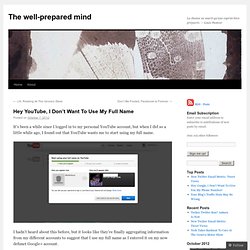 I hadn’t heard about this before, but it looks like they’re finally aggregating information from my different accounts to suggest that I use my full name as I entered it on my now defunct Google+ account. Fortunately, I was able to decline and continue using my username for now. However, when I clicked “I don’t want to use my full name,” I had to pass through one more hurdle before continuing to my home page. Sadly, I suspect this is just the first step. It may become harder and harder to keep using my username in the future. Like this: Le cours de l'action Google à son plus haut historique.

DUBAI: Iran’s Foreign Ministry threatened on Thursday to take legal action against Google for dropping the name Persian Gulf from its Google Maps and leaving the waterway between Iran and Arab states nameless, state television reported. “One of the seditionist acts taken as part of the soft war against the Iranian nation has been Google’s shameless act to drop the name ‘Persian Gulf’ which is … against historical documents,” Foreign Ministry spokesman Ramin Mehmanparast was quoted as saying.

Japan Court Tells Google to Disable Autocomplete. A Japanese court has issued a provisional order requesting Google to delete specific terms from autocomplete, following a complaint from a man claiming it violates his privacy and has hampered his career. The challenge, which is said to be the first against the feature, centres around the results that show when entering the man’s name into the search engine in Japanese. According to a report from Mainichi Daily News, his name — which is undisclosed — generates more than 10,000 words that are defaming or disparaging of him.

FRANCE 24 Français - Google+ - Dans quelques heures, à 13h, France 24 vous invite à son… _paladine_: Who Regulates the Regulator? Take yourself back to May 2011, the month that changes to the ePrivacy Directive (Article 5(3)) were supposed to be transposed into national laws across Europe; the purpose of the changes was to better protect European Citizens from unauthorised behavioural tracking of their online activities. This was a change I had pushed for over the previous years through my privacy work, so obviously I was looking forward to seeing the outcome of what had been a very tiring and long process. Things were looking good at the beginning of the month, the Information Commissioner's Office were making very positive noises about the changes and it looked like everything was going to go ahead without a glitch.

Around the same time, Google held a "Big Tent" event in the UK and it was brought to my attention that Eric Schmidt had been seen entering 10 Downing Street around the same date. I sent the following request for information to DCMS on 27th May 2011: "Dear Department for Culture, Media and Sport, Matt 1.