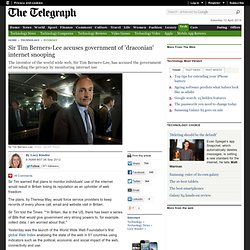 “If the UK introduces draconian legislation that allows the Government to block websites or to snoop on people, which decreases privacy, in future indexes they may find themselves farther down the list,” he said. The draft bill extends the type of data that internet service providers must store for at least 12 months. Providers would also be required to keep details of a much wider set of data, including use of social network sites, webmail and voice calls over the internet.

Mrs May has justified the need for the new legislation by saying that it is necessary to combat organised crime and terrorism. Sir Tim's comments came on the same day as he denied that there was an 'off'; switch for the internet. He said the only way the internet could only ever be completely shut down is if governments across the world coordinated to make it a centralised system:

Court's ruling that employees have no blanket entitlement to tak

Disney Can Track Your Every Move with NSA-Style Wristbands. Warrantless surveillance law may face test in criminal case. Private Cies collecting data under scrutiny. US candidates Apps suck private data. Etexbook spying on students. De-anonymisation. McDo collect kids data. Rich kids on instagram. Infographic use of data. It's Your Data — But Others Are Making Billions Off It. It’s hard to mandate laws around privacy. 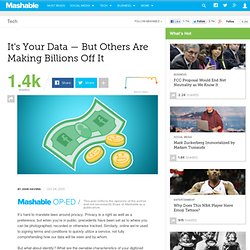 Privacy is a right as well as a preference, but when you’re in public, precedents have been set as to where you can be photographed, recorded or otherwise tracked. Similarly, online we’re used to signing terms and conditions to quickly utilize a service, not fully comprehending how our data will be seen and by whom. But what about identity? Which Websites Are Sharing Your Personal Details? They Know What You're Shopping For. Are the Feds Stalking You on Facebook? This may or may not be news to you, but Facebook is recording your location – specifically, wherever you are every time you log in to the service. 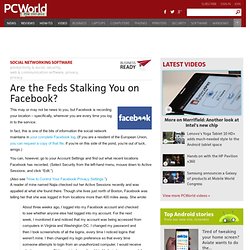 In fact, this is one of the bits of information the social network maintains in your complete Facebook log. (If you are a resident of the European Union, you can request a copy of that file. If you’re on this side of the pond, you’re out of luck, amigo.) You can, however, go to your Account Settings and find out what recent locations Facebook has recorded. (Select Security from the left-hand menu, mouse down to Active Sessions, and click “Edit.”) (Also see "How to Control Your Facebook Privacy Settings. ") 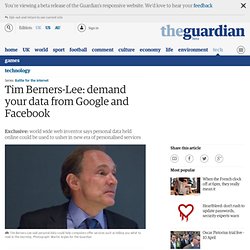 Berners-Lee, the British born MIT professor who invented the web three decades ago, says that while there has been an explosion of public data made available in recent years, individuals have not yet understood the value to them of the personal data held about them by different web companies. In an interview with the Guardian, Berners-Lee said: "My computer has a great understanding of my state of fitness, of the things I'm eating, of the places I'm at. My phone understands from being in my pocket how much exercise I've been getting and how many stairs I've been walking up and so on.

" "It's interesting that people throughout the existence of the web have been concerned about monopolies. ISPs kept in dark about UK's plans to intercept Twitter. The government has expanded its plans to store and monitor Twitter, Facebook and other personal web communication data, but these are being created without official ISP involvement, according to an ISP representative body. 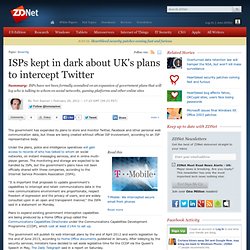 Under the plans, police and intelligence operatives will gain access to records of who has talked to whom on social networks, on instant messaging services, and in online multi-player games. The monitoring and storage are expected to be handled by ISPs, but the government's plans have not been officially shared with these companies, according to the Internet Service Providers Association (ISPA).

Some things never change at the Home Office. The Coalition Agreement promised to “end the storage of internet and email records without good reason”. A simple and straightforward commitment that we wholeheartedly welcomed as a major step to protecting privacy online and reversing Labour’s planned ‘Intercept Modernisation Programme.’ However, buried in the Strategic Defence and Security Review, the Government said it plans to introduce “a programme to preserve the ability of the security, intelligence and law enforcement agencies to obtain communication data and to intercept communications.”

Step forward the Communications Capabilities Development Programme (CCDP), which will be proposed in new legislation in the coming months, as highlighted in today’s Telegraph. In theory, the two objectives are not contradictory – we have no problem with the security services having the capability to monitor someone they believe to pose a risk to the public. The question is that the capability is used after a suspect is identified. Are UK Police Hacking File-Sharers' Computers? 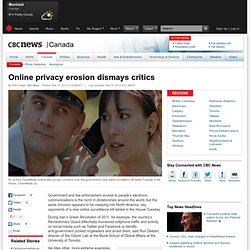 During Iran’s Green Revolution of 2011, for example, the country’s Revolutionary Guard effectively monitored cellphone traffic and activity on social media such as Twitter and Facebook to identify anti-government protest ringleaders and arrest them, said Ron Deibert, director of the Citizen Lab at the Munk School of Global Affairs at the University of Toronto. He cites other, more extreme examples, where governments have completely shut down their countries’ internet to exert control and quell opposition, including in Egypt last year, Burma in 2007 and Nepal in 2005. "It’s a very fragile ecosystem, even though we take it for granted. Just because it’s open now, doesn’t mean it will always be that way. Profiling based on mobile, online behavior: a privacy issue. CORVALLIS, Ore. – It’s illegal for businesses and law enforcement to profile a person based on their race, gender, or ethnicity, yet millions of Americans are being profiled every day based on their online consumer behavior and demographics.

Known as consumer profiling for behavioral advertising purposes, this type of profiling is largely unregulated. The result, according to two recent articles in the journal of Computer Law & Security Review, is that consumers have less privacy and are being targeted by advertisers using increasingly sophisticated measures, which may include efforts to alter behavior based on online tracking and profiling. 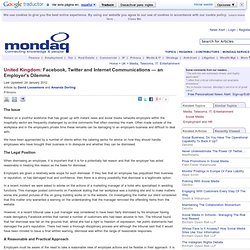