Norway’s Radioactive Reindeer. Thirty years ago, the Chernobyl Nuclear Power Plant disaster took place, releasing massive amounts of radioactive material into the atmosphere, which drifted across much of Russia and Europe. 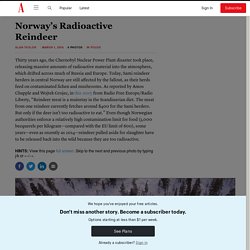 Today, Sami reindeer herders in central Norway are still affected by the fallout, as their herds feed on contaminated lichen and mushrooms. As reported by Amos Chapple and Wojtek Grojec, in this story from Radio Free Europe/Radio Liberty, “Reindeer meat is a mainstay in the Scandinavian diet. The meat from one reindeer currently fetches around $400 for the Sami herders. But only if the deer isn’t too radioactive to eat.” Even though Norwegian authorities enforce a relatively high contamination limit for food (3,000 becquerels per kilogram—compared with the EU limit of 600), some years—even as recently as 2014—reindeer pulled aside for slaughter have to be released back into the wild because they are too radioactive.

(9) What /Actually/ Happened at Chernobyl. The Terrifying Reasons We're Confronting the Chernobyl Disaster Right Now. Russia hates HBO's Chernobyl, decides to make its own series. Abandoned trains in the Chernobyl zone. Very interesting place. At Chernobyl, Hints of Nature’s Adaptation. Plenty of Fantasy in HBO’s ‘Chernobyl,’ but the Truth Is Real. Chernobyl: Capping a Catastrophe. Scene Go to the vent block roof. The Babushkas of Chernobyl. Coming soon to a festival near you. 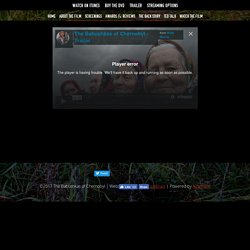 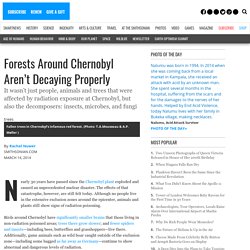 The effects of that catastrophe, however, are still felt today. Although no people live in the extensive exclusion zones around the epicenter, animals and plants still show signs of radiation poisoning. Birds around Chernobyl have significantly smaller brains that those living in non-radiation poisoned areas; trees there grow slower; and fewer spiders and insects—including bees, butterflies and grasshoppers—live there.

Additionally, game animals such as wild boar caught outside of the exclusion zone—including some bagged as far away as Germany—continue to show abnormal and dangerous levels of radiation. However, there are even more fundamental issues going on in the environment. Grab your Geiger counter: a trip to Chernobyl's first rave. It is a two-hour drive from the centre of Kiev, following the banks of the Dnieper river into the woods. 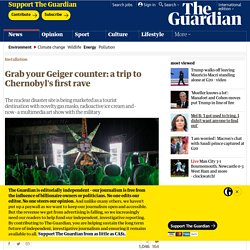 It is minus six degrees outside. Wild dogs scavenge at the side of the road. Our bus comes to a stop and military men in uniform tell us to disembark and ready our passports. The 3 Forgotten Heroes Of The Chernobyl Disaster. Red skies and abandoned ostriches: the fallout from Fukushima – in pictures. How many did Chernobyl kill? More than 4,000….click 2x. April 26 will mark the 25th anniversary of the Chernobyl nuclear accident. 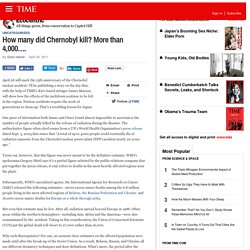 I’ll be publishing a story on the day that, with the help of TIME’s Kiev-based stringer James Marson, will show how the effects of the meltdown continue to be felt in the region. Nuclear accidents require the work of generations to clean-up. That’s a troubling lesson for Japan. Chernobyl 'suicide squad' volunteers helped save Europe click 2x. Chernobyl Exclusion Zone Captured Through Infrared Photography. Czech boars still radioactive 31 years after Chernobyl.

The Puppies of Chernobyl. A look at the 1986 Chernobyl nuclear disaster in numbers. 'We're not afraid of radiation'; Test finds Chornobyl residue in Belarus milk. GUBAREVICHI, Belarus -- On the edge of Belarus' Chornobyl exclusion zone, down the road from the signs warning "Stop! 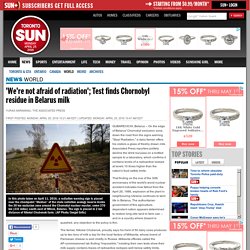 Radiation," a dairy farmer offers his visitors a glass of freshly drawn milk. Associated Press reporters politely decline the drink but pass on a bottled sample to a laboratory, which confirms it contains levels of a radioactive isotope at levels 10 times higher than the nation's food safety limits. At Chernobyl and Fukushima, radioactivity has seriously harmed wildlife. The largest nuclear disaster in history occurred 30 years ago at the Chernobyl Nuclear Power Plant in what was then the Soviet Union. 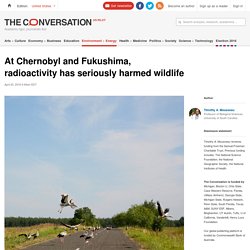 The meltdown, explosions and nuclear fire that burned for 10 days injected enormous quantities of radioactivity into the atmosphere and contaminated vast areas of Europe and Eurasia. The International Atomic Energy Agency estimates that Chernobyl released 400 times more radioactivity into the atmosphere than the bomb dropped on Hiroshima in 1945. Radioactive cesium from Chernobyl can still be detected in some food products today. And in parts of central, eastern and northern Europe many animals, plants and mushrooms still contain so much radioactivity that they are unsafe for human consumption. The first atomic bomb exploded at Alamogordo, New Mexico more than 70 years ago. However, in the past decade population biologists have made considerable progress in documenting how radioactivity affects plants, animals and microbes. After 30 years, Chernobyl repair racing against time.

CHERNOBYL NUCLEAR POWER STATION, Ukraine- Thirty years after the world's worst nuclear accident, theChernobyl power plant is surrounded by both desolation and clangorous activity, the sense of a ruined past and a difficult future. 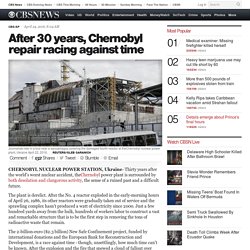 The plant is derelict. After the No. 4 reactor exploded in the early-morning hours of April 26, 1986, its other reactors were gradually taken out of service and the sprawling complex hasn't produced a watt of electricity since 2000. Just a few hundred yards away from the hulk, hundreds of workers labor to construct a vast and remarkable structure that is to be the first step in removing the tons of radioactive waste that remain. The 2-billion-euro ($2.3 billion) New Safe Confinement project, funded by international donations and the European Bank for Reconstruction and Development, is a race against time - though, unsettlingly, how much time can't be known. Construction has been plagued by more than just the challenges of radiation. 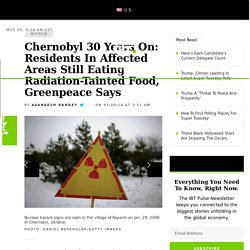 “Due to the reduced financial support to deal with the aftermath of the Chernobyl disaster, control of contaminated foodstuffs is reduced, less money is available to implement protective measures, and less scientific monitoring data are available,” Greenpeace, which investigated the levels of radioactive contamination of locally produced food, said in the report.

Ukraine is currently reeling under a political turmoil made worse by pro-Russian insurgency in its eastern territories. This has severely impacted the country’s economy, which is believed to have contracted over 10 percent last year. Long-term exposure to radiation can lead to severe illnesses. Chernobyl: Two Days in the Exclusion Zone.