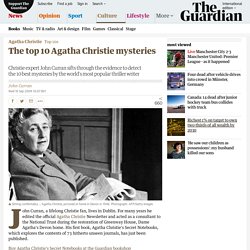 For many years he edited the official Agatha Christie Newsletter and acted as a consultant to the National Trust during the restoration of Greenway House, Dame Agatha's Devon home. His first book, Agatha Christie's Secret Notebooks, which explores the contents of 73 hitherto unseen journals, has just been published. Buy Agatha Christie's Secret Notebooks at the Guardian bookshop "Agatha Christie was the greatest exponent of the classical detective story. Her unique literary talents have crossed every boundary of age, race, class, geography and education. 1. Hercule Poirot has retired to the village of King's Abbot to cultivate marrows. 2. The impoverished owner of End House hosts a party where fireworks camouflage the shot that kills her cousin. 3.

The glamorous Orient Express stops during the night, blocked by snowdrifts. 4. 5. Ten people are invited to an island for the weekend. Top 10 books about the apocalypse. The apocalypse – the literal end of the world – has long captured humanity’s dark imagination. 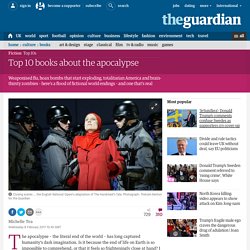 Is it because the end of life on Earth is so impossible to comprehend, or that it feels so frighteningly close at hand? I personally enjoy the terrible dread of dropping into a world near enough to my own that the path it takes to destruction is unsettlingly familiar. However, I also seek out the more personal, poetic explorations of the concept of “apocalypse”, when what is popped is the intimate bubble of our own reality. Apocalypse films and TV shows keep me on the edge of my seat, heart giddily racing – The Walking Dead, where the horrors perpetrated by the living outpace the deeds of the (un)dead; World War Z and 28 Days Later occupy their own space in my psyche.

Here is a collection of literary apocalypses that will stun you with their visions of ultimate endings both small and catastrophic. Top 10 New York novels. In novels, a great city is a setting. 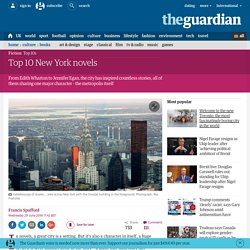 But it’s also a character in itself, a huge compound being, that the individuals living in it react to, live in the shadow of, as if it were another actor in the story – a giant that somebody has smuggled into the cast list. New York has such a powerful mythic presence that it has generated whole genres and subgenres. There’s the story of the immigrant, arriving from the Old World and taking New York as the very archetype of the New World’s newness. There’s the story of the rube from Oklahoma or Texas, for whom on the contrary the city scarcely seems American at all. There’s the story in which the city stands for money, quicksilver and dangerous, a solvent of all possible desires. There’s a whole, glittering kaleidoscope of New York fiction already in existence, which makes you hesitate before trying to add to it, especially if you’re an outsider.

Top 10 books about guilt. Guilt cowers red-faced at the edge of the party, wringing its hands. 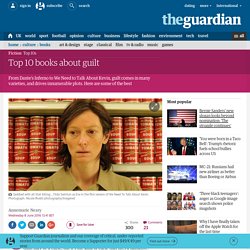 Enter the novelist who desires nothing more than to dance with it all night long. Guilt may be a curse, but it’s the kind of curse that fires a narrative. Fictional guilt is as tenacious as Dante’s demons, as indelible as Duncan’s blood. Top 10 books to make you a better person. “If I knew for a certainty that a man was coming to my house with the conscious design of doing me good, I should run for my life,” wrote Thoreau, and this is roughly how I feel about the man giving me a book that will make me a better person. 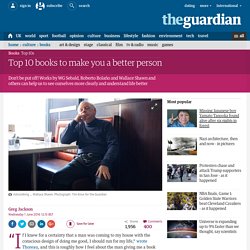 I dislike him, and yet here I am risking becoming him. Worse still, I seem to be suggesting that my own book bears mention in this dubious, self-approving category. Writing an “improving” book sounds like a terrific way of repelling readers. When I wrote my book, Prodigals, I intended, if anything, no more than to give voice to the tensions I felt pulling me apart from the inside. 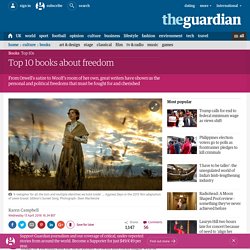 , and you probably have an instant vision of Mel Gibson with blue paint on his face in the film Braveheart. Erase that image (if you can), and the next picture to swim into focus might well be Saltires in George Square, as September 2014 seethed with sunshine and debate on the Scottish referendum on independence. Or the words might conjure an empty glen with a vast blue sky, a stately stag on a distant purple mountain, an open road on which to walk.

When I wrote my novel Rise, I wanted to take all these images together and have Braveheart ride a deer through the shopping precinct of Sauchiehall Street. Well not quite, but you get the picture. Rise begins with a young woman called Justine, who is fleeing the city to the freedom of a new start – anywhere but the city will do. Here are some of the books that I think Justine might have taken with her: