Thembacrazed1991: GPAT Registration begins on October 20, 2017! GPAT Exam Pattern – Chandrakala Radhakrishnan. All India Council for Technical Education, the exam conducting body would be announcing the GPAT Exam pattern in the month of November. 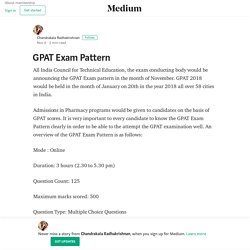 GPAT 2018 would be held in the month of January on 20th in the year 2018 all over 58 cities in India. Admissions in Pharmacy programs would be given to candidates on the basis of GPAT scores. It is very important to every candidate to know the GPAT Exam Pattern clearly in order to be able to the attempt the GPAT examination well. 25,000 candidates registered for NTSE Stage 1 Exam conducted on Sunday.

By: R Chandrakala on November 08, 2017 NTSE (National Talent Search Examination) Level 1 was conducted on Sunday, wherein a total of 25,403 candidates had registered. 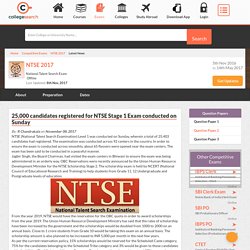 The examination was conducted across 92 centers in the country. In order to ensure the exam is conducted across smoothly, about 65 flyovers were opened near the exam centers. The exam has been said to be conducted in a peaceful manner. Thembacrazed1991: All a candidate needs to know about LIC AAO! Shiksha Mitras: From Para-teachers to giving the TET. Shiksha Mitras: From Para-teachers to giving the TET. SSC CGL Tier 1 Result releasing tomorrow. CAT Admit Card can be downloaded from the official website today! By: R Chandrakala on October 25, 2017 The CAT Admit Card would be activated today, from 1 pm onwards. 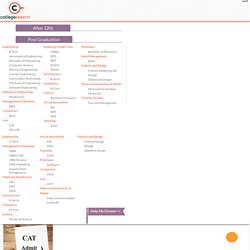 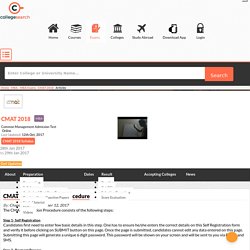 One has to ensure he/she enters the correct details on this Self Registration form and verify it before clicking on SUBMIT button on this page. Once the page is submitted, candidates cannot edit any data entered on this page. Step 2- Payment Process. WordPress.com. IBPS RRB Call Letter for Office Assistant released. Applied Colleges Need any help? 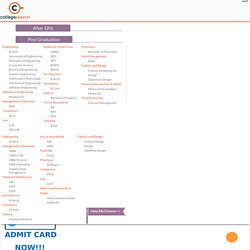 Write to us at info@collegesearch.in Follow Us. — BCECE Counselling and Seat Allotment procedure. IBPS PO Prelims Result expected to be declared soon. By: R Chandrakala on October 23, 2017 IBPS PO Prelims was held on the following dates: 7,8,14 and 15 October 2017. 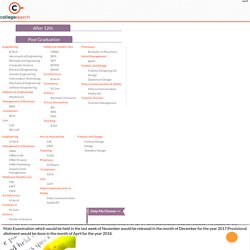 The main examination is scheduled on 26 November 2017, the prelims result is expected to be on or before October 31, 2017. As per the IBPS Official notification, the online preliminary examination result is slated to be declared within this month. Candidates who qualify Prelims and are slated to appear for Mains should start preparing for the same with equal intensity. After the IBPS PO Result for the Preliminary Examination is declared, admit cards/call letters for IBPS Mains Examination shall be released. The IBPS PO Mains Examination would be comprising of Letter and Essay Writing apart from sections like Reasoning, Computer Aptitude, General/Economy/Banking Awareness, Data Analysis and Interpretation for a total duration of 3.5 hours attempting 157 questions. 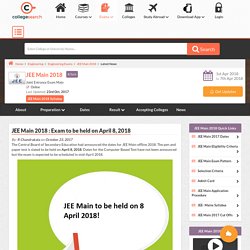 The pen and paper test is slated to be held on April 8, 2018. Quora. Quora. AIIMS 2018 - Dates, Application, Preparation and Result. The AIIMS Exam is normally held in two shifts on account of which a Normalization Procedure is usually adopted. 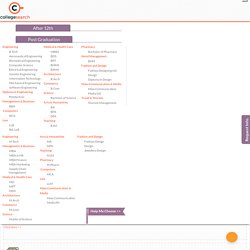 This would be made use of to decide the inter-se/merit ranking among the candidates who appeared for the examination. JEE Main 2018: Notification to be released in November. By: Shreyansh Shrivastava on October 13, 2017 CBSE would be releasing the JEE Main 2018 Notification by the end of November month. 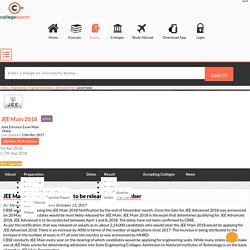 JEE Main 2018: Everything a candidate must know. The JEE Main Fever is back to strike the engineering aspirants this year. 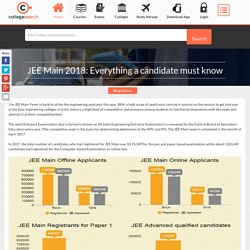 With a high surge of applicants coming in session on the session to get into one of the best engineering colleges in India, there is a high level of competition and pressure among students to familiarize themselves with the exam and attempt it at their competitive best. The Joint Entrance Examination also is formerly known as All India Engineering Entrance Examination is convened by the Central Board of Secondary Education every year. This competitive exam is the basis for determining admissions to the NITs and IITs. The JEE Main exam is scheduled in the month of April 2017. In 2017, the total number of candidates who had registered for JEE Main was 10,15,349 for the pen and paper based examination while about 1,83,640 candidates had registered for the Computer-based Examination or online test.

Here are a few details that a candidate applying for the JEE Main should familiarize himself with. 1. CMAT Registration slated to begin from October 21. By: R Chandrakala on October 12, 2017 AICTE conducts CMAT (Common Management Admission Test) for candidates every year seeking admissions to MBA programs offered by AICTE Approved institutions/ Departments/Constituent Colleges/Affiliated Colleges all over the country. The last date to register for CMAT is December 15, 2017. The CMAT 2018 Result is tentatively expected to be announced in the month of February after which the counseling dates would be announced in the month of February. Candidates applying for CMAT should possess a graduation degree in any discipline from a recognized university and candidates in their final year of their degree can also apply for CMAT examination.

The CMAT exam Pattern consists of 4 sections as follows: Quantitative Logical Reasoning Language General Awareness Every section would have 25 questions and would carry 100 marks each. IBPS RRB Mains Strategy: Officer Scale – 1 and Office Assistant. By: R Chandrakala on October 11, 2017 The IBPS RRB Prelims Result has been out for the candidates and the selected few would be concerned about their focus on preparing right for RRB Mains.

Every candidate, as usual, is expected to have a good knowledge about the syllabus, examination pattern and planning all of that in a way wherein revision is done before the date of the examination. The Mains Examination is slated to be for a duration of 2 hours out of which a candidate is expected to prepare for the following 5 sections: Reasoning Language General Awareness Quantitative Aptitude Computer Knowledge The way to score marks in Quantitative Aptitude Section would be by way of attempting questions relating to Quadratic Equations, Number series, Simplification, and Approximation. Reasoning section should be attempted by a candidate to the maximum best by first approaching questions, not in the form of puzzles. Q1.Who administers NMAT by GMAC™ test? Ans.The NMAT by GMAT is a computer administered test owned by the Graduate Management Global Connection (India) Private Limited (GMGC), a subsidiary of Graduate Management Admission Council (GMAC).

Q2.Which Universities / Business Schools accept NMAT scores for admissions? JEE Advanced 2018: 2.24 Lakh Students would qualify for JEE Advanced. XAT Essay Writing: Know how to ace this section. While Game of Thrones is a worldwide admiration, there are certain important things that can be taken note of by candidates, particularly those applying for their MBA. Thembacrazed1991: UPTET News and Updates. Preparing for GK in IIFT – Chandrakala Radhakrishnan – Medium. UPTET 2017: Download rush causing error on website. NMAT 2017: Know how the paper was on 5th October 2017! IBPS PO: 20 Quick Time Management Tips. Applied Colleges. IBPS RRB 2017 Result to be declared by October 10, 2017.