Is Humanitarian Design the New Imperialism? Emily Pilloton's Design Revolution Road Show, the physical embodiment of her non-profit Project H Design rolled into New York a few weeks ago stopping at Metropolis, the Cooper Hewitt National Design Museum and ICFF. Yes, Project H is hot in U.S. and European design circles, almost as sizzling as IDEO, the Acumen Fund, and One Laptop Per Child. And why not? Emily’s Project H is a pure play in using design to do good. It doesn’t get better than this mission statement: Project H Design connects the power of design to the people who need it most, and the places where it can make a real and lasting difference. So do I. One of Project H's initiatives was to redesign the Hippo Roller, a water transportation device Let me explain.

But not to the mostly Asian designer audience. Naw. Then, some months later at Parsons School for Design, the same thing happened. Might Indian, Brazilian and African designers have important design lessons to teach Western designers? So what’s going on? Are Humanitarian Designers Imperialists? Project H Responds. While sitting in the parking lot of a BoJangles restaurant at 11 o'clock at night, I opened the link to Bruce Nussbaum's recently published "Is Humanitarian Design the New Imperialism? 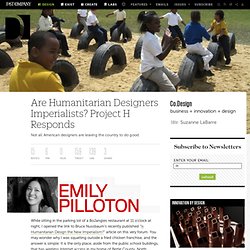 " article on this very forum. You may wonder why I was squatting outside a fried chicken franchise, and the answer is simple: It is the only place, aside from the public school buildings, that has wireless Internet access in my home of Bertie County, North Carolina. Bertie County, North Carolina. 27 people per square mile, 1 in 3 children living below the poverty line Daily problems found in such rural communities, including the lack of connectedness and access to technology, have become very real and very personal to me in recent months.

As I began reading Mr. Rural Bertie County's main crops are peanuts, cotton, and tobacco I can articulate such disdain for the approach, because Project H has been there. Computer lab built for the Bertie County School District. Design Imperialism - no ideas but in things. I’ve been thinking about this issue for a long time, and there happens to be an ongoing discussion that I just tapped into that I want to point people towards, in case they’re interested. 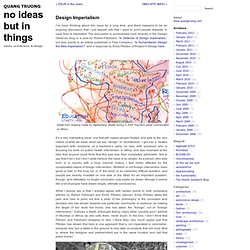 The discussion is summarized most recently in the Design Observer blog in a post by Robert Fabricant, “In Defense of Design Imperialism,” but also points to an article published in Fast Company: “Is Humanitarian Design the New Imperialism?” And a response by Emily Pilloton of Project H Design here. Detail from drawing made by Alphachimp Studio during a 2005 PopTech panel conversation on Africa It’s a very interesting issue, one that still makes people heated, and gets to the very nature of what we mean when we say “design” or “architecture.” I got into a heated argument with someone, at a bachelor’s party, no less, with someone who is focusing his work on public health intervention in Africa, and was incensed at the idea that anyone could think that this was less than completely admirable. Humanitarian Design vs. Design Imperialism: Debate Summary. Miscellaneous The Editors Bruce Nussbaum started a firestorm with the question "Is humanitarian design the new imperialism? 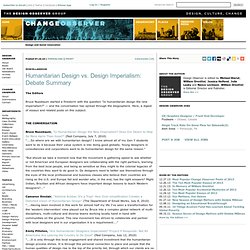 " — and the conversation has spread through the blogosphere. Here, a digest of essays and related posts on this subject. Bruce Nussbaum, "Is Humanitarian Design the New Imperialism? "But should we take a moment now that the movement is gathering speed to ask whether or not American and European designers are collaborating with the right partners, learning from the best local people, and being as sensitive as they might to the colonial legacies of the countries they want to do good in. Cameron Sinclair, "'Admiral Ackbar, It's a Trap!

I enjoyed going to the recent Pop! 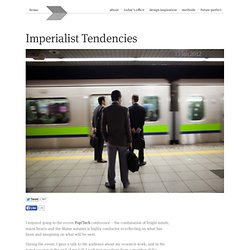 Tech conference – the combination of bright minds, warm hearts and the Maine autumn is highly conducive to reflecting on what has been and imagining on what will be next. During the event, I gave a talk to the audience about my research work, and in the panel session at the end of my talk I took two questions from a member of the audience relating to personal motivations of doing this kind of research and whether anyone has the moral right to extract knowledge from a community for corporate gain.

Given the asker’s frustrated-politeness I’ll paraphrase what I (and a bunch of folks that came up to me after the talk) took as the intent of his questions: Short answer is that I sleep just fine*. Those with a desire to go beyond the 110 character headlines should draw a fresh mug of their favourite brew, find a comfy armchair and read on. Download the related Pop! Before delving into a response some context here’s some context: my Pop!