Untitled. One simple answer is that convenience isn’t as important as often assumed. 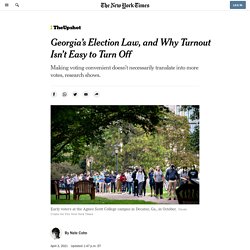 Almost everyone who cares enough to vote will brave the inconveniences of in-person voting to do so, whether that’s because the inconveniences aren’t really so great, or because they care enough to suffer them. Antonio French: New election system, low turnout harmed Black voter influence. Twitter. Untitled. Women officially won the right to vote just a few months before the 1920 presidential election, and as soon as the 19th Amendment was ratified, suffragists were predicting a sea change in American politics. 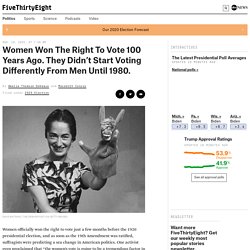 One activist even proclaimed that “the women’s vote is going to be a tremendous factor in this election.” And that did happen, eventually. In the century since women’s suffrage, women have transformed our politics — in particular, they’ve become a force to be reckoned with inside the Democratic Party. Of course, many women — especially white women — still vote Republican, but in election after election, it is the Democratic Party that has added more women to its ranks. Untitled. Older Americans are widely considered the backbone of American elections. 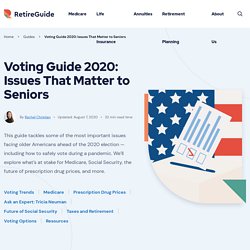 According to U.S. Census Bureau data, nearly 71 percent of voters age 65 and older cast a ballot in the 2016 presidential election, compared to just 46 percent of younger voters age 18 to 29. When the number of voting-eligible citizens increased by nearly 9 million people between 2012 and 2016, almost 6 million of them — about two-thirds — were over 65. In short: Seniors turn out to vote. Experts say this leads many candidates to focus on key issues such as Medicare, prescription drug prices and Social Security benefits during election years.

“If past predicts the future, older voters will continue to play an outsized role in the coming election,” Tricia Neuman, executive director of the Kaiser Family Foundation’s Program on Medicare Policy, told RetireGuide.com. Ask an Expert Tricia Neuman Medicare policy expert Tricia Neuman of the Kaiser Family Foundation answers common questions about drug costs and Medicare. Tip. Untitled. New York’s Legislature is meeting virtually, for the most part, this week, tackling unfinished business amid the coronavirus pandemic that has wreaked havoc on the state’s health and its finances. 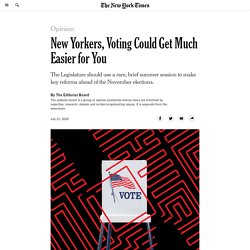 Given what New York and other hard-hit states are up against, the Legislature has its work cut out for it. 'Things could get very ugly': Experts fear post-election crisis as Trump sets the stage to dispute the results in November. Interviews with nearly 20 election experts, former lawmakers, political strategists, legal scholars and historians indicate there are widespread fears of a nightmare scenario in November, where Trump's norm-breaking behavior -- coupled with the unprecedented challenges of pandemic-era voting -- test the limits of American democracy and plunge the country into a constitutional crisis. 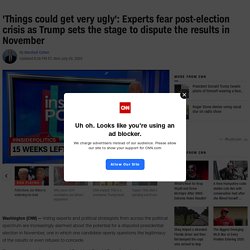 "There's a significant scope for an unprecedented post-election crisis in this country," said Larry Diamond, an expert on democratic institutions at the conservative-leaning Hoover Institution. More Americans than ever are expected to cast mail-in ballots this year, so it will take longer for results to trickle in. Experts are eschewing "election night" for "election week," because it could realistically take days, and maybe weeks, until news outlets project a winner.

Both presidential campaigns have set aside millions of dollars and recruited lawyers for the looming legal fights. Delayed results in November. Untitled. If the presidential election is close, chaos is likely to result. 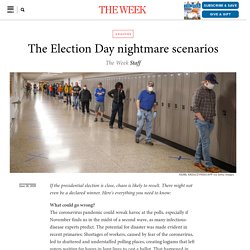 A world away from Washington, loyal supporters stand by the President in Trump country. "I think his personality is hard to deal with, his way of handling people is difficult," said Karen Deeter, a Florida retiree who moved here from Illinois. 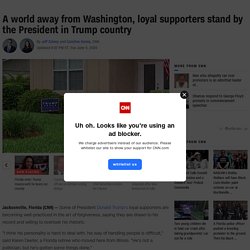 Untitled. Untitled. Oregon has conducted all of its statewide elections entirely by mail since 1998. 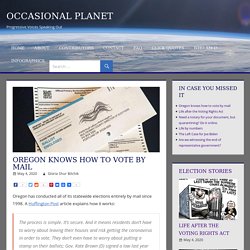 Untitled. The coronavirus pandemic has changed voting behavior and poses an extraordinary challenge to state and local officials as they seek to ensure that elections in 2020 are fair, safe, and secure. 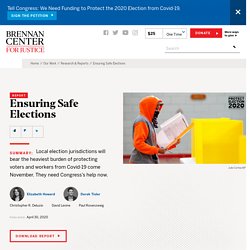 As national policymakers consider how people should vote in light of the pandemic, elections themselves have already changed. Millions of voters are requesting mail ballots, far more than would have been the case otherwise. Untitled. As with most aspects of our daily lives, the coronavirus pandemic has disrupted the administration of elections. 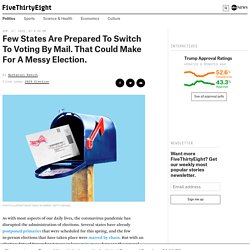 The coronavirus disease 2019 (Covid-19) presents a difficult and novel challenge to the administration of the 2020 general election. Recent election emergencies have largely been caused by catastrophic weather events, and our country has done little election planning for pandemics. Unlike a hurricane, a pandemic does not have a discrete and relatively predictable end point. And avoiding large-scale social contact is a central feature of combating the crisis.