Untitled. Mitch McConnell ‘refusing to debate his election rival if there is a female moderator’ Senate majority leader Mitch McConnell and his challenger in the Kentucky Senate race, Amy McGrath, are sparring over upcoming debates. 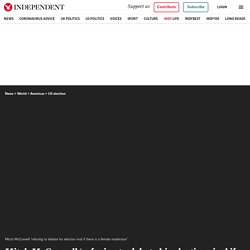 It all started when Mr McConnell sent a press release from "Team Mitch" accusing his opponent of potentially backing out of a debate in October. But according to subsequent claims from Ms McGrath's campaign, the real issue is the senator’s refusal to participate in an event with a female moderator. Untitled. Welcome to FiveThirtyEight’s weekly politics chat. 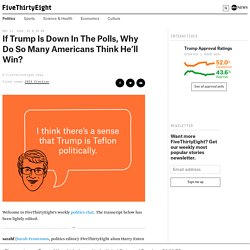 The transcript below has been lightly edited. sarahf (Sarah Frostenson, politics editor): FiveThirtyEight alum Harry Enten found that former Vice President Joe Biden’s average lead of 6 percentage points over President Trump is the steadiest lead in a race with an incumbent running since at least 1944. Trump’s Electoral College Edge Could Grow in 2020, Rewarding Polarizing Campaign. President Trump’s approval ratings are under water in national polls. 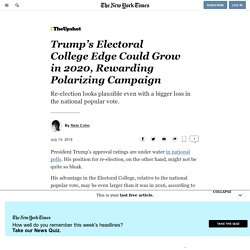 His position for re-election, on the other hand, might not be quite so bleak. His advantage in the Electoral College, relative to the national popular vote, may be even larger than it was in 2016, according to an Upshot analysis of election results and polling data. That persistent edge leaves him closer to re-election than one would think based on national polls, and it might blunt any electoral cost of actions like his recent tweets attacking four minority congresswomen. For now, the mostly white working-class Rust Belt states, decisive in the 2016 election, remain at the center of the electoral map, based on our estimates. The Democrats have few obviously promising alternative paths to win without these battleground states. The president’s views on immigration and trade play relatively well in the Northern battlegrounds, including among the pivotal Obama-Trump voters. 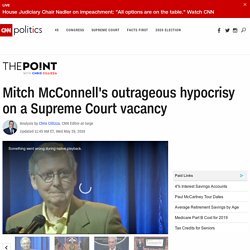 Here's what happened next, according to CNN's Ted Barrett: "The leader took a long sip of what appeared to be iced tea before announcing with a smile, 'Oh, we'd fill it,' triggering loud laughter from the audience. " That is a "wow. " It's a "wow" because McConnell, back in 2016, refused to even meet with Merrick Garland, who was then-President Barack Obama's nominee to replace the late Antonin Scalia on the Supreme Court. Even though Scalia had died in February 2016, McConnell argued that an outgoing president -- even one with 11 months left in office -- couldn't make a court pick due to its lifetime tenure.

2018 election voter turnout: the record-setting numbers, in one chart. Voter turnout in 2018 appears to have reached the highest level of any midterm election in a century. 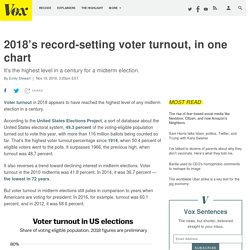 According to the United States Elections Project, a sort of database about the United States electoral system, 49.3 percent of the voting-eligible population turned out to vote this year, with more than 116 million ballots being counted so far. That’s the highest voter turnout percentage since 1914, when 50.4 percent of eligible voters went to the polls. It surpasses 1966, the previous high, when turnout was 48.7 percent. It also reverses a trend toward declining interest in midterm elections. Voter turnout in the 2010 midterms was 41.8 percent. Joe Biden parody website is beating official campaign site on Google. SI.com. Kamala Harris Is Dreaming Big. IT’S A COLD JANUARY NIGHT in D.C., and I’m at the Hart Senate Office Building, trailing U.S. 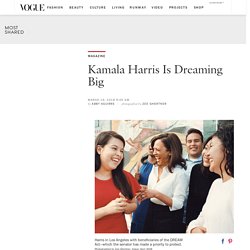 Senator Kamala Harris into a conference room. Inside, a group of young Latino congressional staffers has gathered to meet the Democratic star from California. When she enters, flanked by aides, and dressed in a navy suit, matching ruffled blouse, black pearls, and stilettos that give her petite five-feet-four frame a few extra inches of height, the staffers immediately rise from their chairs. Harris has an air of celebrity that, under normal circumstances, a freshman senator wouldn’t have had time to acquire. But this year has been anything but normal. The startled staffer springs to his feet.

“What’s your last name?” “Figueroa.” “Thank you!” Harris is a courtroom litigator. Tonight is the State of the Union. Thehill. What Is Kirsten Gillibrand Up To? During her decade in national politics, Sen. 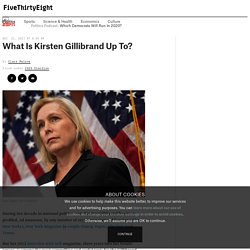 Kirsten Gillibrand has been profiled, ad nauseam, by any number of very important publications: The New Yorker, New York Magazine (a couple times), Vogue, The New York Times. But her 2012 interview with Self magazine, three years into her Senate tenure, is among the most compelling and useful texts for the Gillibrand close-reader. In a span of 599 words, the senator manages to ruminate on fitness tips (her 40-pound postpartum weight loss being the ostensible reason for the story), touch on the difficulties of being a working mother, name-drop several across-the-aisle friendships, and plug, in the most deft of humblebrags, her tireless spirit: “I approached losing weight the same way I’ve approached any other challenge throughout my life: I figured out exactly what I needed to do to succeed and dove in. I was determined.” No one was off the table, including — or perhaps especially — political patrons. The top 15 Democratic presidential candidates for 2020, ranked.