Donald Trump Had A Superior Electoral College Strategy. This is the sixth article in a series that reviews news coverage of the 2016 general election, explores how Donald Trump won and why his chances were underrated by the most of the American media. 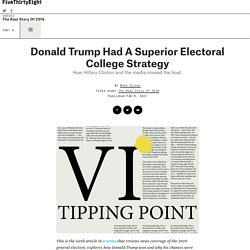 By one measure, Wisconsin was the most important state in the nation in November. According to FiveThirtyEight’s tipping-point calculation, it was the state that put Donald Trump over the top to 270 electoral votes and the White House. (Or at least arguably it did: Pennsylvania has a competing tipping-point claim.) So here’s an interesting question: How many times did Hillary Clinton visit Wisconsin during the general election? What will it take for Democrats to woo the white working class? Democrats from President Obama on down are blaming their 2016 debacle in part on too much “identity politics” — messaging aimed not at voters broadly, but at Latinos, women, African Americans and the LGBT community as groups. 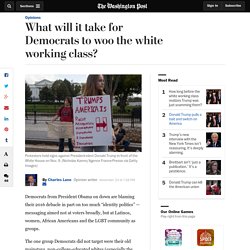 Autocracy: Rules for Survival. Democrats try to pick up the pieces. But Democrats are embarking on a soul-searching exercise to determine how they ended up in the political wilderness, losing the House, the Senate and the White House at a time when President Barack Obama's approval ratings are at record highs. 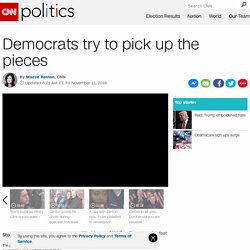 Hillary Clinton may very well still win the popular vote, and there are myriad theories about why Democrats fell short when it came to electoral college math: inaccurate polling and modeling, an unprecedented surge of white voters for Trump, Clinton's failure to ignite enough enthusiasm and excitement among women, blacks and Latinos. The Voting Habits of Americans Like You. What Trump, Hillary Clinton, Bernie Were Doing in Their 30s. What do Hillary Clinton, Bernie Sanders, Donald Trump, Ted Cruz, Marco Rubio, and John Kasich have in common? 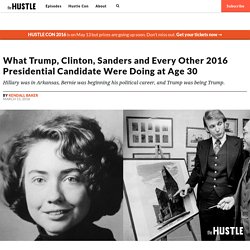 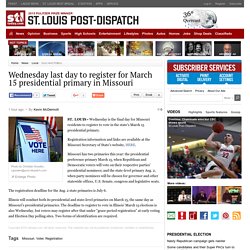 LOUIS • Wednesday is the final day for Missouri residents to register to vote in the state's March 15 presidential primary. Registration information and links are available at the Missouri Secretary of State's website, HERE. Missouri has two primaries this year: the presidential preference primary March 15, when Republican and Democratic voters will vote on their respective parties' presidential nominees; and the state-level primary Aug. 2, when party nominees will be chosen for governor and other statewide offices, U.S.

Senate, congress and legislative seats. National Popular Vote - destroying the Electoral College. Introduction: What It Is - Why It's Needed. Dispute Over Voter Data Leaves Some Missouri Democrats Frustrated. Click to enlarge. 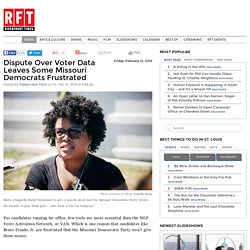 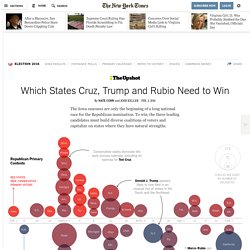 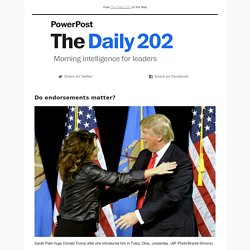 (AP Photo/Brandi Simons) — Sarah Palin’s endorsement of Donald Trump underscores something remarkable: Neither Trump nor Ted Cruz, the two Republicans leading in the polls, has the endorsement of a single sitting governor or senator. “It is staggering that Trump does not have a major elected official or any statewide elected officeholder anywhere in the country supporting him,” said former New Hampshire GOP chairman Fergus Cullen, who has not endorsed anyone. “People who actually win elections recognize he’d be a train wreck … but his supporters love that. And Cruz wears the lack of a single endorsement from a Senate colleague as a badge of honor.” — On the Democratic side, the entire political establishment of New Hampshire publicly lined up behind Hillary Clinton – including Gov. The angriest and most pessimistic people in America aren’t the hipster protesters who flitted in and out of Occupy Wall Street. 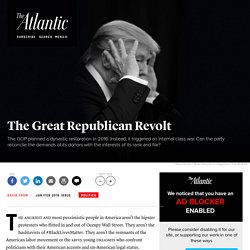 They aren’t the hashtavists of #BlackLivesMatter. They aren’t the remnants of the American labor movement or the savvy young dreamers who confront politicians with their American accents and un-American legal status. The angriest and most pessimistic people in America are the people we used to call Middle Americans. All Politicians Lie. Some Lie More Than Others.

Washington — I’m a political fact-checker, which is usually an automatic conversation starter at parties. What politics look like through 14-year-old eyes. You might not realize it or you might be unwilling to accept it, but the millennials are yesterday's news. 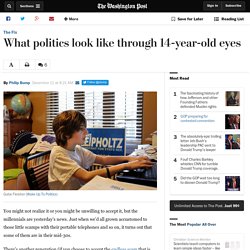 Just when we'd all grown accustomed to those little scamps with their portable telephones and so on, it turns out that some of them are in their mid-30s. There's another generation (if you choose to accept the endless scam that is generational differentiation) that's younger and more Internet-y and more hopeful and more of everything we'd just finally come to terms with about the millennials. And it is a generation without a name. The White House tried to call it the "Homeland Generation," since they appeared shortly after 9/11, which is kind of suspicious. Lindsey Graham: 'Tell Donald Trump to go to hell' "You know how you make America great again? Tell Donald Trump to go to hell," Graham said on CNN's "New Day" on Tuesday, picking up on the GOP front-runner's famous slogan, "make America great again. " The South Carolina Republican was responding to Trump's statement released Monday calling for the U.S. to ban all Muslims from entering the country.

Do accuracy and truth still matter on the campaign trail? Untitled. Seattle Voters Approve First-in-the-Nation 'Democracy Vouchers' Voters in Seattle, Washington on Tuesday approved a first-in-the-nation "democracy voucher" ballot initiative that could serve as a national model on campaign finance reform. Initiative 122 (I-122), which was endorsed by nearly every Seattle City Council candidate and enjoyed the support of dozens of local and national progressive groups, passed 60-40, according to the King County Elections Office. Supporters say the innovative public campaign financing program could give everyday voters more control over the city's elections while limiting the power of corporate and special interests.

The initiative states that for each city election cycle, or every two years, the Seattle Ethics and Elections Commission (SEEC) will mail four $25 vouchers to each voter. They can only be used in Seattle campaigns for mayor, city council and city attorney. Last year, Seattle's City Council passed a historic measure establishing a $15 minimum wage. Untitled. How Google Could Rig the 2016 Election - Robert Epstein. America’s next president could be eased into office not just by TV ads or speeches, but by Google’s secret decisions, and no one—except for me and perhaps a few other obscure researchers—would know how this was accomplished. Research I have been directing in recent years suggests that Google, Inc., has amassed far more power to control elections—indeed, to control a wide variety of opinions and beliefs—than any company in history has ever had. Google’s search algorithm can easily shift the voting preferences of undecided voters by 20 percent or more—up to 80 percent in some demographic groups—with virtually no one knowing they are being manipulated, according to experiments I conducted recently with Ronald E.

Scott Walker, Texas Sen. Ted Cruz and former Hewlett Packard chief executive Carly Fiorina -- who were given entrée to potential backers at the luxurious gathering. Koch calls for unity against 'corporate welfare' - CNNPolitics.com. Can the president and the vice president be from the same state? Check out this letter then-Governor Jeb Bush wrote to the swiftboaters in 2005. Oliver Willis dug up a letter Jeb Bush wrote to the men who orchestrated the smear campaign against then-presidential candidate John Kerry. Bernie Sanders on guns: Vermont independent voted against gun control, for PLCAA. Photo by Andrew Burton/Getty Images. Donald Trump: Progressive champion? The Senate Votes That Divided Hillary Clinton and Bernie Sanders. Hillary Rodham Clinton is a liberal Democrat on domestic matters, and Bernie Sanders is a socialist. Connecting the Dots Behind the 2016 Candidates.