Renters. In buildings financed by HFA, all or a portion of the rental apartment units are set aside for people with lower incomes. 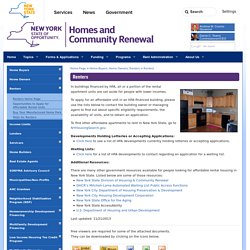 To apply for an affordable unit in an HFA-financed building, please use the lists below to contact the building owner or managing agent to find out about specific eligibility requirements, the availability of units, and to obtain an application. To find other affordable apartments to rent in New York State, go to NYHousingSearch.gov. Developments Holding Lotteries or Accepting Applications: Click here to see a list of HFA developments currently holding lotteries or accepting applications. Waiting Lists: Click here for a list of HFA developments to contact regarding an application for a waiting list. Additional Resources: There are many other government resources available for people looking for affordable rental housing in New York State.

The Official Site of Dr. Karen Thornton - New York City. One to one Spanish lessons via Skype: SpanishSkype.org. André Balazs. André Tomes Balazs (born January 31, 1957) is the President and CEO of André Balazs Properties that includes a portfolio of hotels across the United States and residences in New York, especially in New York City. 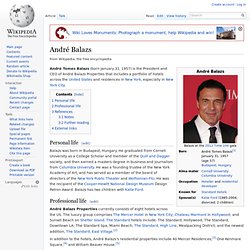 Personal life[edit] Professional life[edit] In addition to the hotels, André Balazs’s residential properties include 40 Mercer Residences,[3] One Kenmare Square,[4] and William Beaver House.[5] In his early years, Balazs worked at Biomatrix, a New Jersey based bio-tech company founded by his father. In 1990, he purchased Chateau Marmont, subsequently launching his career as an hotelier. In 1997, Balazs opened Sunset Beach, a luxury boutique hotel and restaurant, open seasonally and located on Shelter Island in New York. In 1998, Balazs expanded his hotel collection when he purchased and restored The Mercer hotel in downtown New York.[8] Designed by French designer Christian Liaigre, The Mercer offers 75 guest rooms on six floors of a Romanesque revival building. References[edit]

Meal Calendar for New Parents, Surgery, Illness, and More. 40 free things to do in New York City. Seeing the bulk of New York City's biggest attractions can mean spending a hefty chunk of a trip's budget on tickets. 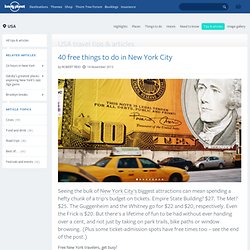 Empire State Building? $27. The Met? $25. Chez Panisse Restaurant. The Amistad Center for Art & Culture. Balloon Lift. Balloon Lift with Lighter than Air Gases It has long been known that if immersed in a gas or liquid, an object will displace a volume of that gas or liquid equivalent to its own volume. 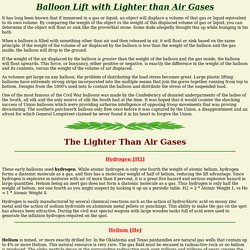 Www.advancedspecialtygases.com/Dowloadable Files/New_MSDS/NEON_ASG.pdf. Helium Tank Rentals. Safety warning: All helium tank cylinders need to be secured; this is the renter's responsibility. 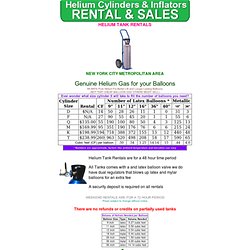 Helium is a non-toxic, non-flammable gas, however it is dangerous to breathe in the gas from the cylinder, or even from an inflated balloon. We recommend that you transport the helium tank cylinder in the trunk of your car. If you must transport it in the passenger compartment, make sure it is secured and you have at least one window open at all times Delivery Information Delivery of our helium tanks are available at a nominal fee. Delivery and pick-up will be made to ground level, to easily accessible buildings and yards. Take charge of your own life! TSNY New York - Class Schedule and Prices. Classes at TSNY Advance reservations are recommended & are subject to a one-time $22.00 registration fee. 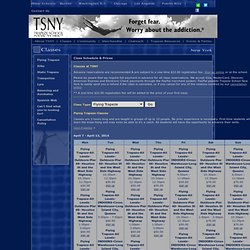 Sign up online or at the school. Please be aware that we require full payment in advance for all class reservations. We accept Visa, MasterCard, Discover, American Express and Electronic Check payments through the PayPal merchant system. PayPal permits Trapeze School New York to easily send you a refund if the class is cancelled, or if you cancel for any of the reasons covered by our cancellation policy. ** A one-time $22.00 registration fee will be added to the price of your first class. Flying Trapeze Classes Classes are 2 hours long and are taught in groups of up to 10 people. 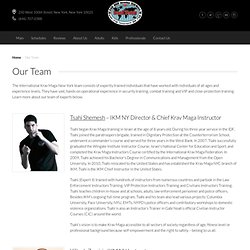 During his three year service in the IDF, Tsahi joined the paratroopers brigade, trained in Dignitary Protection at the Counterterrorism School, underwent a commander’s course and served for three years in the West Bank. In 2007, Tsahi successfully graduated the Wingate Institute Instructor Course; Israel’s National Center for Education and Sport, and completed the Krav Maga Instructors Course certified by the International Krav Maga Federation. In 2009, Tsahi achieved his Bachelor’s Degree in Communications and Management from the Open University. In 2010, Tsahi relocated to the United States and has established the Krav Maga NYC branch of IKM. Tsahi (Expert II) trained with hundreds of instructors from numerous countries and partook in the Law Enforcement Instructors Training, VIP Protection Instructors Training and Civilians Instructors Training.