Everything You Need To Know About Detroit’s Bankruptcy Settlement. Cookies are Not Accepted - New York Times. Detroit retirees and workers approve bankruptcy plan, agree to pension cuts. DETROIT, MI -- The city's employees and retirees have voted in favor of a bankruptcy plan that includes pension cuts to help reduce Detroit's debt by some $7 billion. 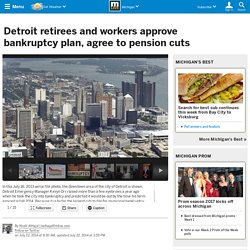 In a vote that took place over two months, about 82 percent of retirees and active workers in the Police & Fire Retirement System who submitted ballots voted in favor of the plan, while about 73 percent of General Retiree System voters said "yes," according to the city. "The voting shows strong support for the City's plan to adjust its debts and for the investment necessary to provide essential services and put Detroit on secure financial footing," said Detroit Emergency Manager Kevyn Orr in a statement issued late Monday night.

Michigan Attorney General Bill Schuette last year said he would fight attempts to cut pensions, citing protections in the Michigan Constitution. But he said Monday night that he would respect the vote. If U.S. But there will be other challenges. Detroit financial crisis. The city of Detroit has filed for Chapter 9 federal bankruptcy protection making it the largest city in U.S. history to declare bankruptcy. 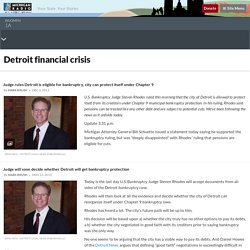 We are updating this post as we learn more information. To see how the story unfolded scroll down and read up. Final update on this post - 3:08 p.m. And here we go - the beginning of a long line of likely court battles after the city of Detroit attempts to move through federal bankruptcy protection. Today, Ingham County judge Rosemary Aquilina issued orders saying Detroit's bankruptcy filing violates the state constitution. In a spate of orders today arising from three separate lawsuits, Aquilina said Gov. State Attorney General Bill Schuette moved quickly and said he will appeal the judge's decision. 11:22 a.m.

Detroit Emergency Manager Kevyn Orr and Gov. "Going forward...we will pay our bills," Orr said. Orr said that "bankruptcy is a tool in our toolbox" and the process gives him a chance to implement a plan that he laid out on June 14. For Detroit, a Crisis Born of Bad Decisions and False Hope. Timeline Of Detroit’s Financial Crisis. DETROIT (AP) — A timeline of Detroit’s financial troubles: — Detroit issues $1.44 billion of new debt in the form of pension obligation certificates to fund the city’s two retirement systems. 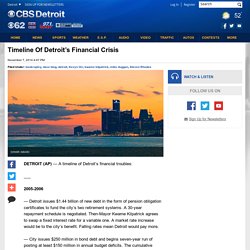 A 30-year repayment schedule is negotiated. Then-Mayor Kwame Kilpatrick agrees to swap a fixed interest rate for a variable one. A market rate increase would be to the city’s benefit. Falling rates mean Detroit would pay more. — City issues $250 million in bond debt and begins seven-year run of posting at least $150 million in annual budget deficits. . — Interest rates begin to fall during national recession. — Due to falling interest rates, Detroit is required to pay an additional $1.14 billion in interest and hedging derivatives as part of the certificate of participation and swaps agreements.