'Scared for my life': Why are crime victims being jailed? Image copyright Getty. 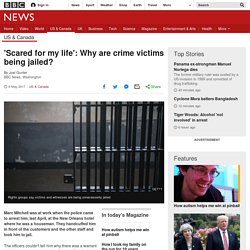 Fascism: A Slate Academy. With Rebecca Onion, June Thomas, and Joshua Keating Ever since Donald Trump emerged as a serious contender for the Republican nomination last year, opponents have leaned on the term fascist to describe him. 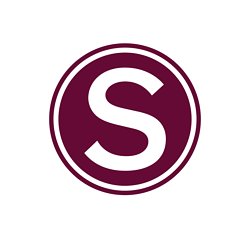 But what does that toxic word really mean? Join Slate staffers Rebecca Onion, June Thomas, and Joshua Keating for a Slate Academy that travels back in history to find out what fascism looked like in the 20th century, then uses that knowledge to examine America and the world in 2017. Follow along with book excerpts, links, and primary sources, as your Slate hosts read about the history of fascism in six countries, then interview historians and archivists who help shed light on what we’ve learned. 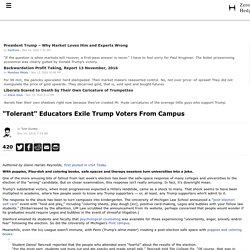 One of the more amusing bits of fallout from last week’s election has been the safe-space response of many colleges and universities to the election of the “wrong” candidate. But on closer examination, this response isn’t really amusing. In fact, it’s downright mean. Trump’s substantial victory, when most progressives expected a Hillary landslide, came as a shock to many.

The Urge to Splurge. Through good times and bad, regardless of what’s actually happening in the world, one thing is certain: in the long run, the Pentagon budget won’t go down. 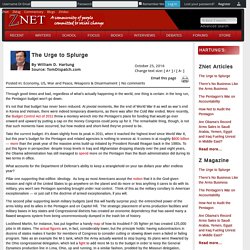 It’s not that that budget has never been reduced. At pivotal moments, like the end of World War II as well as war’s end in Korea and Vietnam, there were indeed temporary downturns, as there was after the Cold War ended. More recently, the Budget Control Act of 2011 threw a monkey wrench into the Pentagon’s plans for funding that would go ever onward and upward by putting a cap on the money Congress could pony up for it. The remarkable thing, though, is not that such moments have occurred, but how modest and short-lived they’ve proved to be. Take the current budget. Congressional Scorecard - Freedom First Society. The Freedom First Society “Congressional Scorecard” is designed to help Americans force Congress to return the federal government to its constitutional limits. 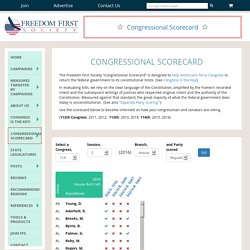 (See Congress Is the Key!) In evaluating bills, we rely on the clear language of the Constitution, amplified by the framers’ recorded intent and the subsequent writings of justices who respected original intent and the authority of the Constitution. Measured against that standard, the great majority of what the federal government does today is unconstitutional. (See also “Separate Party Scoring.”) Calm Down, for Christ's Sake. So we live in a country (and a world, for that matter) populated by a horrifyingly high proportion of hysterics. 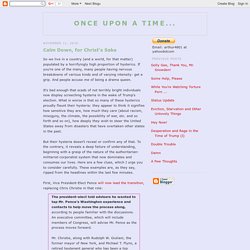 America is more fragile than you think: A Marine Corps officer on why voters must defeat Donald Trump — Quartz. When I came back from Iraq the second time, I had trouble driving. 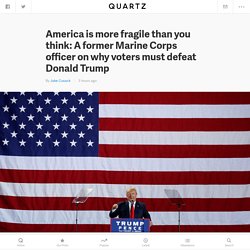 My tours as a Marine had shown me how easily metal could tear through flesh. Now I was acutely aware that life is precarious. "Nothing Good Can Come Of This Election" ...And That's Good. Submitted by Charles Hugh-Smith via OfTwoMinds blog, We the citizens and voters have to stop being enablers of systemic corruption. 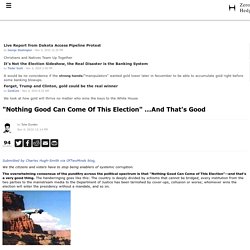 The overwhelming consensus of the punditry across the political spectrum is that "Nothing Good Can Come of This Election"--and that's a very good thing. The handwringing goes like this: The country is deeply divided by schisms that cannot be bridged, every institution from the two parties to the mainstream media to the Department of Justice has been tarnished by cover-ups, collusion or worse; whomever wins the election will enter the presidency without a mandate, and so on. The Imperial President's Toolbox Of Terror: A Dictatorship Waiting To Happen. Submitted by John Whitehead via The Rutherford Institute, Presidents don’t give up power. 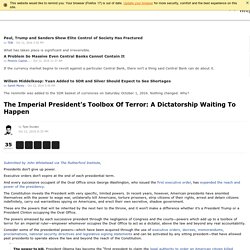 Executive orders don’t expire at the end of each presidential term. And every successive occupant of the Oval Office since George Washington, who issued the first executive order, has expanded the reach and power of the presidency. The Constitution invests the President with very specific, limited powers. In recent years, however, American presidents have anointed themselves with the power to wage war, unilaterally kill Americans, torture prisoners, strip citizens of their rights, arrest and detain citizens indefinitely, carry out warrantless spying on Americans, and erect their own secretive, shadow government. 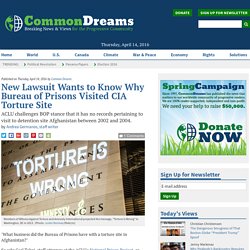 " So asks Carl Takei, staff attorney at the ACLU's National Prison Project, as his organization on Thursday filed suit against the federal Bureau of Prisons (BOP) over documents related to a visit to a CIA detention site code named COBALT. The ACLU had sought, under a Freedom of Information Act request, records of BOP visits to and involvement with the torture site, but the human rights and civil liberties organization's request was denied, with the BOP saying no such records could be found. That's highly unlikely, ACLU says. There Were Ten Mass Shootings in America This Week. VICE is tracking mass shootings in America in 2016, and comparing the numbers with their European counterparts. Read our rationale for the project and the metrics we're using here.

Over the past seven days, America endured ten mass shootings that left at least 17 dead and 33 injured. These attacks bring the US mass shooting toll thus far in 2016 to 91 dead and 284 injured in 78 incidents. Data.gov. The American Presidency Project. U.S. Electoral College. A Small Minority in 10 States Will Elect the Next President. When Richard Nixon ran for president in 1960, he vowed to visit and campaign in all 50 states. The strain of that effort, particularly in an era of slower air travel, exhausted Nixon and was in part responsible for his poor appearance — and performance — in the crucial first TV debate with JFK.

Today, with so many states falling into the solidly blue or solidly red column, there are only 10 states that are realistically in play. Not surprisingly, these “purple” states get the most attention in a presidential race. In fact, throughout the 2012 election cycle, President Barack Obama and GOP nominee Mitt Romney campaigned in only 12 states. Thirty-eight states, from New York to California, had not a single campaign visit after the nominating conventions. FBI Whistleblower Wrongfully Fired For Reporting Sex Trips. A federal appeals court ruled in late February that an FBI whistleblower, who reported fraud and sexual misconduct involving prostitutes, was wrongfully terminated in October 2010.

Lieutenant Colonel John C. Parkinson worked as a special agent in the FBI as part of a Special Operations Group ground team. An Examination of Trust in Contemporary American Society. Will the Republican Party Survive the 2016 Election? The angriest and most pessimistic people in America aren’t the hipster protesters who flitted in and out of Occupy Wall Street. They aren’t the hashtavists of #BlackLivesMatter. They aren’t the remnants of the American labor movement or the savvy young dreamers who confront politicians with their American accents and un-American legal status. Operation Northwoods. Operation Northwoods memorandum (13 March 1962)[1] Operation Northwoods was a series of false flag proposals that originated within the Department of Defense (DoD) and the Joint Chiefs of Staff (JCS) of the United States government in 1962.

The proposals, which called for the Central Intelligence Agency (CIA), or other operatives, to commit acts of terrorism in US cities and elsewhere, were rejected by the Kennedy administration.[2] At the time of the proposal, Cuba had recently become communist under Fidel Castro. The operation proposed creating public support for a war against Cuba by blaming it for terrorist acts.[3] To this end, Operation Northwoods proposals recommended hijackings and bombings followed by the introduction of phony evidence that would implicate the Cuban government. What are the core differences between Republicans and Democrats? - Marginal REVOLUTION. Those Demanding Free Speech Limits to Fight ISIS Pose a Greater Threat to U.S. Than ISIS.

In 2006 — years before ISIS replaced al Qaeda as the New and Unprecedentedly Evil Villain — Newt Gingrich gave a speech in New Hampshire in which, as he put it afterward, he “called for a serious debate about the First Amendment and how terrorists are abusing our rights — using them as they once used passenger jets — to threaten and kill Americans.” Propaganda and Disinformation: How the CIA Manufactures History. A Second Snowden Has Leaked a Mother Lode of Drone Docs. It’s been just over two years since Edward Snowden leaked a massive trove of NSA documents, and more than five since Chelsea Manning gave WikiLeaks a megacache of military and diplomatic secrets. The Analyst Report – Top NSA Whistleblower: “Every Time There Is a Terrorist Attack”, We Should “CUT the Budgets of All the Intelligence Agencies” By Washington’s Blog: 3 December, 2015 The highest-level NSA whistleblower in history – William Binney – who was the executive who created the agency’s mass surveillance program for digital information, is widely regarded as a “legend” within the agency, who served as the senior technical director within the agency, and managed thousands of NSA employees – has a great suggestion for motivating U.S. intelligence agencies to prevent terrorism.

Civics flip book. Organizing for Action / Climate Change. Fact-checking the Republican Fox Network Debate. Updated Thursday, Nov. 12, 2015, at 4:25 p.m. The Republican presidential candidates debated serious public policy on the economy, taxes and immigration on Tuesday night, steering away from personal attacks that defined earlier matchups. The Paranoid Style in American Politics. Article — From the November 1964 issue. Republicans’ Climate Change Denial Denial. What Silicon Valley Really Thinks About Politics, An Attempted Measurement — The Ferenstein Wire. How do Founders’ core values differ from traditional Democrats and Libertarians? The Ugly History Behind ‘Religious Freedom’ Laws - Washington Spectator. From Ava Duvernay’s award-winning film to President Barack Obama’s speech at the Edmund Pettus Bridge, to the thousands we crossed the bridge with and the millions that joined by television, America has remembered Selma, Alabama, this year.

*Read: Deep Politics and the Death of JFK, by Peter Dale Scott

HAARP Video Documentary. CIA Mind Control Techniques MK-ULTRA Program Brainwashing. Rule from the Shadows - The Psychology of Power - Part 1. A psychological history of the NSA. Tales from the Crypto Community. The NSA's Secret Role in the U.S. Assassination Program. The Worldwide Network of US Military Bases.

The U.S. Supreme Court Is Marching in Lockstep with the Police State. Supreme Court: Justices give police more leeway in home searches.