Your Brain Has A "Delete" Button. Will wearing a ratty college T-shirt and sweats to bed soon go out of fashion?

The pajamas industry is growing, and retailers aren't sleeping on how to reinvent the bygone ensemble. What was once a symbol of buttoned-down '50s attire (think Ricky and Lucy in collared PJ sets, tucking into their separate beds) has slowly inched its way back into pop culture. Look no further than popular TV shows—New Girl, House of Cards, or Scandal—to see protagonists clad in chic silk or cotton designs reminiscent of a tidier bedtime era.

"The way we do things" The art of doing one thing at a time – A Life of Productivity. Takeaway: Doing just one thing at a time helps you remember more, get more done in less time, distress, bring more attention to your work, and work smarter, instead of just harder. 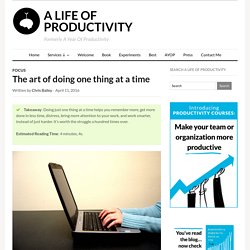 It’s worth the struggle a hundred times over. Estimated Reading Time: 4 minutes, 4s. Over the next couple weeks, I’ve been adapting a few of my favorite ideas from The Productivity Project and posting about them on ALOP! Don’t worry if you’re in the middle of reading the book—they won’t spoil much, and I’ve taken out a few of the weird stories, interviews, and anecdotes :-) Enjoy!

Philo. (6) For as the smallest seal receives imitations of things of colossal magnitude when engraved upon it, so perchance in some instances the exceeding beauty of the description of the creation of the world as recorded in the Law, overshadowing with its brilliancy the souls of those who happen to meet with it, will be delivered to a more concise record after these facts have been first premised which it would be improper to pass over in silence. 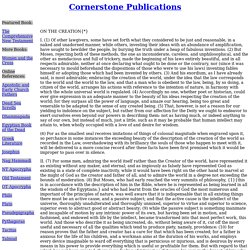 IV. V. (20) As therefore the city, when previously shadowed out in the mind of the man of architectural skill had no external place, but was stamped solely in the mind of the workman, so in the same manner neither can the world which existed in ideas have had any other local position except the divine reason which made them; for what other place could there be for his powers which should be able to receive and contain, I do not say all, but even any single one of them whatever, in its simple form? In seven years from the earliest breath, Solar time. On a prograde planet like the Earth, the sidereal day is shorter than the solar day. 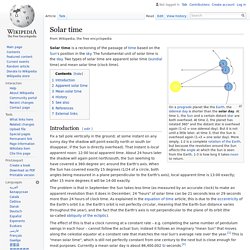 At time 1, the Sun and a certain distant star are both overhead. At time 2, the planet has rotated 360° and the distant star is overhead again (1→2 = one sidereal day). But it is not until a little later, at time 3, that the Sun is overhead again (1→3 = one solar day). More simply, 1-2 is a complete rotation of the Earth, but because the revolution around the Sun affects the angle at which the Sun is seen from the Earth, 1-3 is how long it takes noon to return. Life Facts with 28. Here are some mathematical facts all about the number 28 (twenty eight). 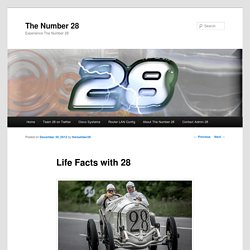 The number 28 is the number between 27 and 29. The number 28 is an even number, as the number ends in 8. Historical Facts. Periodic Table of the Elements: Nickel. Pureple Blog. 28 (number) Twenty-eight is the sum of the totient function for the first nine integers. 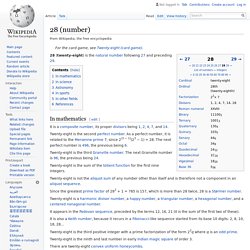 Twenty-eight is not the aliquot sum of any number other than itself and is therefore not a component in an aliquot sequence. Since the greatest prime factor of 282 + 1 = 785 is 157, which is more than 28 twice, 28 is a Størmer number. Twenty-eight is a harmonic divisor number, a happy number, a triangular number, a hexagonal number, and a centered nonagonal number. ANGEL NUMBER 28. 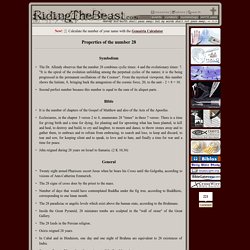 Allendy observes that the number 28 combines cyclic times: 4 and the evolutionary times: 7. "It is the spiral of the evolution unfolding among the perpetual cycles of the nature; it is the being progressed in the permanent oscillations of the Cosmos". From the mystical viewpoint, this number shows the Initiate, 8, bringing back the antagonism of the cosmic force, 20, to the unit - 2 + 8 = 10.Second perfect number because this number is equal to the sum of its aliquot parts.

Bible. Meaning of the Number 25, 27, 28 and 29 in the Bible. The Meaning of Numbers: The Number 25 The number twenty-five in the Bible symbolizes 'grace upon grace.' It is composed of 20 (meaning redemption) and five (grace) or grace multiplied (5 x 5). 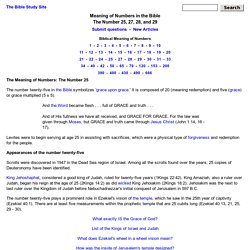 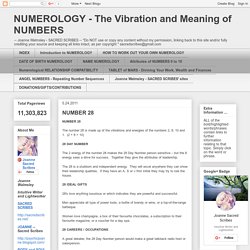 Together they give the attributes of leadership. The 28 is a stubborn and independent energy. They will excel anywhere they can show their leadership qualities. If they have an A, S or J first initial they may try to rule the house.28 IDEAL GIFTS28's love anything luxurious or which indicates they are powerful and successful.Men appreciate all type of power tools, a bottle of brandy or wine, or a top-of-the-range barbeque.Women love champagne, a box of their favourite chocolates, a subscription to their favourite magazine, or a voucher for a day spa.28 CAREERS / OCCUPATIONSA great debater, the 28 Day Number person would make a great talkback radio host or salesperson.

**Repeating Number Sequences (Angel Numbers) The Numerology of the 28 Birth Day number. Your strengths You possess a gift for leadership, but it is employed best through cooperative effort. 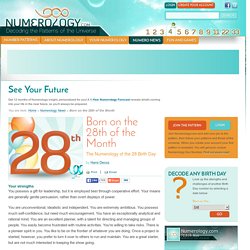 Your means are generally gentle persuasion, rather than overt displays of power. You are unconventional, idealistic and independent. Fun facts about the number. Fun facts about the number 28: - 28 is a perfect number. - There are 28 digits in one cubit. NBA & ABA Players Who Wore Uniform Number 28. MLB Players Who Wore Number 28. Much of the play-by-play, game results, and transaction information both shown and used to create certain data sets was obtained free of charge from and is copyrighted by RetroSheet.

Win Expectancy, Run Expectancy, and Leverage Index calculations provided by Tom Tango of InsideTheBook.com, and co-author of The Book: Playing the Percentages in Baseball. Full-year historical Major League statistics provided by Pete Palmer and Gary Gillette of 24-7 Baseball. Some defensive statistics Copyright BIS, 2010-2016 . Some high school data is courtesy David McWater. NHL Players Who Wore Sweater Number 28. Perfect numbers. Version for printing Today the usual definition of a perfect number is in terms of its divisors, but early definitions were in terms of the 'aliquot parts' of a number. An aliquot part of a number is a proper quotient of the number.