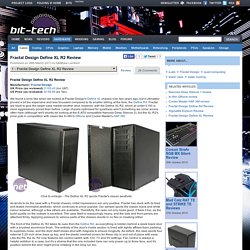 Fractal are back to give the larger case market another shot, however, with the Define XL R2, which at under £100 is more aggressively priced than before. Cooler Master. MasterCase Series The MasterCase represents the crest of a new wave of case technology, pioneering our unique FreeForm™ Modular System, which allows you to expand your case by replacing exterior elements, including top panels and the case door, as well as offering unparalleled flexibility to reconfigure the case interior. 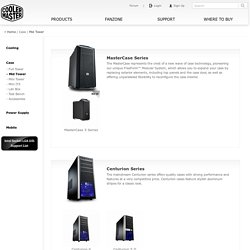 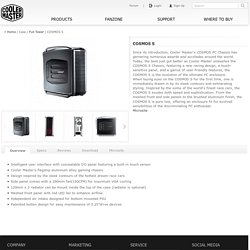 Today, the best just got better as Cooler Master unleashes the COSMOS S Chassis, featuring a new racing design, a touch-sensitive panel, and a gamut of user-friendly features, the COSMOS S is the evolution of the ultimate PC enclosure. When laying eyes on the COSMOS S for the first time, one is immediately drawn in by its sleek contours and exhilarating styling. Inspired by the some of the world's finest race cars, the COSMOS S exudes both speed and sophistication. 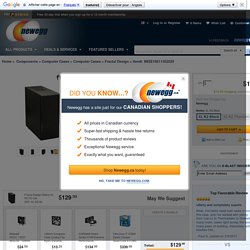 The drive bays are user-friendly. Cabling options are aplenty. Sound dampening is effective while neither unattractive nor obtrusive.I can work inside this so much better than all the midsize towers I've ever worked with, I may never have a mid tower again.The fans at full speed are a bit louder than I care for, but that hasn't been an issue because at 7V they are quiet and move enough air to keep my components cool.External layout is perfect for me, as I keep the tower on the floor (slightly raised for better airflow and less dust).

The front ports are accessible and as aesthetically pleasing as front ports can be.Case arrived in perfect condition. Cons: While the aesthetics are great, make sure you know how big this really is. The bottom-mounted intake fan made an unpleasant noise at 12V. Fractal Design Define XL R2 FD-CA-DEF-XL-R2-BL Black/Pearl Steel ATX Full Tower Computer Case. Rosewill RSV-L4500 Black Metal/ Steel, 1.0 mm thickness , 4U Rackmount Server Chassis, 15 Internal Bays, 8 Included Cooling Fans. This review is from: Rosewill RSV-L4500 - 4U Rackmount Server Case or Chassis - 15 Internal Bays, 8 Cooling Fans Included Pros: Over the last year, I've purchased four of these, though not from Newegg. 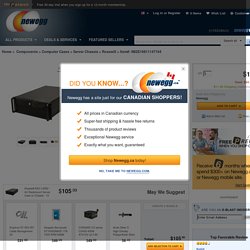 All of them have shipped double-boxed and well padded and arrived in perfect condition. The chassis itself is very sturdy steel, and most of the dangerous sharp edges have been smoothed out. The included fans are very quiet, and this is easily the quietest thing on my rack. Airflow and temperatures are very good. The included drive mount cages are removable (take out two screws and they slide out the front) and hardware is included to mount 5.25 drives in their place. 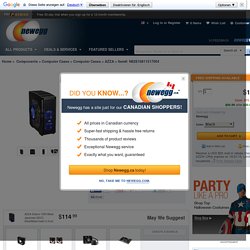 Cons: Three of the fans do not support PWM. Other Thoughts: Three of these fans mate with a male or female 4-pin Molex connector and have 2 wires attached to each of them. Two of the fans have 3 wires connected to a female 3-pin fan connector including a tachometer. The way I configured it with my ASUS 97-PRO mobo was to buy three 4-pin Molex to female 3-pin fan connectors, three 3-pin fan extension cables, and one 3-pin fan y splitter cable with. Simply connect the molex fan connectors to the molex to 3 pin adapter, then attach each one to a FAN outlet on the mobo.