The Final Five: Gaming Cases Between $80 And $120, Rounded-Up - Making A Case For Performance And Value. Our 15-way shootout of cases priced between $80 and $120 ends as we compare the last five models to the previous ten, yielding an overall winner. 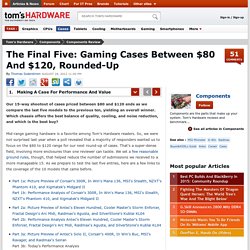 Which chassis offers the best balance of quality, cooling, and noise reduction, and which is the best buy? Mid-range gaming hardware is a favorite among Tom’s Hardware readers. So, we were not surprised last year when a poll revealed that a majority of responders wanted us to focus on the $80 to $120 range for our next round-up of cases. That's a super-dense field, involving more enclosures than one reviewer can tackle. We set a few reasonable ground rules, though, that helped reduce the number of submissions we received to a more manageable 15. Three Gaming Cases, With Power, Under $100 - Sticking It To “The Man” Case and power supply combos always look like a bargain, but bargain-basement parts have always seemed to chase experienced builders away. 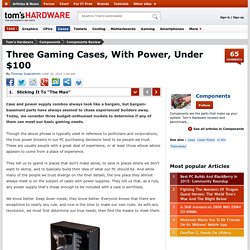 Today, we consider three budget-enthusiast models to determine if any of them can meet our basic gaming needs. Though the above phrase is typically used in reference to politicians and corporations, the true power brokers in our PC purchasing decisions tend to be people we trust. These are usually people with a great deal of experience, or at least those whose advice appears to come from a place of experience. They tell us to spend in places that don’t make sense, to save in places where we don’t want to skimp, and to basically build their idea of what our PC should be.

And while many of the people we trust diverge on the finer details, the one place they almost always meet is on the subject of cases with power supplies. We know better. Part 2: Four More Gaming Enclosures Under $50 - And Then There Were Seven. Garnering playable frame rates from entry-level hardware often requires ambitious overclocking. 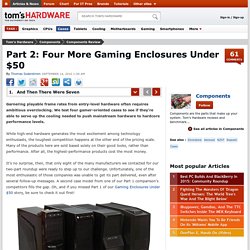 We test four gamer-oriented cases to see if they're able to serve up the cooling needed to push mainstream hardware to hardcore performance levels. While high-end hardware generates the most excitement among technology enthusiasts, the toughest competition happens at the other end of the pricing scale. Many of the products here are sold based solely on their good looks, rather than performance. After all, the highest-performance products cost the most money. It’s no surprise, then, that only eight of the many manufacturers we contacted for our two-part roundup were ready to step up to our challenge.

Part 1: Four Gaming Enclosures Under $50 - When A $50 Chassis…Isn’t. Sometimes, overclocking is the key to getting budget hardware humming along at enthusiast-class performance levels. 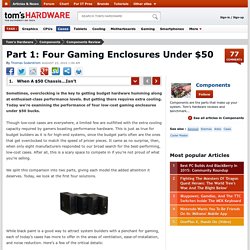 But getting there requires extra cooling. Today we're examining the performance of four low-cost gaming enclosures under $50 bucks. Though low-cost cases are everywhere, a limited few are outfitted with the extra cooling capacity required by gamers boasting performance hardware. This is just as true for budget builders as it is for high-end systems, since the budget parts often are the ones that get overclocked to match the speed of pricier pieces.

It came as no surprise, then, when only eight manufacturers responded to our broad search for the best-performing, low-cost cases. We split this comparison into two parts, giving each model the added attention it deserves. The Final Five: Gaming Cases Between $80 And $120, Rounded-Up - Making A Case For Performance And Value. Four More Sub-$100 Cases For Your Gaming Build, Reviewed - Value-Oriented Cases: More Quality, Same Cash? Our second group of value-oriented cases looked good in the photo preview, but we really wanted to see how they’d perform with a load of hot gaming hardware. 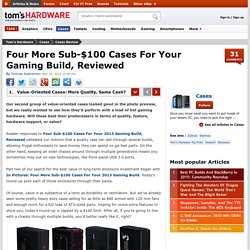 Will these beat their predecessors in terms of quality, feature, hardware support, or value? Reader responses to Four Sub-$100 Cases For Your 2013 Gaming Build, Reviewed validated our notions that a quality case can last through several builds, allowing frugal enthusiasts to save money they can spend on go-fast parts. On the other hand, keeping an older chassis around through multiple generations means you sometimes miss out on new technologies, like front-panel USB 3.0 ports. The Final Three: Sub-$100 Cases For Your Gaming Build - Three More Cases And A Grand Finale. The journey was a long one, but we're finally wrapping up our round-up of sub-$100 gaming cases. 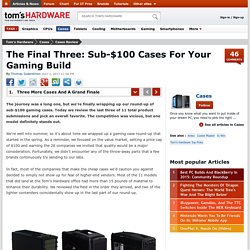 Today we review the last three of 11 total product submissions and pick an overall favorite. The competition was vicious, but one model definitely stands out. We're well into summer, so it's about time we wrapped up a gaming case round-up that started in the spring. As a reminder, we focused on the value market, setting a price cap of $100 and warning the 28 companies we invited that quality would be a major consideration. Fortunately, we didn’t encounter any of the throw-away parts that a few brands continuously try sending to our labs.

In fact, most of the companies that make the cheap cases we'd caution you against decided to simply not show up for fear of higher-end vendors. Fractal Design Arc Midi R2 Review: Improving On A Classic Case - Fractal Design's Arc Midi R2 ATX Case Review. Fractal Design scored a lot of fans with the simple and elegant architecture of its Arc Midi enclosure. 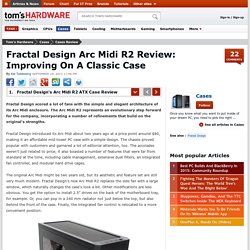 The Arc Midi R2 represents an evolutionary step forward for the company, incorporating a number of refinements that build on the original's strengths. Fractal Design introduced its Arc Midi about two years ago at a price point around $80, making it an affordable mid-tower PC case with a simple design. The chassis proved popular with customers and garnered a lot of editorial attention, too. The accolades weren't just related to price; it also boasted a number of features that were far from standard at the time, including cable management, extensive dust filters, an integrated fan controller, and modular hard drive cages. The original Arc Midi might be two years old, but its aesthetic and feature set are still very much modern. Packaging The Swedish case vendor typically builds its chassis to be simple and elegant. 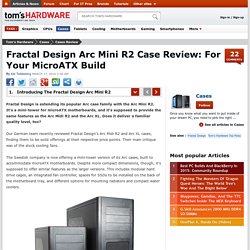 It's a mini-tower for microATX motherboards, and it’s supposed to provide the same features as the Arc Midi R2 and the Arc XL. Does it deliver a familiar quality level, too? Our German team recently reviewed Fractal Design's Arc Midi R2 and Arc XL cases, finding them to be solid offerings at their respective price points. Their main critique was of the stock cooling fans. The Swedish company is now offering a mini-tower version of its Arc cases, built to accommodate microATX motherboards. 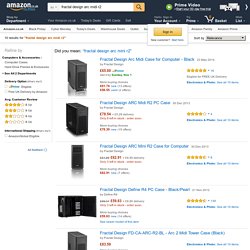