Written in perl .. and works OK with tmux .. but seems to see less recent dev than weechat .. I am leaning towards weechat ..

Getting around in Weechat. Continuing our little mini series I wanted to introduce a great alternative to Irssi, called Weechat. 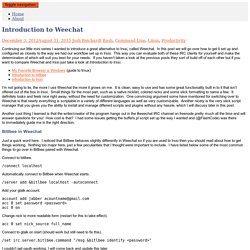 In this post we will go over how to get it set up and configured as closely to the way we had our workflow set up in Irssi. This way you can evaluate both of these IRC clients for yourself and make the determination of which will suit you best for your needs. If you haven’t taken a look at the previous posts they sort of build off of each other but if you want to compare Weechat and Irssi just take a look at Introduction to Irssi. I’m not going to lie, the more I use Weechat the more it grows on me. It is clean, easy to use and has some great functionality built in to it that isn’t offered out of the box in Irssi. Another cool thing I learned is that the writer/creator of the program hangs out in the #weechat IRC channel on freenode pretty much all the time and will answer questions for you! Beginners guide to Irssi.

If you have been a follower this blog, I wrote a post awhile back that described my preferred settings in tmux and just recently wrote a post about getting set up with bitlbee. 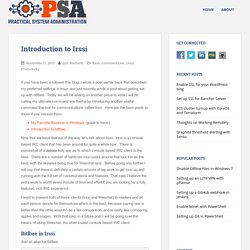 Today we will be adding on another piece to what I will be calling my ultimate command line theme by introducing another useful command line tool for communications called Irssi. Here are the back posts to these if you missed them. Now that we have that out of the way let’s talk about Irssi. Irssi is a console based IRC client that has been around for quite a while now.

There is somewhat of a debate holy war as to which console based IRC client is the best. I want to present both of these clients (Irssi and Weechat) to readers and let each person decide for themselves which is the best, because saying one is better than the other wouldn’t be a fair comparison, and is really like comparing apples and orages. When Irssi Meets Tmux « CLUSTERFUCK. Scripts & Theme That I Use Theme xchat.themeScripts xchatnickcolor.pladv_windowlist.plusercount.plnicklist.plhilightwin.pltrackbar.pl Put theme in ~/.irssi and scripts in ~/.irssi/scripts. cd ~/.irssi/scripts/autorunln -s .. 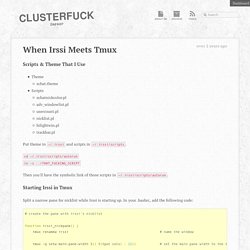 /THAT_FUCKING_SCRIPT. Tmux and irssi sitting in a tree... Irssi and tmux (or screen) In my last post I described a basic setup for bitlbee and irssi. 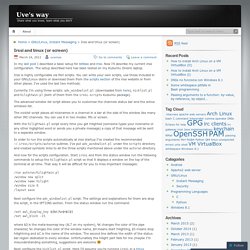 Now I’ll describe my current irssi configuration. The setup described here has been tested on my Kubuntu Oneiric laptop. Irssi is highly configurable via Perl scripts. You can write your own scripts, use those included in your GNU/Linux distro or download them from the scripts section of the irssi website or from other places. I’ve used the last two methods.

The advanced window list script allows you to customise the channels status bar and the active windows list. The nicklist script places all nicknames in a channel in a bar at the side of the window like many other IRC-channels. With the hilightwin.pl script every time you get hilighted (someone types your nickname or any other higlighted word or sends you a private message) a copy of that message will be sent to a separate window. Scripts.irssi.org/tmux-nicklist-portable.pl at gh-pages · irssi/scripts.irssi.org. Irssi - The client of the future. Irssi Scripts. Advanced Irssi Usage. Updated by Linode With a flexible plugin architecture and embedded Perl interpreter, you can customize Irssi a great deal beyond the off-the-shelf experience. 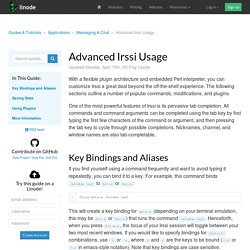 The following sections outline a number of popular commands, modifications, and plugins. One of the most powerful features of Irssi is its pervasive tab completion. All commands and command arguments can be completed using the tab key by first typing the first few characters of the command or argument, and then pressing the tab key to cycle through possible completions. Nicknames, channel, and window names are also tab-completable. Key Bindings and Aliases If you find yourself using a command frequently and want to avoid typing it repeatedly, you can bind it to a key.

This will create a key binding for meta-x (depending on your terminal emulation, this may be Alt-x or Esc-x) that runs the command /window last. Alternatively, you may want to create an “alias,” which is a shortening of a specific command. Saving State Using Plugins. Using Irssi for Internet Relay Chat. Updated by Elle Krout Irssi is a terminal-based chat client for real-time conversations over Internet Relay Chat (IRC). 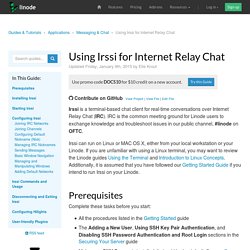 IRC is the common meeting ground for Linode users to exchange knowledge and troubleshoot issues in our public channel, #linode on OFTC. Irssi can run on Linux or MAC OS X, either from your local workstation or your Linode. If you are unfamiliar with using a Linux terminal, you may want to review the Linode guides Using the Terminal and Introduction to Linux Concepts. Additionally, it is assumed that you have followed our Getting Started Guide if you intend to run Irssi on your Linode. Prerequisites Complete these tasks before you start: All the procedures listed in the Getting Started guide The Adding a New User, Using SSH Key Pair Authentication, and Disabling SSH Password Authentication and Root Login sections in the Securing Your Server guide Make sure GNU Screen is installed. To install Irssi, issue the command for the appropriate system: Debian or Ubuntu: Arch: