Gitter is an instant messaging and chat room system for developers and users of GitHub repositories.

Gitter is provided as software-as-a-service, with a free option providing all basic features and the ability to create a single private chat room, and paid subscription options for individuals and organisations, which allows them to create arbitrary numbers of private chat rooms.

Individual chat rooms can be created for individual git repositories on GitHub. Chatroom privacy follows the privacy settings of the associated GitHub repository: thus, a chatroom for a private (i.e. members-only) GitHub repository is also private to those with access to the repository. A graphical badge linking to the chat room can then be placed in the git repository's README file, bringing it to the attention of all users and developers of the project. Users can chat in the chat rooms, or access private chat rooms for repositories they have access to, by logging in to Gitter via GitHub[2] (which does not involve sharing the user's GitHub password with Gitter). 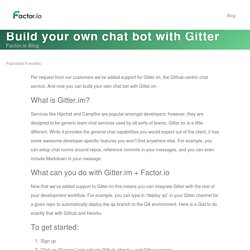 And now you can build your own chat bot with Gitter.im. What is Gitter.im? Services like Hipchat and Campfire are popular amongst developers; however, they are designed to be generic team chat services used by all sorts of teams. Gitter.im is a little different. While it provides the general chat capabilities you would expect out of the client, it has some awesome developer-specific features you won’t find anywhere else. What can you do with Gitter.im + Factor.io Now that we’ve added support to Gitter.im this means you can integrate Gitter with the rest of your development workflow. To get started: Sign up Click on “Service” and activate Github, Heroku, and Gitter services Click “Create Workflow” and select “Custom Workflow” In the definition paste in the contents of this gist. 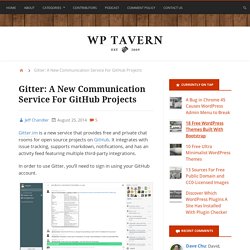 It integrates with issue tracking, supports markdown, notifications, and has an activity feed featuring multiple third-party integrations. In order to use Gitter, you’ll need to sign in using your GitHub account. As you can see from the screenshot above, channels are on the left with the main text window in the center. Users and their online status are shown on the top-right side of the window along with a tab to switch between people and repository information.

Activity related to the GitHub repository is displayed below the user information. WordPress Projects Already Using Gitter The Metadata UI API and Image Flow WordPress projects are already utilizing Gitter in place of IRC to handle real-time communications during meetings. IRC doesn’t support media or markdown which are two distinct traits that come in handy when working with GitHub projects. Like this: Like Loading... Related. Gitter. First look on Gitter, the chat for GitHub. Gitter is a GitHub-based chat tool for developers. I pinged Mike Barlett of Gitter, a GitHub-based chat tool, now in limited beta, and we chatted about the tool which is geared to use by developers. 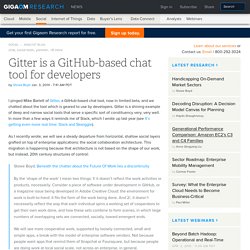 Gitter is a shining example of deep and narrow social tools that serve a specific sort of constituency very, very well. In more than a few ways it reminds me of Slack, which I wrote up last year (see It’s getting even more real time: Slack and Skwiggle). As I recently wrote, we will see a steady departure from horizontal, shallow social layers grafted on top of enterprise applications: the social collaboration architecture.

This migration is happening because that architecture is not based on the shape of our work, but instead, 20th century structures of control: Stowe Boyd, Beneath the chatter about the Future Of Work lies a discontinuityBy the ‘shape of the work’ I mean two things: 1/ it doesn’t reflect the work activities or products, necessarily. Know who’s seen any message. Gitter is a GitHub-based chat tool for developers.