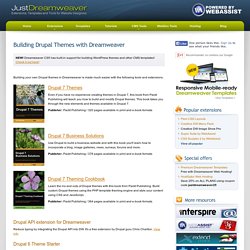 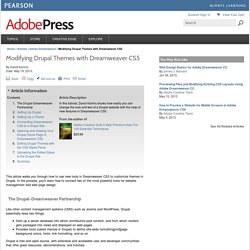 In the process, you'll learn how to connect two of the most powerful tools for website management and web page design. Like other content management systems (CMS) such as Joomla and WordPress, Drupal essentially does two things: Sets up a server database into which contributors post content, and from which content gets packaged into views and displayed on web pages Provides tools (called themes in Drupal) to define site-wide formatting[md]page background colors, fonts, link formatting, and so on Drupal is free and open source, with extensive and accessible user and developer communities that offer great resources, demonstrations, and tutorials. Dreamweaver CS5, the other partner in this process, provides unparalleled ability to define and format the external Cascading Style Sheets (CSS) files that can be used to control the look and feel of websites. Dreamweaver CS6: Setting up a Drupal 7 Server in Dreamweaver CS6. In this tutorial we will show you how to set up a Drupal 7 server that has been set up locally so that you can edit it in Dreamweaver CS6. 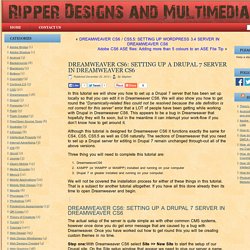 We will also show you how to get round the “Dynamically-related files could not be resolved because the site definition is not correct for this server” error that a LOT of people have been getting while working with Drupal in Dreamweaver CS6. This appears to be a bug in Dreamweaver that hopefully they will fix soon, but in the meantime it can interrupt your work-flow if you don’t know how to get around it. Although this tutorial is designed for Dreamweaver CS6 it functions exactly the same for CS4, CS5, CS5.5 as well as CS6 naturally. The sections of Dreamweaver that you need to set up a Drupal server for editing in Drupal 7 remain unchanged through-out all of the above versions.

Three thing you will need to complete this tutorial are: We will not be covered the installation process for either of these things in this tutorial. Pre-release video sneak: Dreamweaver Themer's Kit extension for Drupal. Drupal dreamweaver extension for theming. Configuring Dreamweaver. Adobe's popular Dreamweaver software can handle your PHP, template and CSS files just fine. 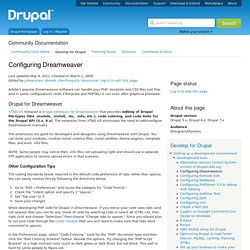 And in some configurations (with XTemplate and PHPTAL) it can even offer graphical previews. Drupal for Dreamweaver XTND.US released a Drupal extension for Dreamweaver that provides editing of Drupal file-types (like .module, .install, .inc, .info, etc.), code coloring, and code hints for the Drupal API (5.x, 6.x). The extension from XTND.US eliminates the need to edit/configure Dreamweaver manually. The extensions are good for developers and designers using Dreamweaver with Drupal. NOTE: Some people may notice their .info files not uploading right and should use a separate FTP application to resolve upload errors in that scenario.

Other Configuration Tips The coding standards tweak required is the default code preference of tabs rather than spaces. Go to "Edit » Preferences" and locate the category for "Code Format. " In the Preferences page, select "Code Coloring. " In Extensions.txt : All Documents. Drupal Theme Starter. Working with Drupal in Dreamweaver CS5. Drupal basics If you build websites and use databases to store their content then you are likely already familiar with CMS. 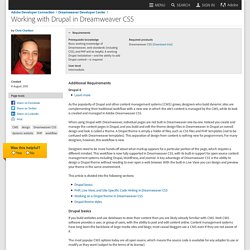 Web CMS software provides a user, or group of users, with the ability to post and edit content online. Content management systems have long been the backbone of large media sites and blogs; most casual bloggers use a CMS even if they are not aware of it. The most popular CMS options today are all open source, which means the source code is available for any adopter to use or modify as they want (subject to the terms of its license). My open source platform of choice is Drupal.

Drupal makes it easy to post and manage content, including articles, blog posts, and web pages; even navigation and sidebars are managed within Drupal. Drupal is community-built and community-oriented. PHP, Live View, and Site-Specific Code Hinting in Dreamweaver CS5 The game has changed for web professionals. Dreamweaver has supported PHP for almost a decade. Live View.