Hawaii seeks to ban toxic chemical sunscreens to save the coral reefs from chemical decimation – NaturalNews.com. (Natural News) Many snorkelers who are drawn to Hawaii’s coral reefs have noticed that they are not brimming with life the way they once did, and it looks like they only have themselves to blame. 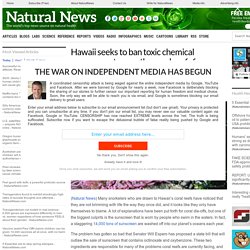 A lot of explanations have been put forth for coral die-offs, but one of the biggest culprits is the sunscreen that is worn by people who swim in the waters. In fact, a staggering 14,000 tons of sunscreen are washed off into our planet’s oceans each year. The problem has gotten so bad that Senator Will Espero has proposed a state bill that will outlaw the sale of sunscreen that contains octinoxate and oxybenzone. These two ingredients are responsible for many of the problems coral reefs are currently facing, and they enter the water when people who wear sunscreen go swimming, surfing, snorkeling or even take beach showers. The chemicals cause deformities in coral larvae, preventing them from swimming, settling and forming new colonies. Don't drink from the tap: Northeast states on alert after high levels of carcinogenic acid found in water supply.

Yachtsman describes horror at ‘dead’, rubbish strewn Pacific Ocean. An Australian sailor has described parts of the Pacific Ocean as “dead” because of severe overfishing, with his vessel having to repeatedly swerve debris for thousands of kilometres on a journey from Australia to Japan. 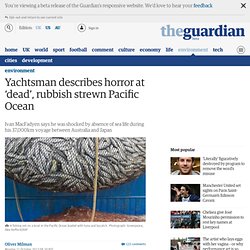 Ivan MacFadyen told of his horror at the severe lack of marine life and copious amounts of rubbish witnessed on a yacht race between Melbourne and Osaka. He recently returned from the trip, which he previously completed 10 years ago. “In 2003, I caught a fish every day,” he told Guardian Australia. “Ten years later to the day, sailing almost exactly the same course, I caught nothing. It started to strike me the closer we got to Japan that the ocean was dead. “Normally when you are sailing a yacht, there are one or two pods of dolphins playing by the boat, or sharks, or turtles or whales. Report: Many urban tap water systems loaded with SSRI antidepressant drugs. (NaturalNews) As you may recall, the Associated Press (AP) released the results of a groundbreaking investigation it conducted back in 2008 concerning the presence of pharmaceutical drugs in the water supply. 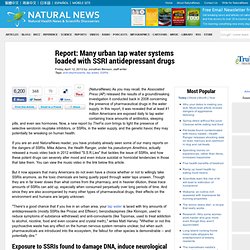 In this report, it was revealed that at least 41 million Americans are exposed daily to tap water containing trace amounts of antibiotics, sleeping pills, and even sex hormones. Now, a new report by TheFix.com brings to light the presence of selective serotonin reuptake inhibitors, or SSRIs, in the water supply, and the genetic havoc they may potentially be wreaking on human health. If you are an avid NaturalNews reader, you have probably already seen some of our many reports on the dangers of SSRIs. Mike Adams, the Health Ranger, under his pseudonym Amethios, actually released a music video back in 2012 entitled "S.S.R.Lies" that tackles the issue of SSRIs, and how these potent drugs can severely alter mood and even induce suicidal or homicidal tendencies in those that take them. 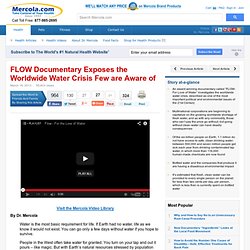 Mercola Water is the most basic requirement for life. If Earth had no water, life as we know it would not exist. You can go only a few days without water if you hope to survive. People in the West often take water for granted. Water, Water Everywhere... Most people don’t realize that only 10 percent of the world’s fresh water supply is used for homes. Water and Its Contaminants Are Circling the Globe According to FLOW, the most common water contaminant is a chemical called Atrazine. The Emergence of a Water Cartel Traditionally, governments have delivered water to the public as a service. Bottled Water: A Blight on Planet Earth Worldwide, $100 million is spent annually on bottled water.

Dams Displace People and Destroy Ecosystems Even if you’re educated about the negative impacts of bottled water, you may not be aware of the problems dams have posed for the environment and local communities. Fresh Water for Only PENNIES Per Person.