Colorado ranks near top nationally in tornado activity. The tornado sighting that set off alarms and frightened passengers at Denver International Airport Tuesday afternoon was a startling reminder that Colorado is indeed twister country. 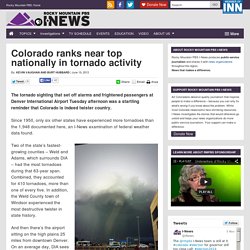 Since 1950, only six other states have experienced more tornadoes than the 1,948 documented here, an I-News examination of federal weather data found. Jen Milazzo / Special to I-News Network at Rocky Mountain PBS A tornado touches down at Denver International Airport on Tuesday afternoon, June 18, 2013. The Nation Weather Service rated it as an EF1 that registered 97 mph winds sparking the evacuation of the airports common areas, but no injuries were reported. Two of the state’s fastest-growing counties – Weld and Adams, which surrounds DIA – had the most tornadoes during that 63-year span. And then there’s the airport sitting on the high plains 25 miles from downtown Denver. 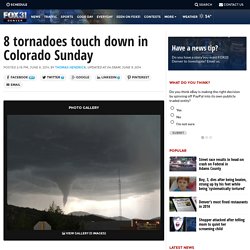 FOX31 Denver viewer Maureen Stewart sent us a photo of the twister about two miles south of the town around 11 a.m. At this time, Park County Communications received several reports of a tornado on the ground moving northeast in the area of Black Mountain. The twister lasted about five minutes. There have been reports of injuries or damage, according to Park County officials. There was no tornado warnings or advisories for that area at the time. Viewers also sent us photos of funnel clouds near Lake George to the south and east of Fairplay. Tornadoes - Tornado Facts - Tornadoes for Kids - Weather Facts for kids. Tornadoes What is a tornado? 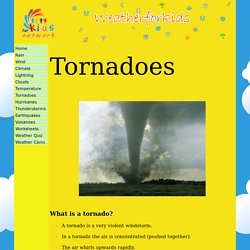 · A tornado is a very violent windstorm. · In a tornado the air is concentrated (pushed together). · The air whirls upwards rapidly. · A tornado is grey in colour and looks like an elephant’s trunk swaying down from the clouds to touch the ground with its tip. How do tornadoes form? How do Tornadoes form? 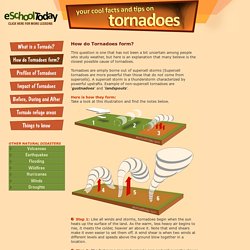 This question is one that has not been a bit uncertain among people who study weather, but here is an explanation that many believe is the closest possible cause of tornadoes. Tornadoes are simply borne out of supercell storms (Supercell tornadoes are more powerful than those that do not come from supercells). A supercell storm is a thunderstorm characterized by powerful updrafts.

Web Weather for Kids: Tornadoes on the Soccer Field! As you read the story below, think about how you would answer these questions. 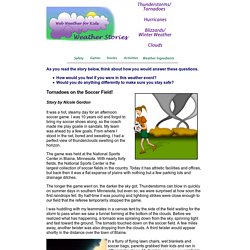 How would you feel if you were in this weather event? Would you do anything differently to make sure you stay safe? Tornadoes on the Soccer Field! Story by Nicole Gordon It was a hot, steamy day for an afternoon soccer game. The game was held at the National Sports Center in Blaine, Minnesota. The longer the game went on, the darker the sky got. I was huddling with my teammates in a canvas tent by the side of the field waiting for the storm to pass when we saw a funnel forming at the bottom of the clouds. In a flurry of flying lawn chairs, wet blankets and soccer bags, parents grabbed their kids and ran in different directions. We crouched just above the ditch water, worried about lightning strikes, and watched the tornado come closer until it was just across the field and the grass flew in its wake I could see every detail of its twisting body. SAFETY RULES: (Adapted from NOAA) Tornadoes. Tornado. 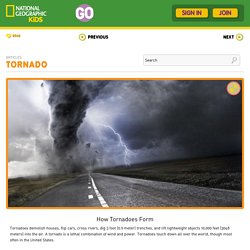 The 2014 U.S. Tornado Season Has Begun. Each year, from March to June, millions of Americans that live in the Midwestern and Southern United States, brace themselves for the tornado season. 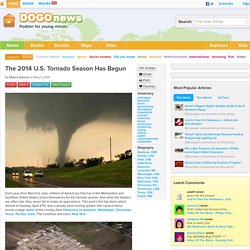 And while the twisters are often late, they never fail to make an appearance. This year's first big storm which arrived on Sunday, April 27th, was a deadly slow moving system that caused havoc across a large swath of the country from Oklahoma to Alabama, Mississippi, Tennessee, Texas, Florida, Iowa, The Carolinas and even, New York. 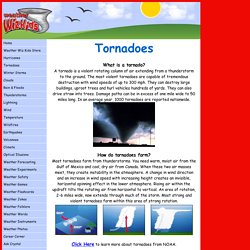 A tornado is a violent rotating column of air extending from a thunderstorm to the ground. The most violent tornadoes are capable of tremendous destruction with wind speeds of up to 300 mph. They can destroy large buildings, uproot trees and hurl vehicles hundreds of yards. They can also drive straw into trees. Damage paths can be in excess of one mile wide to 50 miles long. How do tornadoes form? What are some other factors for tornadoes to form? What is a funnel cloud?