A list of Colorado's historic blizzards and snowstorms. Snow removal in 1913 at Civic Center open space. 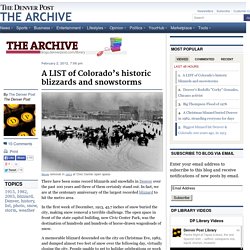 There have been some record blizzards and snowfalls in Denver over the past 100 years and three of them certainly stand out. In fact, we are at the centenary anniversary of the largest recorded blizzard to hit the metro area. In the first week of December, 1913, 45.7 inches of snow buried the city, making snow removal a terrible challenge. The open space in front of the state capitol building, now Civic Center Park, was the destination of hundreds and hundreds of horse-drawn wagonloads of snow. A memorable blizzard descended on the city on Christmas Eve, 1982, and dumped almost two feet of snow over the following day, virtually closing the city. In the heaviest snowfall since 1913, a mid-March blizzard in 2003 dropped 31.8 inches in Denver, making it one of the costliest storms to address, at a whopping $33.6 million, based on insurance claims.

Here is the complete breakdown from NOAA: [/media-credit] Blinding Blizzards! In the middle of this blizzard, no people are out, no cars are out, snow is high, and visibility is low. 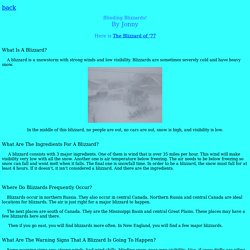 What Are The Ingredients For A Blizzard? A blizzard consists with 3 major ingredients. One of them is wind that is over 35 miles per hour. This wind will make visibility very low with all the snow. Another one is air temperature below freezing. Major Blizzards in the U.S. Fun Snow Facts for Kids - Interesting Information about Snow. Snow forms when water vapor in the atmosphere freezes into ice crystals. 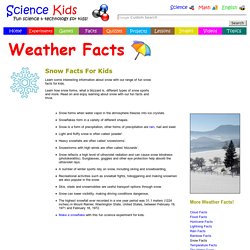 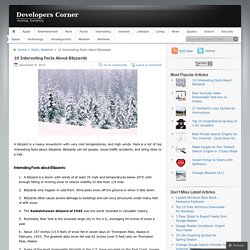 Here is a list of top interesting facts about blizzards. Blizzards can kill people, cause traffic accidents, and bring cities to a halt. Interesting Facts about Blizzards: A blizzard is a storm with winds of at least 35 mph and temperatures below 20°F, with enough falling or moving snow to reduce visibility to less than 1/4 mile.Blizzards only happen in cold front.

Tip: Do you know about Top 10 Worst Blizzards in Chicago History? Other Facts about Blizzards: The Midwestern U.S. and central Canada is often referred to as “blizzard country.” They build houses with steep roofs so snow won’t pile up and farmers even purposely plant wheat in the fall. Blizzard - Earth Facts and Information. By definition, a blizzard is an extended, severe snowstorm. 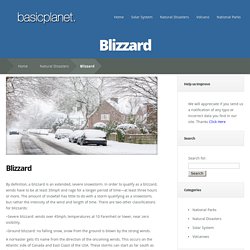 In order to qualify as a blizzard, winds have to be at least 35mph and rage for a longer period of time—at least three hours or more. The amount of snowfall has little to do with a storm qualifying as a snowstorm, but rather the intensity of the wind and length of time. There are two other classifications for blizzards: –Severe blizzard: winds over 45mph, temperatures at 10 Farenheit or lower, near zero visibility.

–Ground blizzard: no falling snow, snow from the ground is blown by the strong winds. A nor’easter gets it’s name from the direction of the oncoming winds. What causes blizzards? Blizzards are usually formed when the jet stream pitches very far south. Any area which is mostly flat is susceptible to blizzards, though there are some areas in the US, Australia, and the UK that suffer from blizzards more than others. Dangerous Weather. Three things are needed to make a blizzard. 1. 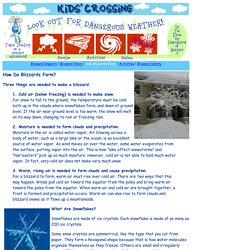 Cold air (below freezing) is needed to make snow. For snow to fall to the ground, the temperature must be cold both up in the clouds where snowflakes form, and down at ground level. If the air near ground level is too warm, the snow will melt on its way down, changing to rain or freezing rain. 2. Moisture is needed to form clouds and precipitation. What Are Snowflakes? Snowflakes are made of ice crystals. Some snow crystals are symmetrical, like the type that you cut from paper. Even though most have a hexagonal structure, there are so many ways that water molecules can arrange themselves as the water freezes, that some people say that there are no two snowflakes alike. 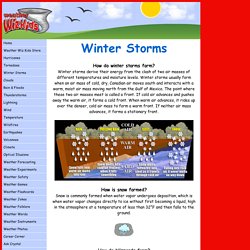 Winter storms derive their energy from the clash of two air masses of different temperatures and moisture levels. Winter storms usually form when an air mass of cold, dry, Canadian air moves south and interacts with a warm, moist air mass moving north from the Gulf of Mexico. The point where these two air masses meet is called a front. If cold air advances and pushes away the warm air, it forms a cold front. Blizzards & Winter Weather. Do you know the basic ingredients for weather? 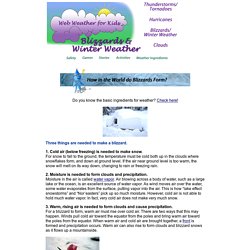 Check here! Three things are needed to make a blizzard. 1. Cold air (below freezing) is needed to make snow. For snow to fall to the ground, the temperature must be cold both up in the clouds where snowflakes form, and down at ground level. Web Weather for Kids: Adventures in Snow! Do you know how to stay safe? 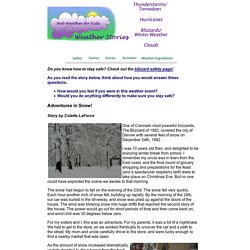 Check out the blizzard safety page! As you read the story below, think about how you would answer these questions. How would you feel if you were in this weather event? Would you do anything differently to make sure you stay safe? Adventures in Snow! Story by Colette LaForce.