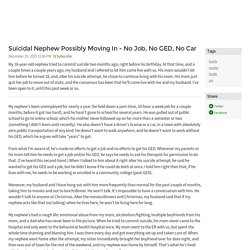 At that time, and a couple times a couple years ago, my husband and I offered to let him come live with us. His mom wouldn't let him before he turned 18, and, after his suicide attempt, he chose to continue living with his mom. His mom just quit her job to move out of state, and the consensus has been that he'll come live with me and my husband. My bleeding heart is shriveling up - nyc moving newyork. So I moved to Brooklyn, landed a great magazine internship in the city, and seem to be on the right track professionally. 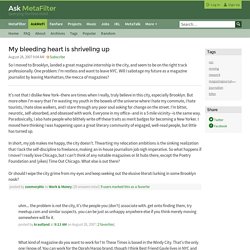 One problem: I'm restless and want to leave NYC. Will I sabotage my future as a magazine journalist by leaving Manhattan, the mecca of magazines? It's not that I dislike New York--there are times when I really, truly believe in this city, especially Brooklyn. "...everybody’s worst fears are coming true, as far as we can tell." Zero dollars - work money employment. How do you talk to someone who interprets everything as an attack? - communication defensive anxiety. Help me Metafilter! 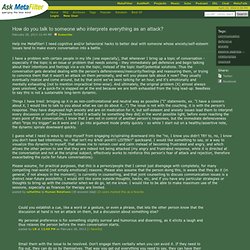 I need cognitive and/or behavioral hacks to better deal with someone whose anxiety/self-esteem issues tend to make every conversation into a battle. I have a problem with certain people in my life (one especially), that whenever I bring up a topic of conversation - especially if the topic is an issue or problem that needs solving - they immediately get defensive and begin talking about their intentions and feelings vis-a-vis the topic, instead of the topic itself/potential solutions. Thus the conversation gets derailed dealing with the person's defensiveness/insecurity/feelings and reassuring them, or trying to convince them that it wasn't an attack on them personally, and will you please talk about X now? Gender-Filter. Recent on the blue, there have been a perceived recent spate of posts which highlight gender inequalities. 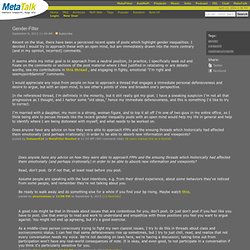 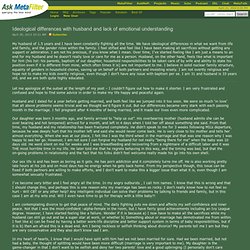 We have ideological differences in what we want from life and family, and the gender roles within the family. I feel stifled and feel like I have been making all sacrifices without getting any support or admiration. I am not his precious, if you know what I mean. Over time, I’ve started feeling like I am just a means to an end for my husband and he doesn’t really love or care for me as a person. Husband, on the other hand, feels like what is important for him (his list: his parents, baptism of our daughter, household responsibilities to be taken care of by wife and ability to state his position even if it is different from mine, which often times it is) are not important to me.

Let me apologize at the outset at the length of my post – I couldn’t figure out how to make it shorter. Is this a new law? The Extraordinary Science of Junk Food. What superpower or quirk have you picked up because of your 9-5 gig? - work skill habit. Please tell me about the habits and skills you've picked up as a result of your profession. 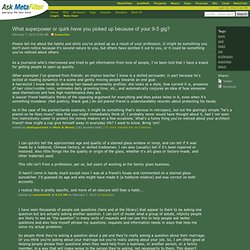 It might be something you don't even notice because it's second nature to you, but others have pointed it out to you, or it could be something you've noticed about others. As a journalist who's interviewed and tried to get information from tons of people, I've been told that I have a knack for getting people to open up quickly. Other examples I've gleaned from friends: an improv teacher I know is a skilled persuader, in part because he's skilled at reading dynamics in a scene and gently moving people towards an end goal. A hairstylist I know tends to develop hair-based personality profiles: she looks at a style, how current it is, presence of hair color/visible roots, estimates daily grooming time, etc., and automatically conjures an idea of how someone sees themselves and how high maintenance they are. Is Culture the Key to College Success? How to motivate immigrant in-laws? - family.

How do we help our non-English-speaking immigrant in-laws adapt to the United States, especially when their notions of respectability and gender roles seem to be holding them back? 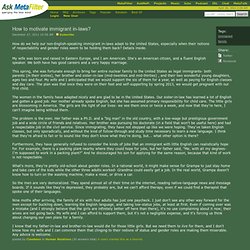 Details inside. Steve Murgaski. Is writing great fiction innate or learned? - nonfiction authorship. Writing fiction: is it the sort of thing where you either have "the gift," or you don't? 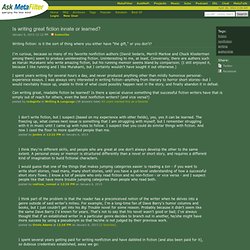 I'm curious, because so many of my favorite nonfiction authors (David Sedaris, Merrill Markoe and Chuck Klosterman among them) seem to produce uninteresting fiction. Uninteresting to me, at least. Conversely, there are authors such as Haruki Murakami who write amazing fiction, but his running memoir seems bland by comparison. (I still enjoyed it, because I like running and I like Murakami, but I certainly wouldn't have sought it out otherwise.)

I spent years writing for several hours a day, and never produced anything other than mildly humorous personal-experience essays. Can writing great, readable fiction be learned?