What If They Weren't Blueberries? - Kyra Tuiama. Keep falling down - Chapter 1 - AmericanEireann - Zootopia (2016) Chapter Text It was a lot, he reflected in an absurdly calm corner of his mind, like going over a cliff. 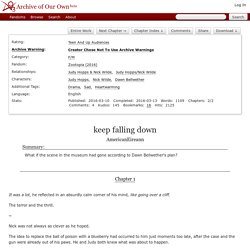 The terror and the thrill. Nick was not always as clever as he hoped. The idea to replace the ball of poison with a blueberry had occurred to him just moments too late, after the case and the gun were already out of his paws. He and Judy both knew what was about to happen. “I’m so sorry,” he whispered to her, oblivious to Bellwether's triumphant monologue above them. “I know,” she whispered back. Nick shuddered and turned his mind inward, hoping against hope that somehow he could hold onto his own consciousness, cling tight to what made him himself. Then the howling darkness claimed him, and the fox knew only, with vicious certainty, that there was a rabbit nearby. Turning Savage - martiansonmars. He is hit by a whiff of blue berries. 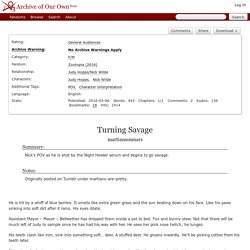 It smells like extra green grass and the sun beating down on his face. Like his paws sinking into soft dirt after it rains. His eyes dilate. Assistant Mayor – Mayor – Bellwether has dropped them inside a pot to boil. Fox and bunny stew. His teeth clash like iron, sink into something soft… deer. Open Your Eyes - libtastic - Zootopia (2016) It was cold. 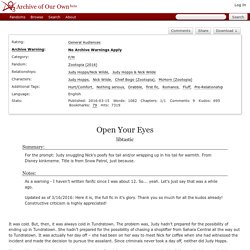 But, then, it was always cold in Tundratown. The problem was, Judy hadn’t prepared for the possibility of ending up in Tundratown. Technically Single - knockoutqueenoftheunderworld - Zootopia (2016) Gazelle in concert was something Judy had never considered would ever be an option in her life. 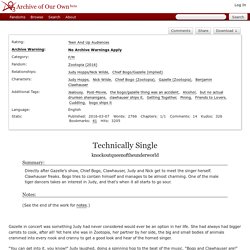 She had always had bigger carrots to cook, after all! Yet here she was in Zootopia, her partner by her side, the big and small bodies of animals crammed into every nook and cranny to get a good look and hear of the horned singer. “You can get into it, you know!” Judy laughed, doing a spinning hop to the beat of the music. “Bogo and Clawhauser are!”

“I have an image to maintain, Carrots.” “Try… everything.” “JUDY!” “What is it?” A warty pig stood with the other two officers looking official in sunglasses and a security suit. “We get to meet her!” When Instinct Falls - upplet. Hey Everyone! 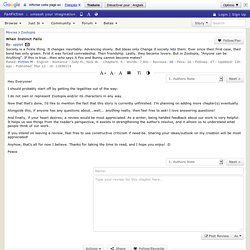 I should probably start off by getting the legalities out of the way: I do not own or represent Zootopia and/or its characters in any way. Now that that's done, I'd like to mention the fact that this story is currently unfinished. I'm planning on adding more chapter(s) eventually. Shine My Light On You - jingle. No Strings Attached - batterout. It started with string tricks. 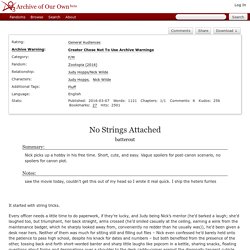 Every officer needs a little time to do paperwork, if they’re lucky, and Judy being Nick’s mentor (he’d barked a laugh; she’d laughed too, but triumphant, her back straight, arms crossed (he’d smiled casually at the ceiling, earning a wink from the maintenance badger, which he sharply looked away from, conveniently no redder than he usually was)), he’d been given a desk near hers. Neither of them was much for sitting still and filling out files – Nick even confessed he’d barely held onto the patience to pass high school, despite his knack for dates and numbers – but both benefited from the presence of the other, tossing back and forth short-worded banter and sharp little laughs like popcorn in a kettle, sharing snacks, floating questions about forms and designations over a shoulder to the desk caddy-corner against the diagonally tangent cubicle wall, backs to each other.

An Appeal of Interest - lalaloopsie. As she got older, Judy’s future became a game of sorts. 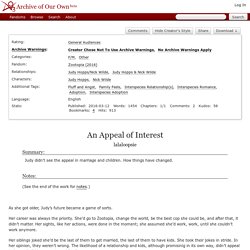 Love bite - Raptarion. Cultural Differences - DeadpoolIsMySenpai. It was getting cold in Zootopia. 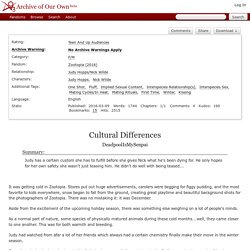 Stores put out huge advertisements, carolers were begging for figgy pudding, and the most favorite to kids everywhere, snow began to fall from the ground, creating great playtime and beautiful background shots for the photographers of Zootopia. There was no mistaking it: it was December. Aside from the excitement of the upcoming holiday season, there was something else weighing on a lot of people's minds. As a normal part of nature, some species of physically matured animals during these cold months...well, they came closer to one another.

This was for both warmth and breeding. Judy had watched from afar a lot of her friends which always had a certain chemistry finally make their move in the winter season. Even though she had reached maturity, Judy had never really been interested in finding a mate the way her friends were. Of course, Judy wasn't alone in thinking about the times. In the last few weeks, Nick hadn't been himself. "Huh? " A Desire to Please - DeadpoolIsMySenpai. Baby you don't have to rush - weatheredlaw. It takes six months for Bogo to take her half as seriously as she’d like him to – around then, she gets into the system, cracks a robbery, and decides she loves her neighbors, but is starting to grow out of her odd little box. 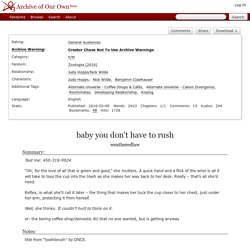 Clawhauser is thrilled. “You can live with me,” he says, and nearly falls over the edge of his desk. “I live so close. Jude. Judy-Jude.” She avoids a wave of sprinkles and napkins and raises her paws in surrender. Addition - JonnWood. ZOOTOPIA: Addition (spoilers) by Jon-Wood. 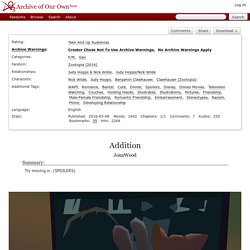 It Started with a Donut - pickyhandshake. Fear - Ragamuffins. It was interesting how much society as a whole tended to shy away from ‘fear’. Nick often wondered if things would have been different if fears were better addressed, or at least somewhat looked at, instead of brushed and swept under the proverbial rug. No one seemed to want to talk about what they feared; maybe it was some deep rooted mentality that made animals think they were weak. After all, once upon a time… weakness could get you killed. Moving Boxes - chaelip. Stubborn Love - dementedchris. Chapter Text Contrary to popular belief, remorse comes to Nicholas Wilde. He just doesn’t pay enough attention to it. Usually. Case in point: he regrets answering Carrots’ phone. The next time the dumb bunny is out on meter maid duties because Chief Bogo’s not in the mood for her creative reasoning, he’s going to just let her phone ring.

But maybe the sergeant’s just too loud or Clawhauser is too excited, because he doesn’t hear Nick’s “What?” And then there it was. Nick slams the phone down. So maybe he’s not really done with work but maybe a quick visit to the lobby was going to take the growl off his lips. “—never turns out this way,” Clawhauser is saying cheerfully. Zähmen (Tame) - Icka M Chif (mischif) Chapter Text That wasn’t blueberry juice staining Nick’s neck. Nick’s body convulsed under her paws, the muscles twitching almost unnaturally. From above the pit, Judy could hear Bellwether calling the police above them, reporting a savage fox at the Natural History Museum. It was one of the first things that they had drilled into them during weapons training, always know how much ammo you had in your gun, clear your gun and make sure there wasn’t one in the chamber. But Judy hadn’t been the one to switch the Night Howler pellets for blueberries, Nick had.

Let's finish that thought - floppybelly. A Mountain I'm Willing to Die On - Vera (Vera_DragonMuse) If i never meet you again - ErinHasse. Chapter Text Day 1 His anger does not fade – that stewing, red hot pit sitting in the middle of his stomach, brewing fire and shooting heat into his veins. Something like prayer - weatheredlaw. Never Know - wilddragonflying.