Star vs. The Forces of Evil

Two Demons are Better than One - nitoriangel. In every lost soul the bones of a miracle - DappledDragon. Becoming Marshmallow - Anchas_mind. Deny the Fluff - Spongecatdog - Star vs. The Forces Of Evil. In Tom’s defense, it was totally all Marco’s fault. 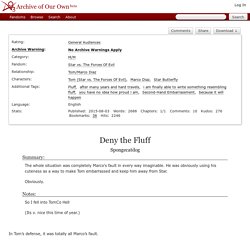 Really. It was. He swears. It had all started with Tom coming by the place where Star was currently living for the time being. Of course, there had been a brief moment of his irritation flaring up when he found out the human boy from the Blood Ball lived there as well, but Tom reached behind him to pet the bunny being carried by Brian, and all was fine again. When Star wasn’t near to see him do it, of course. The trouble had really started when he let Star hold his rabbit. Really though, how could he deny Starship anything if he knew her smile would follow? But yes, if Tom had to pinpoint a specific moment when things began to go wrong, it would have to be then. Tom thought he would be fine. After all, what could go wrong if a few seconds? Apparently, a lot could go very wrong in a few seconds.

Undeserving - MoonGirl1155 - Star vs. The Forces Of Evil. When Marco awoke he was drenched in sweat. 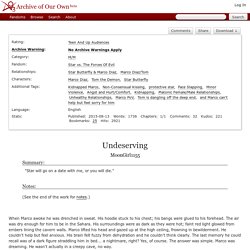 His hoodie stuck to his chest; his bangs were glued to his forehead. The air was dry enough for him to be in the Sahara. His surroundings were as dark as they were hot; faint red light glowed from embers lining the cavern walls. Marco lifted his head and gazed up at the high ceiling, frowning in bewilderment. Obsessed - Chapter 1 - hystericalmode - Star vs. The Forces Of Evil. Chapter Text Marco flinched a bit when the other demons in the underworld continued to whisper about him, as if he wasn’t actually there. 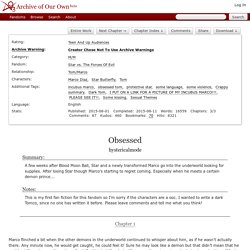 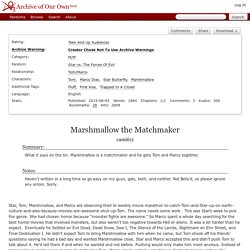 Chapter Text “Star, are you sure that this is such a good idea?” 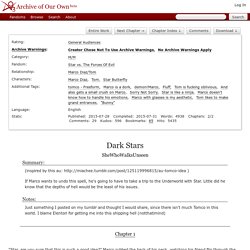 Marco rubbed the back of his neck, watching his friend flip through the pages of her book of spells. He definitely wasn’t nervous or anything about the plan. What could go wrong? Right? …Okay, he was totally nervous. Yeah, he wasn’t looking forward to this little adventure. “Relax, Marco, it’ll be fine!” “I mean, why do you need me to come with you anyway?” Star didn’t even look up from where she was reading the incantation.

Listen To Your Gut - IzzyR0ckz - Star vs. The Forces Of Evil. Marco had always listened to his gut; it was just an integral part of his life. 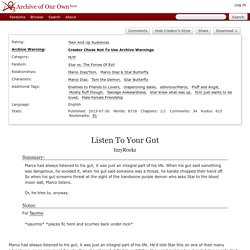 He'd told Star this on one of their many adventures, as an argument for why they should most definitely not follow the weird-looking two-headed demon into that scary-looking cave. She had just rolled her eyes at him and insisted he take risks more often instead of being a chicken. She then walked into the cave after lighting up her wand for illumination, leaving Marco to splutter indignantly and run to catch up. It was a trap, of course, and although they managed to escape with all their limbs intact, they also left with more than a few bruises, annoying Marco to no end and leaving him feeling vindicated in his earlier statement. He later wrote it down on a star shaped Post-it note which Star had given him, snickering, as a present: And stuck it on the ceiling above his bed as a reminder every morning.

My Princess - Evil_Ed6 - Star vs. The Forces Of Evil. Fire Safety is Important at a Bloodmoon Ball - Goshikku. Chapter Text “I told you to play this track!” 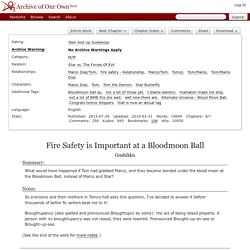 “Oh yes, sorry my Prince, I just thought this one would be better. The band, Screams of the Damned have really became popular again so I just….” “YOU WANT SCREAMS OF THE DAMNED? YOU’LL GET ENOUGH OF THEM WHEN I THROW YOU INTO THE RIVER STYX.” Lucky enough for the DJ, Brian seemed to notice what happened, and ran over to Tom, putting his hands on Tom shoulders and repeating phrases like, “Walk it off,” and, “Count to ten,” until Tom was both no longer engulfed by flames, and calm enough to hold onto a bunny without singeing it. Tom nodded his thanks to Brian, and turned back to the DJ, taking in a deep breath and stroking the bunny furiously. “I do not care what is ‘in’. The DJ who had already felt faint when Tom had started screaming at him, quickly agreed to all that Tom said, and began spewing apologies. Tom began to look for the Princess of Mewni, Star Butterfly, who he can’t believe actually agreed to come here with him. "Uh, Tom? Knotted Bond - DarkisAngell.

Not as Planned - Nekomiya. Soul Mates - SyllabusArtist. Soulbound - WishMaker7. Chapter Text I heard those words echoing through the speakers: “It is my pleasure that I request you now to turn your heads skywards, when the light of the blood moon bubbles down and selects two lucky souls, binding them for eternity in its hypnotic, ruby brodum.” 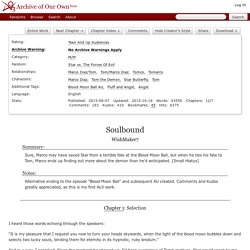 And in a way, I panicked. Since the moment he showed up, I’d been suspicious of Tom’s motives. Star would speak to me time and again what kind of a jerk he was for dumping her, his temperament, and all-in-all sour attitude. The one thing I knew I needed to do was to protect Star. From the piano, Tom seemed to be returning back to Star. He called her name gently as I wriggled out from between two girls. In a blur, I closed my eyes and pushed my hand out. And against my eyelids, a red light washed down on me. A hand had gripped my extended arm by the wrist, as if to grab hers, but had taken mine by mistake. Why… was he holding my hand? Bound for eternity…?! My breath hitched. “What’s wrong? “But…” I started in a small voice.

Of Demons and Nachos - Anchas_mind. Show Chapter. Consolation Prize - Chapter 1 - Lady_Papillon - Star vs. The Forces Of Evil. Chapter Text Inhumanly strong hands (that were also literally steaming) seized his shoulders, roughly slamming him against the wall at his back hard enough to make him gasp; the sound was immediately swallowed up by the pair of lips pressed against his own in a kiss that rendered him lightheaded and sent his heart rate spiraling out of control. 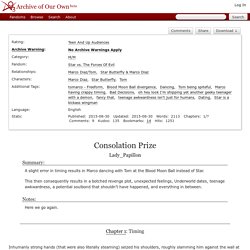 It was in that moment that Marco Diaz realized that he’d made a terrible mistake. Looking back, and rather unwilling to admit that his reluctance to leave Star Butterfly to her own devices for the evening might have been a bad idea, he decided the fault lay with timing. He’d often heard that timing was everything, and the platitude was something Marco generally agreed with. As Echo Creek Academy’s designated ‘Safe Kid’ and a devotee of organization he tended to care a good deal about things likepunctuality and proper scheduling. After a couple of seconds of listening further, Marco decided that the song kinda sucked after all.