After an afternoon - preromantics. "So," El says, gesturing with the remote in her hand, the television left blank, "how do you do it? 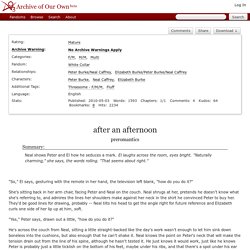 " She's sitting back in her arm chair, facing Peter and Neal on the couch. Neal shrugs at her, pretends he doesn't know what she's referring to, and admires the lines her shoulders make against her neck in the shirt he convinced Peter to buy her. They'd be good lines for drawing, probably -- Neal tilts his head to get the angle right for future reference and Elizabeth curls one side of her lip up at him, soft. "Yes," Peter says, drawn out a little, "how do you do it? " He's across the couch from Neal, sitting a little straight-backed like the day's work wasn't enough to let him sink down boneless into the cushions, but also enough that he can't shake it. Figuratively and hypothetically speaking, of course. "It comes naturally," Neal says, halfway into the start of a mostly comfortable silence. El laughs across the room, eyes bright. Note by note - preromantics - White Collar.

The first time Neal takes Peter's wallet goes way back before Peter even knew him beyond a name and a picture in a file he'd been assigned to. 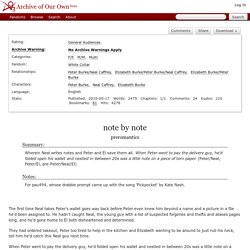 He hadn't caught Neal, the young guy with a list of suspected forgeries and thefts and aliases pages long, and he'd gone home to El both disheartened and determined. They had ordered takeout, Peter too tired to help in the kitchen and Elizabeth wanting to be around to just rub his neck, tell him he'd catch this Neal guy next time. When Peter went to pay the delivery guy, he'd folded open his wallet and nestled in-between 20s was a little note on a piece of torn paper. 'Better luck next time! ' it said, 'You look smarter than the rest. - NC' Peter had counted the money in his wallet ten times over and canceled his credit cards and froze his bank accounts, but nothing was touched.

It's all like a one-sided conversation that Peter feels a part of, but doesn't tell anyone about. Third Date - lightgetsin - White Collar. The Perils of a Complicated Relationship (In Space) - monj - White Collar. The first time Peter caught Neal Caffrey was almost entirely due to luck. 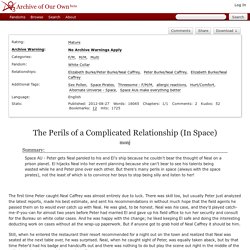 There was skill too, but usually Peter just analyzed the latest reports, made his best estimate, and sent his recommendations in without much hope that the field agents he passed them on to would ever catch up with Neal. He was glad, to be honest. Neal was his case, and they’d played catch-me-if-you-can for almost two years before Peter had married El and gave up his field office to run her security and consult for the Bureau on white collar cases. And he was happy with the change; he liked keeping El safe and doing the interesting deducting work on cases without all the wrap-up paperwork. But if anyone got to grab hold of Neal Caffrey it should be him.

Still, when he entered the restaurant their resort recommended for a night out on the town and realized that Neal was seated at the next table over, he was surprised. “Hello Neal. “Neal?” “She’s gone, Peter.” He awkwardly put away the equipment. “Peter.” “No.” Figure It Out - lightgetsin - White Collar. And you are the one who'll decide where you'll go. - be_a_rebel - White Collar.

Him to Me to You - lionessvalenti - White Collar. Elizabeth opened the top dresser drawer and started putting away clean socks. 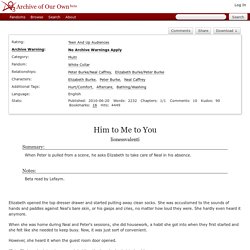 She was accustomed to the sounds of hands and paddles against Neal's bare skin, or his gasps and cries, no matter how loud they were. She hardly even heard it anymore. When she was home during Neal and Peter's sessions, she did housework, a habit she got into when they first started and she felt like she needed to keep busy. Now, it was just sort of convenient. However, she heard it when the guest room door opened. "Peter? " He walked into the bedroom, naked and sweaty, and made a beeline for the dresser and pulled out a pair of underwear. "Are you taking Neal? " Peter shook his head, reaching into the closet for a pair of trousers. "Take care of him? " "Yeah, you would," Peter said. "God, Peter, I don't know. " He buttoned up his shirt and tucked the tails into his pants. Elizabeth dropped her shoulders. "Thank you," Peter said, squeezing her hand. Neal nodded, never quite lifting his face from atop his knees.