To Do The Right Thing - Eleanor_Lambb. Ab Ovo - Saccharine_Ghosts. H̴̵̰̹̗̗̭̖͉̤̀͝a̵̴͖̠̦͓͘͟͝u͚͎̘̰̝͍͉͕͖̤̝͙͎̬̩͞͡͝ń̢̛͡͏̤̦̰̞t̸̶͍̤̞̦̘̦̱̪̦̮͉͘͡͡e̡̲̰͉͉̪̘̯̼̲̦̼̬̳̘̭͈̞͡ͅd̴̢̜̳̫̣͓̞̺̦͍̟̮͖͈̲̱͔̹ Apprehension was a feeling Miles had abandoned long ago, back in the first few years of his career as an investigative journalist. 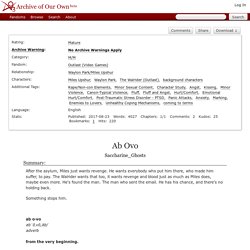 Maybe even before, he had always been the troublemaker during school, and in Afghanistan there was no time or place for apprehension of any sort, especially when he was getting reprimanded for his lashing out. So why did he feel apprehensive now? He could see the man, a few meters from where he stood, buying a coffee with eyes trained to his scuffed sneakers and shoulders hunched to make himself as small as possible, not that he needed to be any smaller. Stress Relief - emmawicked. Wiles - EchoedAshes. Waylon panted as Miles harshly flipped him, “Face down ass up.” 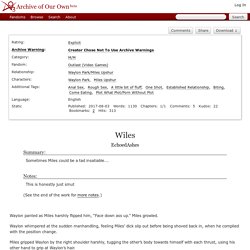 Miles growled. Waylon whimpered at the sudden manhandling, feeling Miles’ dick slip out before being shoved back in, when he complied with the position change. Miles gripped Waylon by the right shoulder harshly, tugging the other’s body towards himself with each thrust, using his other hand to grip at Waylon’s hair. Thoughts. - whatsupshur - Outlast (Video Games) Staring up towards the peeling plaster that clung desperately onto the ceiling, Miles let out a loud sigh. 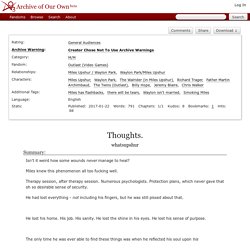 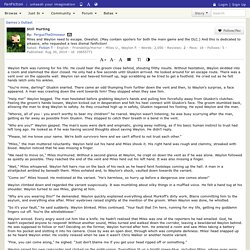 He could hear the groom close behind, shouting filthy insults. Without hesitation, Waylon skidded into a room and slammed the door closed. He only had a few seconds until Gluskin arrived. He looked around for an escape route. There was a vent over on the opposite wall. "You're mine, darling! " "Help me! " "Whores, all of you - you aren't worthy to bear my children! " "Who are you? " Undone - kelly54me. AN: alright, chapter 1 of ? 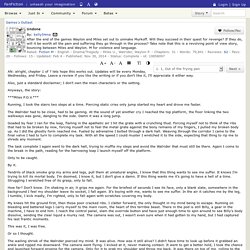 Lets hope this works out. Updates will be every Monday, Wednesday, and Friday. Leave a review if you like the writing or if you don't like it, I'll appreciate it either way. Also, just a standard disclaimer; I don't own the main characters or the setting. Anyways, the story: Colorado Ghoul - Needle_Bones. Miles let the door slam, panic coursing through him in a cold, ugly flood. 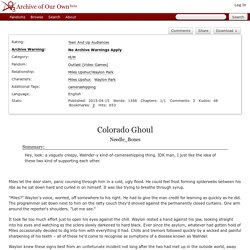 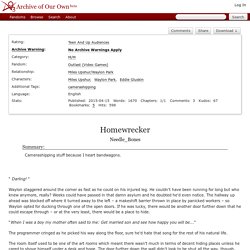 ” Waylon staggered around the corner as fast as he could on his injured leg. He couldn't have been running for long but who knew anymore, really? Weeks could have passed in that damn asylum and he doubted he'd even notice. The hallway up ahead was blocked off where it turned away to the left – a makeshift barrier thrown in place by panicked workers – so Waylon opted for ducking through one of the open doors. “When I was a boy my mother often said to me: Get married son and see how happy you will be...” The programmer cringed as he picked his way along the floor, sure he'd hate that song for the rest of his natural life. The room itself used to be one of the art rooms which meant there wasn't much in terms of decent hiding places unless he cared to shove himself under a desk and hope. Waylon had a decent lead on The Groom so he stopped near one of the tables, bracing his hands on the worn surface, breathing too hard.

“There you are, Darling!” Little Things - Basic_Spirit. Through dark and light I fight to be - mindofaddict. No one will know it but me - malatruse. I sleep, but mine heart waketh - XellyChan. Accident - Walor. It really shouldn’t be all that surprising. 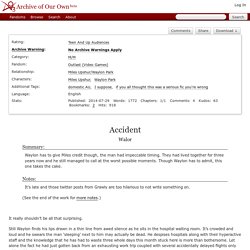 Still Waylon finds his lips drawn in a thin line from awed silence as he sits in the hospital waiting room. It’s crowded and loud and he swears the man ‘sleeping’ next to him may actually be dead. He despises hospitals along with their hyperactive staff and the knowledge that he has had to waste three whole days this month stuck here is more than bothersome. Let alone the fact he had just gotten back from an exhausting work trip coupled with several accidentally delayed flights only adds to his rising irritation.

Yet, he was still surprised. Waylon has to give Miles credit though, the man had impeccable timing. “Mr. Waylon snaps out of his daze at the nurse’s voice when it cuts across the obnoxious waiting room chatter. “I told him he wasn’t the only one here for the same reason.” Waylon doesn’t have the energy left for joking sarcasm so he just grunts in affirmative, he’s sure the dark circles speak for themselves. Buffer Overflow - TheCorvid. An Unexpected Encounter - raunchygatr. Nightmares - Midnite521. A More Concrete Faith - Shorknado. Keep The Streets Empty For Me - Razzledazzy. Smoke Chewer. his tongue and liver - (doubleinfinity) 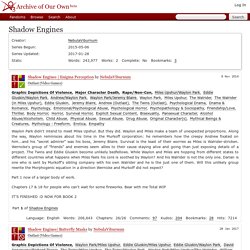 But they did. Waylon and Miles make a team of unexpected proportions. Along the way, Waylon reminisces about his time in the Murkoff corporation: he remembers how the creepy Andrew fixated on him...and his "secret admirer" was his boss, Jeremy Blaire. Survival is the least of their worries as Miles is Walrider-stricken. Wernicke's group of "friends" and enemies seem allies to their cause staying alive and going than just exposing details of a project. Enigma Perception - NebulaViburnum. Waylon Park didn't intend to meet Miles Upshur. 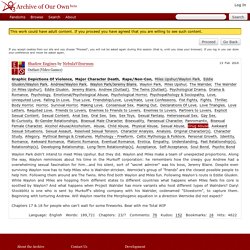 But they did. Waylon and Miles make a team of unexpected proportions. Along the way, Waylon reminisces about his time in the Murkoff corporation: he remembers how the creepy guy Andrew had a overwhelming sexual fascination for him...and his silent, sort of "secret admirer" was his boss, Jeremy Blaire.