A Stitch in Time Saves What's Mine - Skaii. KaneKane Week - Spongecatdog. Pleasant Moments - Spongecatdog. A/N: Tbh, I don't know if I will ever stop until i have written a story about Kaneki with every male character. 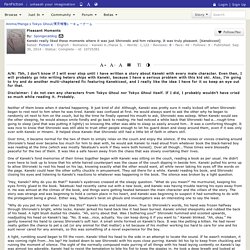 Even then, I will probably go into writing hetero ships with Kaneki, because I have a serious problem with this kid oki. Also, I'm going to try and do another multi-chaptered fic featuring Kanekicest, and I really like the idea I have for it so keep an eye out for that. Disclaimer: I do not own any characters from Tokyo Ghoul nor Tokyo Ghoul itself. If I did, I probably wouldn't have cried so much while reading it. Probably. Neither of them knew when it started happening. Over time, it became normal for the two of them to simply relax on the couch and enjoy the silence. One of Kaneki's fond memories of their times together began with Kaneki was sitting on the couch, reading a book as per usual. "Hey, Kaneki? "Why do you pet my hair when I lay like this? 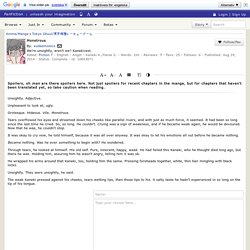 Not just spoilers for recent chapters in the manga, but for chapters that haven't been translated yet, so take caution when reading. An Overheated Imagination - Neaki. Shattermind - grayangel19. “How much does it hurt?” 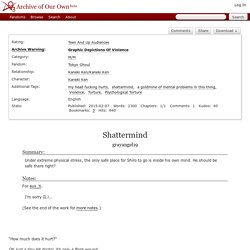 Oh just a tiny bit doctor, it’s only a flesh wound. The man who had been torturing Shiro for the past 17 hours raised his scalpel, soaked in the blood and muscle of Shiro’s arm. “I asked you… how. much. does. it. hurt?” Each word brought a new cut into Shiro’s arm. It didn’t hurt so much anymore. “Quite a lot thanks for asking.” If he ever got out of this Shiro wasn’t going to waste his time torturing this filth. Lonely? Shiro’s train of thought was violently derailed by breaking of his femur. “No thinking about happier places. Shiro wished he could heal, anything to fix the pain in his leg. Lost & found - sakigami. Hide’s plans were always … creative, to say the least. 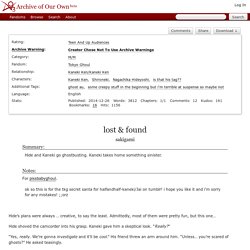 Admittedly, most of them were pretty fun, but this one… Hide shoved the camcorder into his grasp. Kaneki gave him a skeptical look. “Really?” Ii - shirotani. Cold Hands - marenbox. The quiet buzzing of the coffee maker was the only sound filling the apartment while Kaneki waited for his coffee, the shadowy atmosphere of the room lifting slowly as time passed. 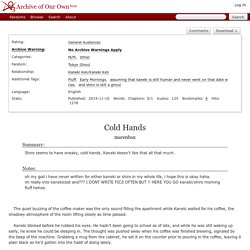 Kaneki blinked before he rubbed his eyes. He hadn't been going to school as of late, and while he was still waking up early, he knew he could be sleeping in. The thought was pushed away when his coffee was finished brewing, signaled by the beep of the machine. Grabbing a mug from the cabinet, he set it on the counter prior to pouring in the coffee, leaving it plain black as he'd gotten into the habit of doing lately. About to sip the hot drink, he paused, letting out a little whimper when he felt arms wrap around him, particularly cold hands holding his sides. "Mm, good morning Kaneki... " was the greeting he got from Shiro, voice laced with drowsiness as he'd just gotten up. Forbidden Fruit - Hyoushin. Patience - aus_ti. Just wait. 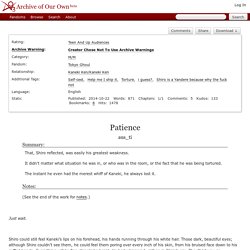 Shiro could still feel Kaneki’s lips on his forehead, his hands running through his white hair. Those dark, beautiful eyes; although Shiro couldn’t see them, he could feel them poring over every inch of his skin, from his bruised face down to his cuffed hands. Ways of the Fall - CreptFromTheAbyss. Somnium - Hyoushin. Chapter Text At best, it was only annoying; at worst, it was truly maddening. 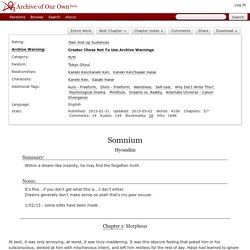 It was this obscure feeling that poked him in his subconscious, winked at him with mischievous intent, and left him restless for the rest of day. Haise had learned to ignore that constant and insistent feeling until it ebbed into a miniscule—nearly non-existent—discomfort. Neither with you nor without you - Saenshi. Chapter Text “Flower man, flower man!” 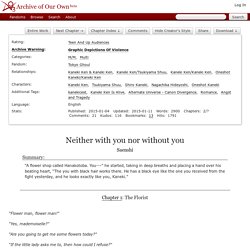 “Yes, mademoiselle?” “Are you going to get me some flowers today?” “If the little lady asks me to, then how could I refuse?” “Thank you!” Kaneki Ken would not consider himself to be the protagonist of a novel; rather, he would consider himself a background character, especially in the novel of his life. Kaneki passed a bouquet of various flowers to the customer over the counter, ringing him up and thanking him for his service. The Twelfth Day - aus_ti. KaneKane Week Collection - RahDamon.