I'm the Chip You're the Dip - ab2fsycho - Gravity Falls. If You Insist - JusticeHawk - Gravity Falls. Bill glanced up from the book he was reading as a loud thud sounded throughout the shack followed seconds later by a shout of, "Oh fuck me! 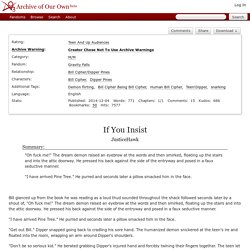 " The dream demon raised an eyebrow at the words and then smirked, floating up the stairs and into the attic doorway. He pressed his back against the side of the entryway and posed in a faux seductive manner. "I have arrived Pine Tree. " He purred and seconds later a pillow smacked him in the face. "Get out Bill. " "Don't be so serious kid. " Dipper scowled up at him as the demon's chest pressed flush along his back. "Sure you did kid. " Say It - JusticeHawk - Gravity Falls. Tumbles of grey streaked across the sky, the grass, the everything. 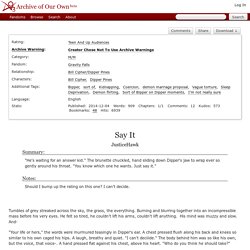 Burning and blurring together into an incompressible mass before his very eyes. He felt so tired, he couldn't lift his arms, couldn't lift anything. His mind was muzzy and slow. And- The Definition of Molestation - JusticeHawk - Gravity Falls. Dipper squinted down at the papers scattered about his desk, his eyes straining to find something, anything amongst them. 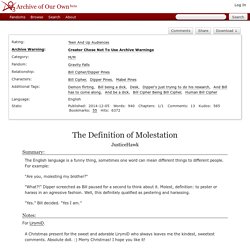 "There has to be a connection. " He muttered bending further over the wood, brown eyes glaring at the apparently offensive pieces of paper. His hands clenched atop the tabletop in sheer frustration and after a moment he sighed and thunked his forehead against the table. "This is getting me nowhere. " The brunette grumbled. He yelped as a heavy weight dropped across his back, forcing his upper body to collide with the table. Fun in Vegas - SpyroForLife. What a Jealous Little Dorito - Alopex. Bill much preferred sophisticated gatherings of intellectuals, but, given his youthful disguise and on account of getting to know his newest victi- er, friend, was forced to endure the congregation of hormone-fueled teenagers. 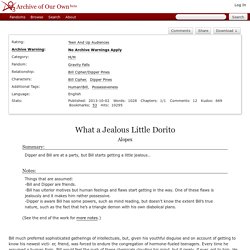 Every time he assumed a human form, Bill would feel the rush of these chemicals clouding his mind, but it rarely, if ever, got to him. He still wasn’t sure why Dipper had dragged him out to the party - he never seemed like the type to engage in the party scene, and Bill himself didn’t care much for large boisterous groups, but after much convincing and talk of girls, he relented and accompanied Dipper to the party. Relax and Do it - press05. A Little Assistance - Alopex - Gravity Falls. Woodland Romp - Alopex - Gravity Falls. The golden sunlight filtered through the sap green needles of the towering redwoods, causing everything in the park to glow.

The afternoon, not too cold yet not too hot, with just the right amount of breeze, was perfect for a myriad of activities. For some, like Mabel, it meant prancing around with her friends and storming all of the cute boys that happened to be passing by. Soos ended up completely distracted by the bushy-tailed squirrels in the park, and was unfazed even when they bit his finger instead of the peanuts he offered them. For Dipper, this meant finding a quiet, secluded bench to read for a few hours. Dipper couldn't ask for more. "Watcha readin,' Pine Tree?

" Dipper jumped with a squeak. "Oh, I'm a master of stealth. The boy was a little taller than Dipper, was almost unnaturally bony, and had golden hair that looked as if it swept back into a tapered point naturally. After moments of hesitating, Dipper finally took the offered hand, slightly surprised at how warm it was. Beep beep? Vroom vroom. - Alopex - Gravity Falls. The Butt - Grotesque (Grotesque_Flower) - Gravity Falls.

Bill was sitting carelessly sprawled out on the living room floor, nothing to be doing as he hung around the mystery shack. 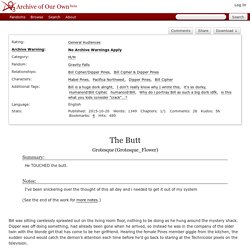 Codependance - Ciphernetics - Gravity Falls. Bill, the Boy, and the Body - thelinksthatconnectus (orphan_account) Marco Polo - EnderQueen. Chapter Text It was a quiet day in the Mystery Shack, the sun was already setting and the tourists were now all gone. 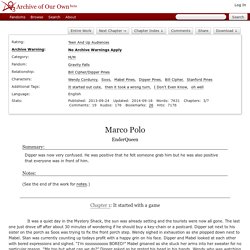 The last one just drove off after about 30 minutes of wondering if he should buy a key-chain or a postcard. Dipper sat next to his sister on the porch as Soos was trying to fix the front porch step. Wendy sighed in exhaustion as she plopped down next to Mabel. Stan was currently counting up todays profit with a happy grin on his face. “What about you Dipper? Dipper sighed as Wendy tied the blindfold on him. 10 minutes later Dipper was still it. “Dipper stay still.” “Dude!” “What is that thing?!”

“Let go of my brother!” “Let my nephew go before I rip you to shreds!” Dipper opened his eyes to see a tall lanky man in a suit. “How are ya feeling Pine Tree?” “STOP!” “I would say that I would love to stay and chat but I would hate it. As the flame moved Bill took in some pleasure as Dipper screamed and cried as well as struggled to get out of this predicament. Rules and Punishments - Lucy_Ely07. The One With a Demon-Genie - Chaotic_Mira. Only His - RandomUsername13. A Deals a Deal - Diamond. Chapter Text “I’m going to lose everything? 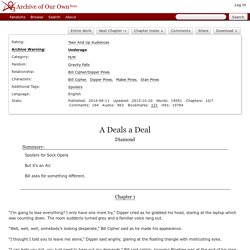 I only have one more try,” Dipper cried as he grabbed his head, staring at the laptop which was counting down. The room suddenly turned grey and a familiar voice rang out. “Well, well, well, somebody’s looking desperate,” Bill Cipher said as he made his appearance. “I thought I told you to leave me alone,” Dipper said angrily, glaring at the floating triangle with mistrusting eyes. “I can help you kid, you just need to hear out my demands,” Bill said calmly, knowing Pinetree was at the end of his rope.

Dipper groaned in frustration. “Yeesh kid, relax. “A puppet?... “Everyone loves puppets, and it looks to me like you got a surplus,” Bill said, moving the hand puppets around, playing with them and putting one on Dipper. “I...I don’t know man, Mabel worked really hard on these,” Dipper answered looking unsure. Bill had to give Pine Tree credit, most people wouldn't put their siblings first, especially over something as pointless as a puppet. The 30 Chapter - Sin Grotesque (Grotesque_Flower) An Empty Shadow Filled with Gold - Nexie. 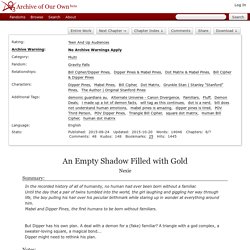 The animals that stayed by everyone’s sides were a part of everyday life.