I was born for this - esama. Courting Assassins Chapter 1: Not In The Bureau, an assassin's creed fanfic. Title: Courting Assassin's Disclaimer: I don't own AC Warnings: yaoi and an annoyed Malik Authors Note: There's no sex in this chapter and I've left it alone for long enough that I'm not sure I'll even write the sequel so for now I'm going to leave it as a oneshot and if I get down to writing Altair raping Desmond on a rooftop I'll post it. 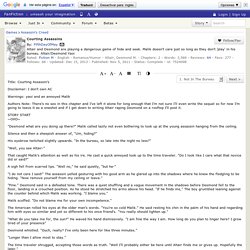 "Desmond what are you doing up there? " Malik called lazily not even bothering to look up at the young assassin hanging from the ceiling. Silence and then a sheepish answer of, "Um, hiding? " His eyebrow twitched slightly upwards. "Well, you see Altair-" That caught Malik's attention as well as his ire. A sigh fell from scarred lips. "I do not care I said! " "Fine. " The Eagle and the Jay - Siana. Frozen - Xazz - Assassin's Creed. Stone Angel - esama. Guardians of the Future - Protozoaneo84. Disclaimer: Assassin's Creed ™ and its characters belong to Ubisoft. 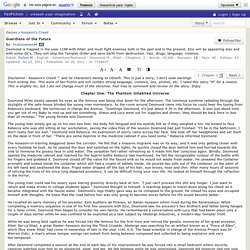 This is just a story; I don't seek earnings from writing this. This work of fan-fiction and will contain strong language, violence, sex, alcohol, etc. I rated this story "M" for a reason. This is slightly AU, but I did not change much of the storyline. Feel free to comment and review on the story. Chapter One: The Phantom Inhabited Universe Desmond Miles slowly opened his eyes as the Animus was being shut down for the afternoon. The young man slowly got up on his own two feet. The Assassin-in-training staggered down the corridor. The young man could see his weary eyes staring gloomily directly back at him. He recalled an early memory of his ancestor, Ezio Auditore da Firenze; an Italian Assassin whom lived during the Renaissance.

After Desmond completed a session at the end of each day of his imprisonment he was forced into a small bedroom where security cameras watched over him as he showered, slept, and ate. "Lucy! Shadow Assassin - Goldrose18. Disclaimer: I don't own anything assassins creed belongs to its creators who are geniuses The ceiling look as if it would cave in at any time but then again the Villa Auditore was over 700 years old. 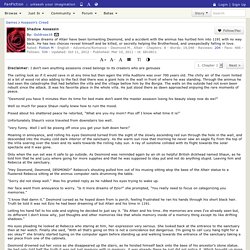 The chilly air of the room hinted at a bit of wood rot also adding to the fact that there was a giant hole in the wall in front of where he was standing. Through the animus he had seen the catastrophe that had befallen the villa and the village bellow him by the Borgia. The walls on the outside had not even been rebuilt since the attack. All In My Head - silvermoon170. Title: Its All in My Head.Author: Potatocrumbs/Silvermoon170Pairing: Desmond/AltaïrSummary: Altair's Version of appearing in Desmond's bed uninvited and very frustrated. 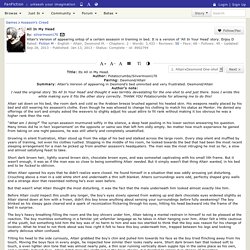 Desmond/AltaïrAuthor's note:I read the original story 'Its All In Your Head' and thought it was terribly devastating for the one-shot to end just there. Sooo I wrote this while making sure it fits the other story correctly. THANK YOU Potatocrumbs for allowing me to do this! Altair sat down on his bed, the room dark and cold as the Arabian breeze brushed against his heated skin. His weapons neatly placed by his bed and still wearing his assassin's clothe. "What am I doing? " Growling in silent frustration, Altair stood up from the edge of his bed and stalked across the large room. Short dark brown hair, lightly scared brown skin, chocolate brown eyes, and was somewhat captivating with his small lith frame.

When Altair opened his eyes that he didn't realize were closed. "Altaïr...? " "H-hey! " حبي للحفظ - PharaohIsis13EgyptianYaoiLover. Disclaimer: I DON'T own Assassin's Creed or It's Characters. 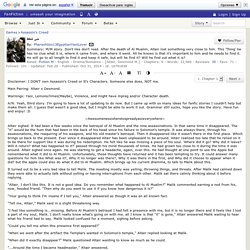 Someone else does, NOT me. Main Pairing: Altair x Desmond. Warnings: Yaoi, Lemons/limes(Maybe), Violence, and might have mpreg and/or Character death. A/N: Yeah, third story. I'm going to have a lot of updating to do now. ~Awesomenessisheretospreadyaoieverywhere~ Altair sighed. It turned out to be a very bad idea to tell Malik. Binary Duality - nikaris. Inheritance - JustWanted89. Will you be there when the sun shines no more? 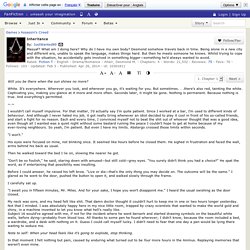 White. It's everywhere. Wherever you look, and wherever you go, it's waiting for you. Coming Down to Earth - ZusupaTanhi. Circadian Rhythm - hexagonalslugs.