Skeleton Squatters and the Landlady

Skeleton Squatters and the Landlady - Tyrant_Tortoise. Chapter Text Questionable decisions were kind of your thing. 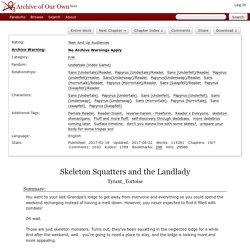 Why else would you be picking your way through the woods in the middle of the night, one hand holding your phone as a flashlight and the other clasped around the simple keyring in your pocket? Heading out here at night was definitely questionable; it was what happened in horror movies before the mass murderer popped out from behind the trees with an ax. Those kind of thoughts creeped you out, so you decided to block them by reflecting over why you were headed out here in the first place. You had to get away. Your divorced parents were bickering about your sibling, constantly calling you about some new drama in their life--that would somehow end up having to do with you.

Your grandfather had owned a rather large lodge in the woods, one that your family had been trying to sell for as long as you remember. You just needed to use it for a night or two, long enough to clear your head and de-stress. Something was on it. Skeleton Shenanigans and the Landlady (SSLL Bonus Chapters) - Tyrant_Tortoise. Chapter Text Stretch hung up the phone, his body tense. 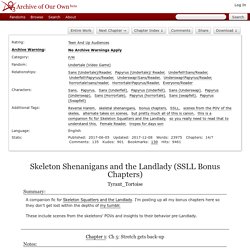 He kept reading over Blueberry’s text over and over, which pointed out that something was amiss at your house. He was just as surprised as his brother to discover that you had a boyfriend; after all, you hadn’t mentioned him and hadn’t even kept your phone on you. No one had pushed you as to why you were at your Grandpa’s lodge in the first place–even though they had each let their imaginations run wild–and you had never volunteered the information. And that, coupled with the fact that Blueberry could hear you arguing with your boyfriend in another room, set off so many red flags. Stretch took a shortcut from the woods (where he’d been checking his brother’s puzzles for any sign of him) back to the lodge. Skeleton Ex Machina - joliemariella. Chapter Text The day dawns dark and rainy, and though you wake at your usual hour, you quickly drift right back off again. 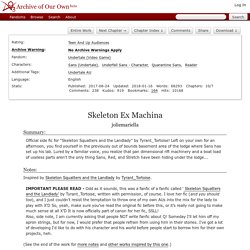 The heavy patter of rainfall on the skylight over your bed ushers you into dreamland more effectively than any lullaby, and it's not until a few hours later that you finally manage to drag yourself from your bed's warm embrace. You hear Sans and Red talking downstairs as you make your way to the bathroom, and though you can't quite make out what they're saying, there's little to be done about the way the warm bass of their voices carry despite the fact that they're obviously trying to keep the volume down. You smile a little at their efforts and close the bathroom door behind you, then set about your morning (well, closer to afternoon now) ablutions. When you finish, you head back to the loft to get properly dressed, and hear the front door shut. “Sans?” “down here, sweetheart,” he says. The basement door. “i forgot something,” Sans replies ruefully. “Good to have... You've Got A Friend In Me - KarmicRetribution. Chapter Text Papyrus knew he made the others nervous. 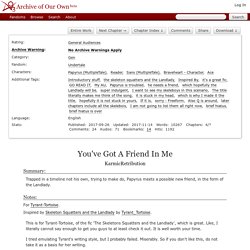 He was a Papyrus, but not Papyrus enough. And it wasn't like his universe was swapped, like Stretch and Blueberry's. He knew that because Alphys was the Royal Scientist and Undyne was Captain of the Royal Guard. He looked almost exactly like the Papyrus of this timeline. It… hurt, that they expected his brother to help them. An alarm clock goes off, and Papyrus wakes up, not that he needs it. The cabin they share is a lot smaller than what they're used to, and the kitchen is woefully under-furnished. Breakfast is a quiet affair. "nah, i'm going to the store today. " Papyrus' grip on his spoon tightens almost imperceptibly. Sans notices. Papyrus looks down at his oatmeal, then back up at Sans, a smile on his face.

Sans sighs, but doesn't press it. He probably took a short cut as soon as he got outside. Grabbing the tools he needs, Papyrus heads outside. Not for the first time, he wishes Bravery was here. Maybe she thinks they dusted? Skeleton Squatters and the AU - joliemariella. Bones, Picked Clean - lulu-writes (luluwrites) Chapter Text Stumbling drunk into the forest was admittedly not your latest stellar move. 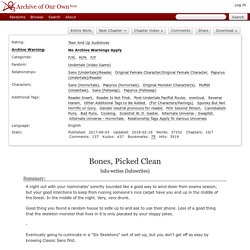 Sure, it's seemed smarter than losing the contents of your sparse dinner (consisting of tiny finger foods the sorority your roommate was a part of had put out to make the college party way more classy than it was) on the shoes of a girl with the prettiest brown eyes. In the moment? Sound decision. Now, after realizing that you were drunk enough for the forest to spin a bit? “Okaaay.” On that train of thought, you pull your phone out, holding down the power button in a ragdoll’s grasp. The trees grow thicker around you, which you take as, understandably, a bad sign. Hands on your knees and knees shaking, you realize that, if you didn't want to confront the suddenly very real possibility of dying alone in the woods, you have to keep moving. A house. Relief washes over you, followed by thin terror, followed by acceptance. Limitations - ink31. The Domestic Model - joliemariella. You’ve had a long day out and about running errands, but the sheer relief you feel coming home at long last makes it all worthwhile. 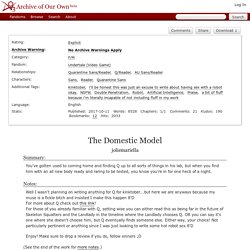 You drop your purse onto the little table under the coat rack and kick off your shoes with a relieved sigh before turning your attention to the relative quiet of your home. You’ve lived here for awhile now, and you’ve never been happier. Your house is in an older, quiet neighborhood just a few minutes walk from a nice, pedestrian friendly downtown area with lots of shops and restaurants that you frequent with your boyfriend. When the pair of you first bought the house you’d attracted a lot of attention every time you’d taken a stroll, but nowadays people hardly bat an eye at you and your six and a half foot tall robot skeleton boyfriend. Well, he isn’t technically a robot. Said home had gone through a lot of renovations when you’d first moved in together, though very little of it had been done to the main living area, or even the exterior.