The far cities are beautiful and bright - renquise. Alone in the Dark - anxiousAnarchist. Sometimes, when you have nightmares about Sburb, you think you have them about the wrong things! 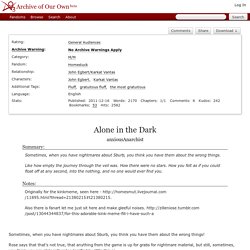 Rose says that that's not true, that anything from the game is up for grabs for nightmare material, but still, sometimes, you think you are all together too terrified by little things. Like how when you looked at Jack Noir it wasn't so much that he was a dark be-winged devil as he was an absence of light. Or how when you perched on the edge of the cliff in LOWAS and looked at the dark sky you thought, this might be the last thing I ever see. How the inky nothing around your house when the game first started seemed to expand to fill the whole universe, how it made you feel like everything you knew could fall over at any second. (and how everything did) How empty the journey through the veil was. Sleep Still - Aequoria. John's eyes are closing and it's barely past midnight. 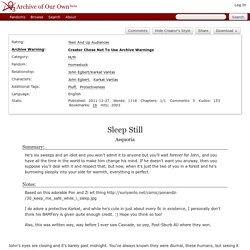 And a hundred percent reason to remember the name - callunavulgari. As it turns out, the humans aren’t as peaceful when they feel that their planet is threatened. 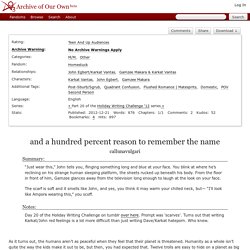 Humanity as a whole isn’t quite the way the kids make it out to be, but then, you had expected that. Twelve trolls are easy to hide on a planet as big as the earth, so they do what they have to in order to survive. Vacillation - daftalchemist. Used to This - Chronostimer. You could find a million things to dislike about John Egbert, but in the end he was still yours. 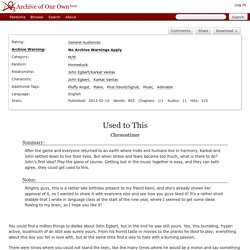 Yes, this bumbling, hyper-active, loudmouth of an idiot was surely yours. From his horrid taste in movies to the pranks he liked to play; everything about this boy you fell in love with, but at the same time find a way to hate with a burning passion. There were times where you could not stand the teen, like the many times where he would be a moron and say something absolutely ridiculous. Yet, the times where you loved your fellow leader seemed to be found more often, such as now when you were leaning ever so slightly on his side as he lost himself in the music he was content with making.

With a sigh you let a rare smile, or what could be considered a smile for it was much more of a smirk, grace your face. You could get used to this. => Be John the human. Sour Candy Endings - Gear_King. It said something about John Egbert that he was twenty-one, had not inconsiderable social skills, and was spending Friday night sprawled on his best friend’s couch while said best friend--Dave--giggled with his girlfriend in the kitchen. 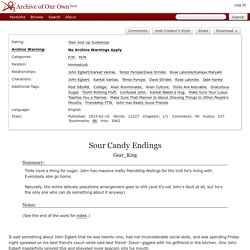 One John Egbert masterfully ignored this and shoveled more popcorn into his mouth. “Guys, you’re missing the best part,” he commented. More giggling. Were they ignoring him? John had the sneaking suspicion that they were. John glanced over the back of the sofa and… yep, that was whipped cream. He turned back to the television and didn’t think about it again. Even if it is a weird, whipped cream macking? Even then. He was in physics and immunology with Rose—his other best friend; John had been graced with an assortment of best buddies—so they spread all their textbooks out on the floor and crammed together before exams. Basically, John had good friends. Aw, that was kind of cute. Rose and Kanaya kept doing the candy exchange all evening. Tears were shed. Oh. Let's Tell a Christmas Tale - MadDub. John had always loved the Christmas season. 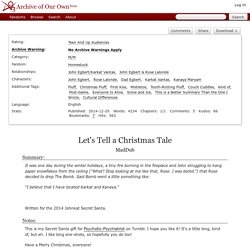 He loved hanging shining, multicolored lights from every surface in the house; loved the whispered promises of wrapped presents sitting quietly in a pile; loved the powder-white snow that crept across the ground and offered immediate snowball ammo anytime, anywhere; loved snowmen and snow angels and pink cheeks and scarves; loved to flee back indoors for blankets and hot chocolate. There was simply nothing to not like about Christmas! This year would be different from other years, however. The game did a lot of damage, not the least of which was the destruction of Earth and Alternia, leaving the humans and trolls to a gathering of new planets—mostly the humans’ planets at this point. This meant there would be no Black Friday shopping, no cute Christmas TV commercials, no groups of people caroling at random doorsteps. At least everyone was alive again. “John, I have some news to share with you.” Worth It - zzzzzzzo. 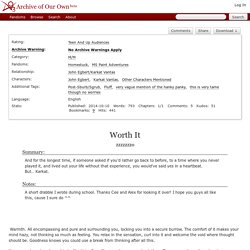 All encompassing and pure and surrounding you, locking you into a secure burrow. The comfort of it makes your mind hazy, not thinking so much as feeling. You relax in the sensation, curl into it and welcome the void where thought should be. Goodness knows you could use a break from thinking after all this. You remember when it used to be like this often. Errotic Popsicles - MadDub. The Land of Frost and Frogs swirled underneath John in a kaleidoscope of color, ironically hot and green for a planet that had once been cursed with ice and snow. 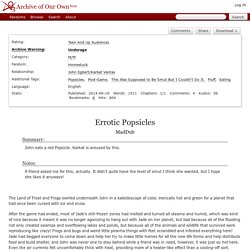 After the game had ended, most of Jade's still-frozen zones had melted and turned all steamy and humid, which was kind of nice because it meant it was no longer agonizing to hang out with Jade on her planet, but bad because all of the flooding not only created swamps and overflowing lakes and ponds, but because all of the animals and wildlife that survived were reproducing like crazy! Frogs and bugs and weird little piranha things with feet scrambled and infested everything here! Jade had begged everyone to come down and help her try to make little homes for all the new life forms and help distribute food and build shelter, and John was never one to stay behind while a friend was in need, however, it was just so hot here.

John couldn't say he wasn't excited. The others weren't faring much better. "I have Popsicles! " "John! " Love, Beds, And Other Strange Human Things - shippingmyarmada. You slip off your jeans and sweater, shimmying into the bed. 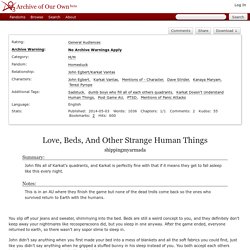 Beds are still a weird concept to you, and they definitely don't keep away your nightmares like recooperacoons did, but you sleep in one anyway. After the game ended, everyone returned to earth, so there wasn't any sopor slime to sleep in. John didn't say anything when you first made your bed into a mess of blankets and all the soft fabrics you could find, just like you didn't say anything when he gripped a stuffed bunny in his sleep instead of you.

You both accept each others habits because you know what its like to feel that way. John slips his pale arms around your waist, no longer surprised to find the raised red scars from the legs you had as a wriggler, no longer afraid to grip to tight, no longer amazed at your lack of what humans call nipples and belly buttons. Lost and Found - MsMonochrome. Chapter Text They stood in front of the door, the ones who were left anyway. 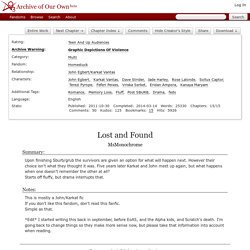 They were battered and bloody, breathing heavily as they stared at the person before them. Doc Scratch, in his white suit, his freaky cue-ball head shining in the Alternian sun. If he'd had a mouth he would have been smiling for sure. Of Breath and Blood - ClintFuckingBarton. Hands clasped over his legs as he rested his chin against his knees. The air was cold. The ground, though, was uncharacteristically warm. Or maybe it wasn’t uncharacteristic. Maybe he was just thinking that it was. Never Too Late - TheOrgasmicSeke. Time has run out for me... So goodbye, and I'll miss you And I'm sorry... but this is my fate.

Don't cry over me. I'm not worth any tears. The world spun, the wind blowing white puffy clouds around a vast blue sky that surrounded the one solid rock platform in the entire universe. The game had been won. The World's Greatest First Love - The John Egbert Affair - Chichirinoda. Cold Treats - wittykitsune.