How Does Caffeine Affect ADHD. The caffeine in coffee may be the just-right boost you need to help focus. 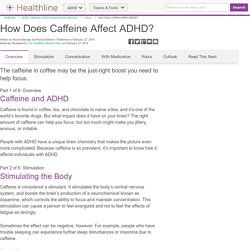 Part 1 of 6: Overview Caffeine and ADHD Caffeine is found in coffee, tea, and chocolate to name a few, and it’s one of the world’s favorite drugs. But what impact does it have on your brain? The right amount of caffeine can help you focus, but too much might make you jittery, anxious, or irritable. People with ADHD have a unique brain chemistry that makes the picture even more complicated. Part 2 of 6: Stimulation Stimulating the Body Caffeine is considered a stimulant. Sometimes the effect can be negative, however. Reduced Sleep Sleep deprivation can cause ADHD-like symptoms. Irritabilityincreased forgetfulnesstrouble focusing or sitting stilldifficulty controlling emotions Sleep deprivation makes these symptoms worse in people with ADHD. People with ADHD should only use caffeine in the morning and should avoid consumption of coffee, tea, soda, or chocolate in the evening or late at night.

Reduced Blood Flow to the Brain. How Does Caffeine Affect ADHD. Under Stimulated from Low Dopamine. In the desert without water The science is pretty clear on this, that in ADHD we lack dopamine (and probably have wider variations of nor-adrenaline/nor-epinephrine too which accounts for our variations in hyper/slothful activity). 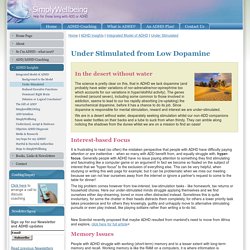 The genes involved (around seven), including some common to those involved in addiction, seems to lead to our too rapidly absorbing (re-uptaking) the neurochemical dopamine, before it has a chance to do its job. The Science of Motivation: Your Brain on Dopamine. The Likely Cause of Addiction Has Been Discovered, and It Is Not What You Think  It is now one hundred years since drugs were first banned — and all through this long century of waging war on drugs, we have been told a story about addiction by our teachers and by our governments.

This story is so deeply ingrained in our minds that we take it for granted. It seems obvious. It seems manifestly true. Until I set off three and a half years ago on a 30,000-mile journey for my new book, Chasing The Scream: The First And Last Days of the War on Drugs, to figure out what is really driving the drug war, I believed it too. But what I learned on the road is that almost everything we have been told about addiction is wrong — and there is a very different story waiting for us, if only we are ready to hear it.

If we truly absorb this new story, we will have to change a lot more than the drug war. I learned it from an extraordinary mixture of people I met on my travels. I had a quite personal reason to set out for these answers. Understanding Addiction. Dopamine - A Sample Neurotransmitter Regulation of dopamine plays a crucial role in our mental and physical health. 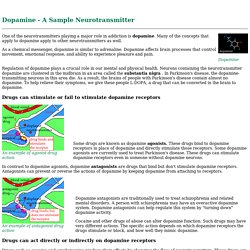 Neurons containing the neurotransmitter dopamine are clustered in the midbrain in an area called the substantia nigra . In Parkinson's disease, the dopamine- transmitting neurons in this area die. As a result, the brains of people with Parkinson's disease contain almost no dopamine. Understanding Addiction: How Addiction Hijacks the Brain. 10 Adult ADHD Symptoms: Disorganization, Recklessness, and More. 10 Problems That Could Mean Adult ADHD continued... 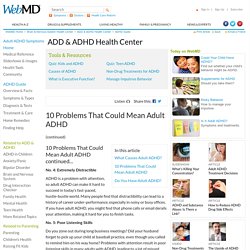 Adderall Tolerance - Dr. Roberta Foss-Morgan. Amphetamines cause your brain to be flooded with the neurotransmitters serotonin, dopamine, and norepinephrine. 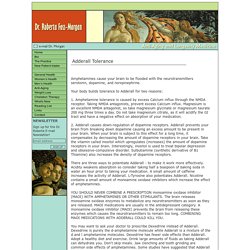 Your body builds tolerance to Adderall for two reasons: 1. Amphetamine tolerance is caused by excess Calcium influx through the NMDA receptor. Taking NMDA antagonists, prevent excess Calcium influx. Magnesium is an excellent NMDA antagonist, so take magnesium glycinate or magnesium taurate 200 mg three times a day. 2. Hunter vs. farmer hypothesis. The hunter vs. farmer hypothesis states that attention-deficit hyperactivity disorder (ADHD) in children and its counterpart in adults, the adult attention deficit hyperactivity disorder, have their origins in a tendency in those individuals for behaviors characteristic of hunter-gatherer societies over those of farming societies. 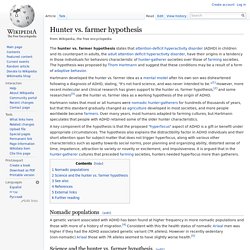 The hypothesis was proposed by Thom Hartmann and suggest that these conditions may be a result of a form of adaptive behavior. Hartmann developed the hunter vs. farmer idea as a mental model after his own son was disheartened following a diagnosis of ADHD, stating, "It's not hard science, and was never intended to be. The Rational Choices of Crack Addicts. Continue reading the main story Video Long before he brought people into his laboratory at to smoke crack cocaine, Carl Hart saw its effects firsthand. 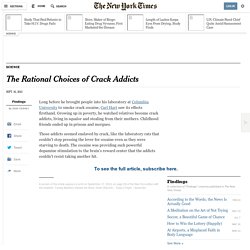 Growing up in poverty, he watched relatives become crack addicts, living in squalor and stealing from their mothers. Childhood friends ended up in prisons and morgues. Those addicts seemed enslaved by crack, like the laboratory rats that couldn’t stop pressing the lever for cocaine even as they were starving to death. The cocaine was providing such powerful dopamine stimulation to the brain’s reward center that the addicts couldn’t resist taking another hit. How to Harness Your Brain's Dopamine Supply and Increase Motivation. 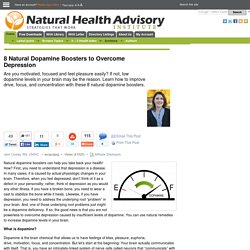 How? First, you need to understand that depression is a disease. In many cases, it is caused by actual physiologic changes in your brain.